The Road Not Taken: The Cost of 30 Years of Unsustainable Health Spending Growth in the United States

The United States has by far the most expensive health care system of any country in the world. Health spending constitutes more than 18 percent of the U.S. economy, compared with less than 10 percent in the average industrialized country. And not only is health spending high, it is projected to rise faster than gross domestic product over the next 10 years.

This growing commitment of resources inevitably means less money is available for other purposes. For families, it means more expensive insurance premiums, higher taxes, and lower wages. For federal and state governments, it means less funding for other public priorities like education and infrastructure. Looking to the future, projected federal budget deficits are primarily driven by rising health spending.

Other countries’ experiences can help us assess the opportunity cost of funneling such a large proportion of our resources to health care. Switzerland offers an instructive parallel, as its health system resembles our own in many ways. Swiss patients are usually able to choose any doctor, and have rapid access to specialist care. The Swiss buy private health plans through regional exchanges offered by competing insurers. The federal government provides sliding-scale subsidies for those with low incomes, much like the Affordable Care Act’s state insurance marketplaces that will be operating by 2014.

Switzerland also resembles the U.S. in that, over the past 30 years, we have had the two most expensive health care systems in the world. However, we have by now left even Switzerland far behind. In 1980, per capita spending in both countries was roughly equal; in 2010, U.S. spending surpassed Swiss spending by nearly $3,000 per person.

The difference in spending between the two countries allows us to put a price tag on how much our health care spending has exceeded that of every other country in the world. If we had spent only as much per person as Switzerland did over the past 30 years, we would have saved about $15.5 trillion.*

What could that $15.5 trillion buy if we had it today? It would be enough to transform our $11.6 trillion federal debt into a $3.9 trillion surplus. At current tuition levels, it would send over 175 million students to a four-year college. We could use it to cover an area the size of South Carolina with solar panels, generating more carbon-free electricity than the U.S. even uses. We could buy everyone in the world four iPads. 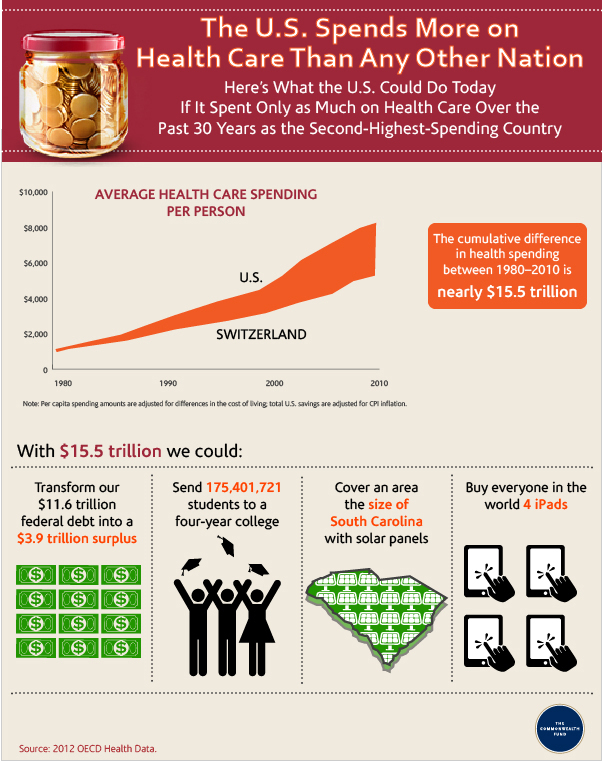 Why do we spend so much on health care? Contrary to what one might expect, the U.S. has one of the youngest populations among industrialized countries, and we go to the doctor and hospital relatively infrequently. Instead, research suggests that the difference in health spending between the U.S. and other countries largely comes down to higher prices. We spend more because our physician visits, hospital stays, pharmaceuticals, and procedures are more expensive.

The high cost of American health care would perhaps be justified if we received the highest-quality care and achieved the best health outcomes. Unfortunately, evidence suggests that the U.S. health system does not deliver notably superior care, and in fact lags other countries in important areas such as access, care coordination, and patient safety. Furthermore, people in the U.S. have significantly worse health outcomes than in most developed countries. Couple these failures with the fact that the U.S. is the only wealthy country that does not yet ensure universal insurance coverage, and the inefficiency of the U.S. health system comes into focus.

The Affordable Care Act, in addition to expanding and strengthening insurance coverage, contains a number of provisions to slow the growth of health care spending. These include new ways to pay for care that incentivize quality instead of quantity; the creation of transparent health insurance marketplaces to increase competition; incentivizing primary care and prevention; and the creation of an independent panel of experts to propose Medicare savings if spending increases faster than GDP plus 1 percent. In addition, the Commonwealth Fund Commission on a High Performance Health System has released a report proposing further payment and delivery system reforms and consumer incentives, which together could improve health system performance while generating $2 trillion in savings by 2023. The success of these and future reforms will be essential in ensuring we do not spend another 30 years moving further along our path of unsustainable health care spending.