On November 15, the health insurance marketplaces will open for the 2015 enrollment period. As many as 13 million people may have a plan through the marketplaces by the end of the three-month period. Among those will be people who are continuing their coverage and tax credits from last year. This “reenrollment” will be a first-time experience for the marketplaces and consumers, and it will be administratively complex for everyone.1 We take a look at the questions consumers should ask and what action they need to take to keep covered in 2015.

Will I Receive a Premium Tax Credit in 2015?

The U.S. Department of Health and Human Services (HHS) and the state marketplaces are now sending notices to people who received tax credits this year, informing them about open enrollment and the process for re-determining tax credit eligibility.2 The notices explain that because people receive their tax credits in advance of their income tax returns, it is critical that they update their income information with the marketplaces to avoid receiving tax credits that are too high or too low. At tax time, the IRS will reconcile people’s advance tax credits with their actual income, and enrollees will either receive a tax dividend if the credit was too low based on their actual income, or pay more in taxes if the credit was too high.

The marketplaces will send notices to people tailored to their personal circumstances:

Like most health insurance policies through employers, enrollment in marketplace plans lasts for one year. Consumers who still want coverage for 2015 can either reenroll in their current plan, if their insurer is offering the plan in 2015, or go back to the marketplaces and shop for a new plan.

Auto-enrollment. While consumers can shop for a new plan, HHS has sought to make the reenrollment process as automatic as possible. The Affordable Care Act’s consumer protections include “guaranteed renewal” of health insurance policies for individuals and employers who want to renew their policies. But insurers can discontinue plans, if they meet certain federal criteria. So some 2014 plans will not be available in 2015. The federal government requires carriers to follow a standardized process to help consumers auto-enroll in a new marketplace plan if they are interested in doing so. 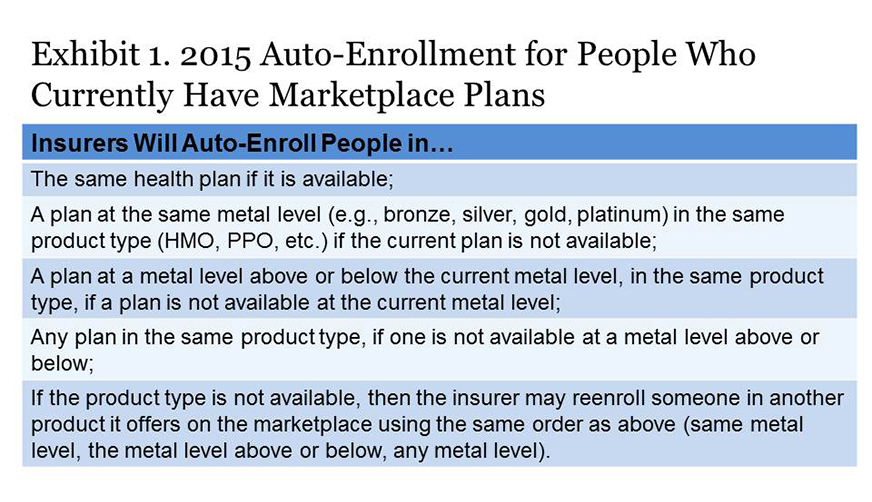 Insurer notices to consumers. HHS requires health insurers to send notices containing key information to people with health insurance through the marketplaces and the individual market outside the marketplaces by November 15.3 The notices will tell consumers whether their plan is available for renewal or is being discontinued, if they are being auto-enrolled in a new product, their plan’s 2015 premium, and other critical information. 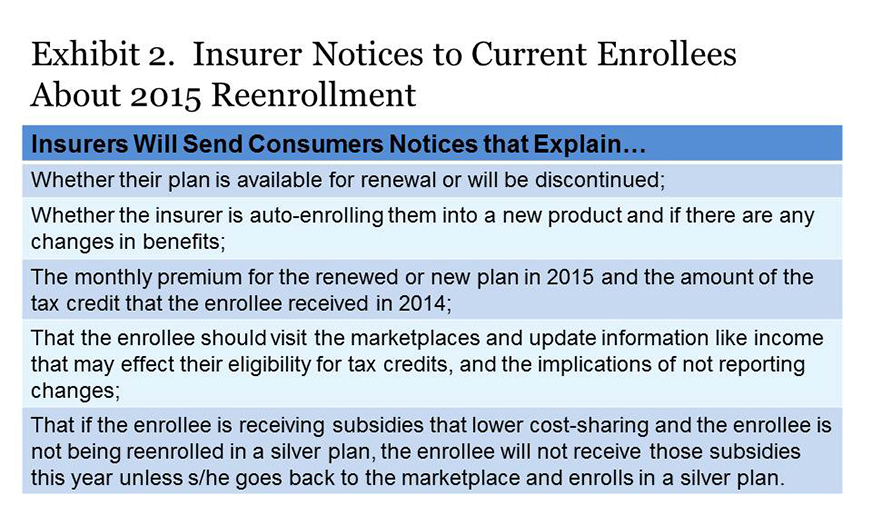 Will the Benchmark Plan Change in 2015?

The amount of someone’s tax credit is calculated as the difference between their required contribution as a share of their income (depending on their income, 2.01%–9.56% of income in 2015) and the premium of the second lowest-cost silver plan, a.k.a. the benchmark plan, sold in the marketplaces. People can apply their tax credit to any plan, with the individual paying the difference if the premium is higher than the benchmark, or pocketing the savings if it is lower.

Many state marketplaces could have a new benchmark plan in 2015 because of changes in relative premiums for plans offered on the marketplaces. This means that if someone stays in a plan that is no longer the second-cheapest silver (benchmark) plan, they will probably pay more in premiums this year.

What Is a Consumer to Do?

Consumers should carefully read notices they receive from the marketplaces and insurers this fall and return to the marketplaces to update their personal information on their applications by December 15. While it may be easiest to auto-enroll for 2015, consumers will likely get the best deals by fully exploring this year’s plan options in the marketplaces. The considerable complexities of this first reenrollment period are nearly certain to create confusion. It is essential that consumers go to the marketplace websites and/or call the phone numbers listed in these notices. They can also seek assistance from navigators and insurance brokers if necessary.

Consumers should also remember that in the pre-ACA world, purchasing individual health insurance policies was every bit, and perhaps more, complicated than it is in the marketplaces this year. Consumers did not have any help defraying premium expenses; there was no place to go for comparative information on the content or value of plans; and they could be denied coverage if they had preexisting conditions.

1For a thorough review of the federal rules and guidance on 2015 reenrollment and re-determination, see Timothy Jost’s series of blog posts on the Health Affairs website, http://healthaffairs.org/blog/2014/10/16/implementing-health-reform-renewing-coverage-for-2015/.

2Notices are also being sent to people who enrolled in marketplace plans but did not receive a tax credit.

3HHS has created standardized notices that insurers may use this year, and are required to use next year.