The number of uninsured Americans fell in early 2014, according to the first federal survey estimates since the Affordable Care Act's major insurance expansions went into effect. Data from three separate surveys from the U.S. Census Bureau and the National Center for Health Statistics (NCHS) were released today. Because the surveys interviewed people before the end of the first open enrollment period, they provide a limited picture of the effects of the law on coverage this year. But the findings nevertheless underscore similar declines in the number of uninsured found by recent national surveys conducted by The Commonwealth Fund, Gallup, RAND, and the Urban Institute. As a group, these government and private surveys confirm that the law is having its intended effect of reducing the number of Americans who lack health insurance.

National Health Interview Survey (NHIS) finds that the number of uninsured began to fall as early as February. Of the three surveys released today, the NHIS provides the most current estimates as well as the longest trend data. Based on interviews of 27,627 people in the first three months of 2014, the survey finds that the number of uninsured people under age 65 fell from 44.3 million in 2013 to 40.7 million over the three-month period in 2014 (Exhibit 1). Among adults ages 18–64, uninsured rates fell from 20.4 percent to 18.4 percent, which is a decline of about 3.8 million uninsured adults—less than recent estimates found in the four private surveys that were conducted later in 2014 (Exhibit 2). 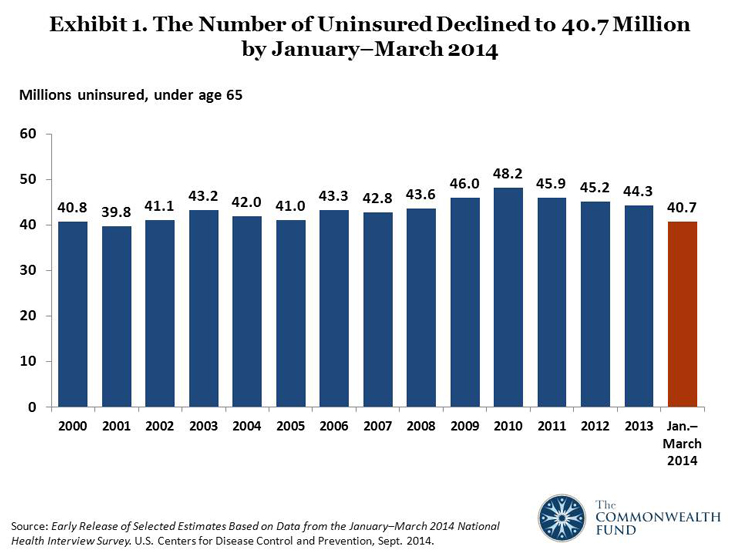 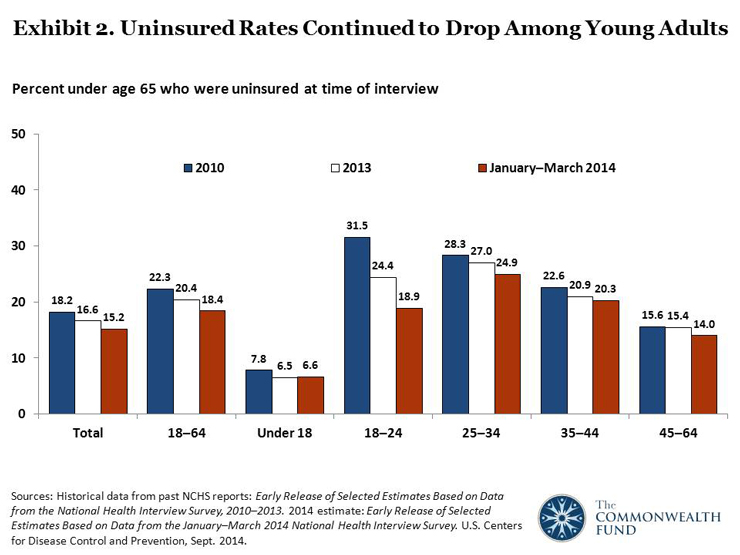 The Commonwealth Fund found the uninsured rate for adults ages 19–64 declined from 20 percent just prior to open enrollment to 15 percent in April–June 2014, which is an estimated decline of 9.5 million people. Gallup, RAND, and the Urban Institute survey estimates from a similar time period show uninsured rates of 13.4 percent to 15.8 percent, with declines of 8 million to 9.3 million uninsured adults. The NHIS estimates, which reflect coverage levels in February, do not fully capture the surge in enrollment that occurred at the very end of the enrollment period in late March, as well as people who were granted extensions to complete their enrollment in April, and Medicaid enrollment that is continuous.

Young adults, African Americans, Latinos, and adults with low and moderate incomes made gains. The data show that the coverage gains made by young adults that began in 2010, as millions stayed on or enrolled on a parent’s plan, accelerated in 2014 with the introduction of the law’s new subsidized coverage options (Exhibit 2). Uninsured rates among 18–24-year-olds fell from 31.5 percent in 2010 to 18.9 percent in the first three months of 2014. The new coverage options benefited other groups at high risk of lacking health insurance: adults with low and moderate incomes, African Americans, and Latinos (Exhibit 3). But the data suggest these higher-risk groups may not have seen improvements in every state: uninsured rates fell in states that have expanded eligibility for their Medicaid programs but did not significantly change in states that have not yet done so (Exhibit 4). 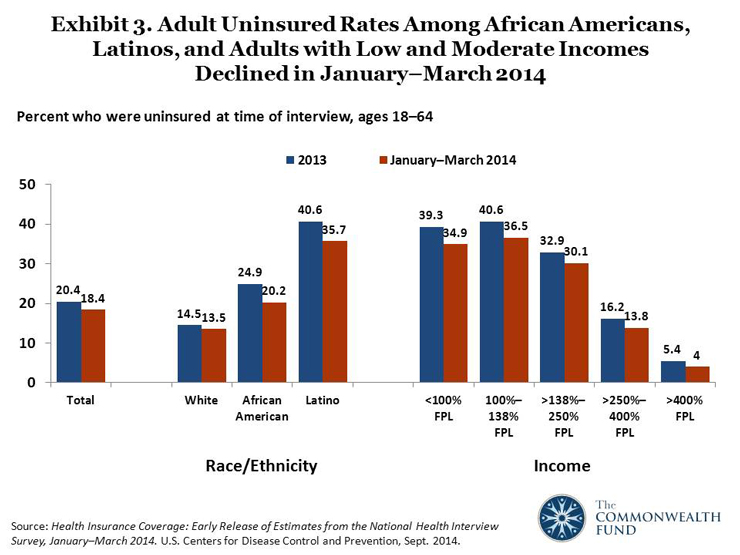 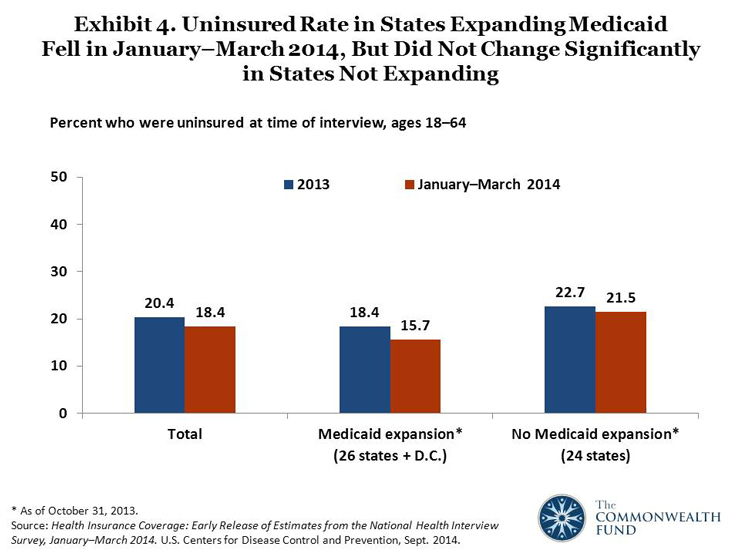 Current Population Survey (CPS) finds similar uninsured rate in early 2014. In a major revamping of its question on health insurance coverage in the annual March Supplement of the Current Population Survey (CPS), the Census reported that 15.8 percent of the under-65 population and 18.5 percent of the 18–64 population were uninsured from February to April 2014, nearly the same rates shown by NHIS for the first three months of the year. The survey of about 68,000 people found that in 2013, an estimated 41.3 million people under age 65, or 15.3 percent, were uninsured for the full year.

A new question and a break in the trend. The uninsured estimates in the annual supplement have long been the most widely reported measure of health insurance coverage in the United States. Over the supplement’s 26-year history, Census has periodically adjusted its question on health insurance to improve estimates. This year Census implemented a near-full replacement of its question, and thus reports estimates for the time periods covered by the new question only: current coverage in 2014 and coverage for the prior 12 months in 2013. This will be Census’s new benchmark estimate for measuring the effects of the Affordable Care Act in the coming years.

American Community Survey (ACS) finds most states with above-average uninsured rates have yet to expand their Medicaid programs. This massive federal survey of 3.5 million people places the number of uninsured people in the United States at 45.2 million in 2013, or 14.5 percent of the full population, down from 15.5 percent in 2010. Because of its size, the ACS provides estimates of health insurance coverage at the national, state, metropolitan, and county levels, and by Congressional district. Across the country in 2013, 17 states had uninsured rates that exceeded the national average (Exhibit 5). Of those, 11 have yet to expand eligibility for their Medicaid programs. 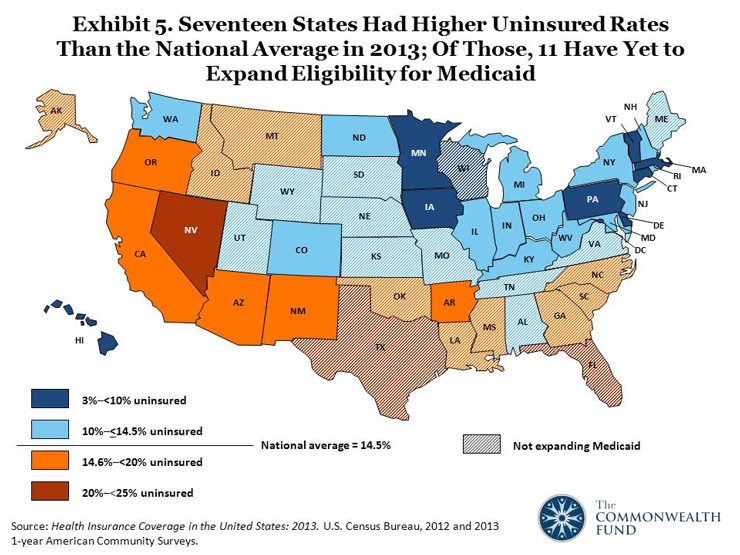 Looking forward. Federal survey data releases on health insurance coverage over the next 12 months will be dominated by NHIS survey results which will be released according to the following schedule:

Over the next year, smaller nationally representative surveys from private organizations like The Commonwealth Fund will fill in the information gaps—providing the data necessary to assess the effects of the law on Americans’ health insurance coverage and access to care at this early but critical stage of the rollout.