New regulations issued by the Department of Health and Human Services (HHS) show that laws in more than a dozen states may be invalid because they go too far in restricting the work of consumer assistance personnel certified under the Affordable Care Act (ACA).

Navigators, certified application counselors, and other assisters are tasked under the ACA with helping consumers understand their insurance options and make informed decisions about what coverage is right for them. Federal rules released last year established a variety of eligibility, training, and conduct standards that assisters must meet. These regulations required assisters to provide fair, accurate, and impartial help and prohibited them from steering consumers to particular health plans. But the rules also warned about overregulation from the states, noting that state restrictions that prevent assisters from doing their jobs would violate federal law. In May, HHS published additional regulatory guidance indicating that burdensome requirements in many states may do just that.

State navigator laws have proliferated. While some states embraced assister programs, others have regarded them warily, with skepticism concentrated in states that ceded responsibility for developing an insurance marketplace to the federal government. To date, 19 states with federally facilitated marketplaces have acted to restrict the work of consumer assisters in ways that exceed the federal regulatory framework. Three of these states have legislation pending that would impose additional constraints, while three others that have not adopted state-specific requirements are considering them (Exhibit 1). 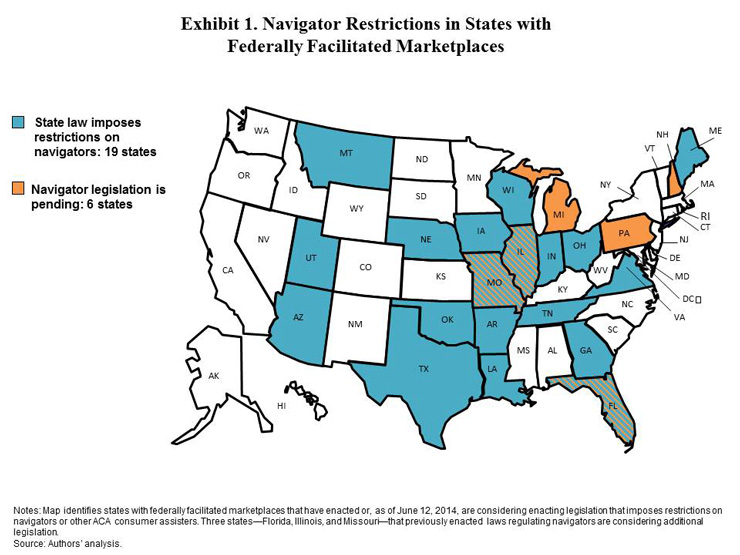 How far may states go to restrict navigators? States have flexibility to supplement federal navigator standards. However, they may not place burdens or limitations on navigators that undermine navigators' ability to provide the consumer assistance required of them by federal law. The question of whether certain state restrictions cross this line has generated considerable confusion, making it hard for navigators to know what they can and cannot do to help consumers. Meanwhile, early evidence suggests that some of these state rules may have discouraged assistance efforts in the run-up to open enrollment for the ACA’s insurance marketplaces. In January, in the first judicial ruling on this contentious issue, a federal court in Missouri blocked enforcement of that state’s navigator rules, concluding that they violated federal law.

New federal rules supply greater clarity. The revised regulations from HHS offer important guidance regarding federal and state authority to regulate health reform assisters. On one hand, the new regulations create additional federal obligations that navigators and other consumer assisters must satisfy and amplify federal enforcement powers to discipline those who violate these requirements. On the other, the regulations describe several types of state restrictions that, because they prevent assisters from complying with their federal responsibilities, are invalid. This—non-exhaustive—list includes state rules that:

Importantly, the regulations also recognize that some state standards that may be permissible on their face may be unduly burdensome—and therefore unlawful—as applied in practice.

What do the rules tell us about existing state laws? In the view of federal officials, a number of state navigator requirements conflict with the ACA. Our analysis of the new rules reveals that portions of laws and regulations in at least 15 states may impermissibly restrict consumer assisters (Exhibit 2).

Exhibit 2: State Restrictions on Consumer Assisters that May Conflict with the ACA

Looking forward. HHS is responsible for administering many aspects of the ACA. This includes the law’s assister programs and its “preemption provision,” the part that says that state laws which conflict with the ACA must be set aside. Because of the agency’s special role, courts are likely to defer to its interpretation of the health law—including its views regarding the federal responsibilities that assisters must meet, and the kinds of state restrictions that would prevent them from doing so. The new rules from HHS thus shed valuable light on the scope of state authority to regulate assisters, and should aid policymakers as they determine whether and how to do so, going forward.

The rules also should have a significant impact on existing state restrictions through traditional policymaking channels and, in some instances, through litigation. With the benefit of additional guidance found in the rules, state officials may reevaluate their requirements for assisters and, where necessary, revise the regulatory framework to ensure it does not conflict with federal law. And, in states with restrictions that fall squarely within one of the categories described by the federal regulations, assisters now have a potentially decisive basis on which to argue, to a court, that those limitations should be struck down.

Learn more about navigators in our New Directions in Health Care podcast.