Some groups have urged the Obama administration to raise the full-time definition above 30 hours per week, arguing that employers will otherwise reduce worker hours to avoid the mandate penalty. Selecting a threshold above 30 hours (say 40 hours) will, they believe, minimize this incentive because workers with longer work weeks are already more likely to be offered health insurance by their employers.

It’s true that coverage rates rise with weekly hours of employees (see Exhibit 1), but that doesn’t clinch the argument. On the contrary, a study my colleague and I conducted found that increasing the threshold would not only subject a much larger proportion of workers to having their hours cut, but would also increase the federal costs of health reform. 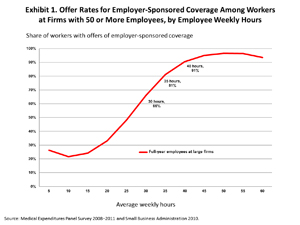 Among full-year employed workers in firms with 50 or more employees, 48 percent work exactly 40 hours per week, with another 3 percent working slightly more (41–44 hours). Most of these workers are offered health coverage by their employer, but about 9 percent are not. While this may not seem like a large percentage, it actually translates into a lot of workers—about 2.6 million Americans, among whom about 2.5 million work exactly 40 hours (see Exhibit 2). 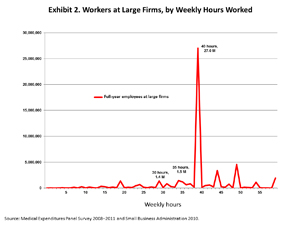 Raising the threshold would also raise the federal costs of health reform. As the full-time threshold rises, so does the number of uninsured workers eligible for coverage on the Affordable Care Act’s health insurance marketplaces, or exchanges (see Exhibit 3). Most employees with incomes below 400 percent of the federal poverty level (FPL) not offered coverage through their employer can apply for tax credit subsidies to help pay for the private health plans they buy through the exchange. So raising the hours threshold adds hundreds of thousands of people to the pool of workers eligible for subsidies. Even without employer changes to work schedules, over 500,000 more workers employed between 30 and 40 hours a week could qualify for exchange subsidies at a threshold of 40 hours rather than at the current 30-hour threshold (see Exhibit 3). More than half of these workers are employed 30–35 hours a week and would qualify for subsidies at a 35-hours-a-week threshold. 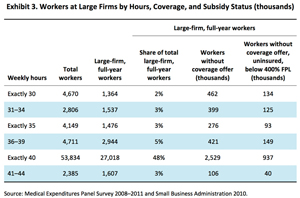 Appendix
This study combines small-firm-size employment data from the Small Business Administration (SBA), provided by the U.S. Census Bureau, Statistics of U.S. Businesses (SUSB) 2010, and firm size, insurance coverage, income, weekly hours, and employer insurance offer information from the Medical Expenditures Panel Survey (MEPS) consolidated full-year files from 2008 to 2011. To identify workers at applicable large firms, SBA data that provided employment levels at intervals as small as 45 to 49 and 50 to 74 workers was merged with MEPS firm size data at unit level, and smoothed using a negative binomial regression model over firm sizes 2 to 200. Public administration, self-employed, and agricultural workers are excluded for consistency between MEPS and SUSB worker definitions. Average hours of staff below 30 hours per week are included in the calculation of full-time equivalent employees as it pertains to calculating full-time and full-time-equivalent firm size. Consistent with the look-back period defined in regulations for the employer mandate, employees averaging 30, 35, and 40 hours over a full year are studied. Detailed information from MEPS about insurance coverage, employer offer, and income level is used to calculate rates of characteristics of interest across weekly hours. Rates are produced using a cubic probit regression model and calibrated with full-year employment levels at each unit of hour per week work schedules. Employer offer information not ascertained in the MEPS survey is calculated using a logit regression model including known offer rates, firm size, weekly hours, wage, marital status, industry category, and insurance coverage status information drawn from MEPS.

1 We choose to look at a reduction of five hours because it is equal to one hour per day for a full-time worker. In addition, Garicano et al. find that the effect of regulations with a firm size threshold affects only workers in a narrow band around that threshold. See Garicano, Luis, Claire Lelarge, and John Van Reenen. Firm size distortions and the productivity distribution: Evidence from France. No. w18841. National Bureau of Economic Research, 2013.

S. Glied and C. Solis-Roman, Why Changing the Definition of Full-Time Work Under the ACA Will Put More Workers at Risk and Increase Federal Spending, The Commonwealth Fund Blog, January 2014.