Financial Assistance for Marketplace Health Plans: What Consumers Should Know 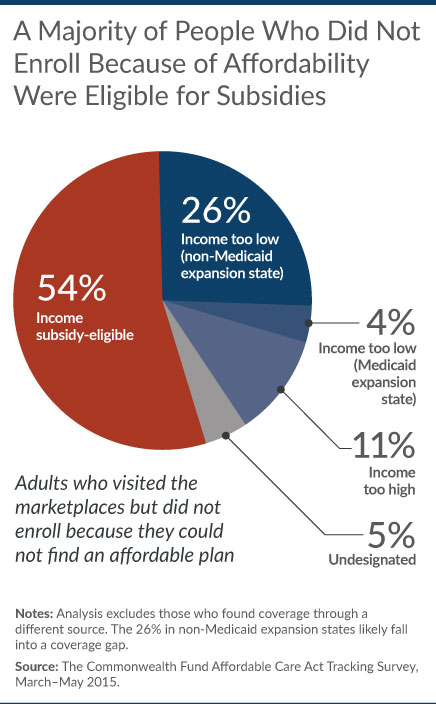 This week, the health insurance marketplaces began selling coverage that starts January 1. The U.S. Department of Health and Human Services estimates that between 9.4 million and 11.4 million people will be enrolled in marketplace plans by the end of 2016.1 As in the past, many will consider affordability first when selecting a health plan or, in some cases, deciding whether to go to the marketplaces at all. But prospective shoppers, particularly those with low incomes, shouldn’t assume they can’t afford a plan: For many, financial assistance is available.

Americans with incomes between $11,770 and $47,080 (100% to 400% of the federal poverty level) who enroll in a marketplace plan are eligible for a premium tax credit. Recent survey research by The Commonwealth Fund has found that these subsidies make marketplace plan premiums comparable to premiums paid by those who have employer coverage.

Unfortunately, it appears that many people don’t know about this financial help. The Commonwealth Fund Affordable Care Act Tracking Survey found that as of last spring, only 46 percent of uninsured adults were aware of the financial assistance available under the health reform law. Furthermore, more than half of those who visited the marketplace but did not enroll last year said they weren’t able to find an affordable plan. But we found that most of these people had incomes that made them eligible for premium subsidies. What remains unclear is whether this group viewed their costs as unaffordable even with the subsidies, or if they did not know how low their subsidized premium would be.2

People who purchase silver plans through the marketplaces and whose income is between $11,770 and $29,425 (100% and 250% of poverty) are also eligible for subsidies to lower their deductible and copayments. Yet, not everyone who is eligible for these cost-sharing subsidies is enrolled in a silver-level plan. In the Fund’s survey, 24 percent of people with marketplace plans who met the income requirements for the cost-sharing subsidies said they were enrolled in a bronze plan.3 Either people are not aware of these subsidies, or they opt for a bronze plan to get a lower premium, even though those plans come with higher deductibles. As a result, they miss out on the cost-sharing subsidies and may pay more out of pocket for care than if they were enrolled in a silver plan. In the same survey, premium costs, on average, mattered more to people than the deductible when choosing a plan.

How Some States Are Helping Consumers 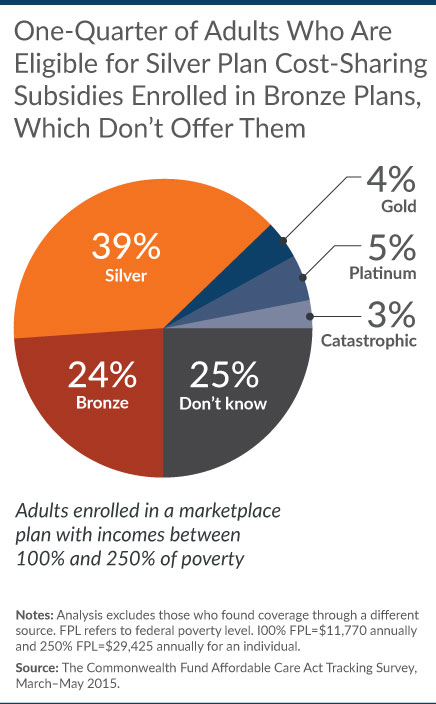 2013 to 12 percent in 2014. Still, only 38 percent of enrollees took up cost-sharing subsidies.4 To encourage more to do so, people with incomes that make them eligible for cost-sharing subsidies now see silver-level plans displayed first in Kynect’s prescreening and shopping process, along with information explaining that the subsidies are only available with silver plans.5

The Obama Administration estimates that about 10.5 million uninsured people are eligible for marketplace health plans this year, and that between 2.8 million and 3.9 million will enroll. The administration’s relatively low projection for new enrollees is partly because of its realization that the remaining uninsured are very difficult to reach.

In an effort to reach this group, this year the federal and state marketplaces are rolling out targeted outreach campaigns and collaborating with community partners to provide people with the support they need to enroll in plans that fit their needs and budgets. It will be important for governments and stakeholders to share information on what approaches work best this year and apply those practices broadly in 2017.

1 Office of the Assistant Secretary for Planning and Evaluation. “How Many Individuals Might Have Marketplace Coverage at the End of 2016?” Oct. 15, 2015.

2 Some adults in this group may not be eligible for subsidies because under current law undocumented immigrants are not eligible for either the law’s Medicaid expansion or marketplace plans.