What Happens If the ACA’s Tax Credits Are Replaced with Premium Support?

Under the Affordable Care Act (ACA), tax credits for purchasing health insurance in the marketplaces are designed to limit enrollees’ premium contributions to a percentage of their income.1  Critics who want to repeal and replace the law have advanced a “premium-support” model, in which tax credits are fixed amounts for enrollees regardless of their premium costs. We have conducted an analysis that indicates that these premium-support models could place financial burdens on low-income and older individuals.

With ACA tax credits, individuals earning $22,340 pay no more than 6.3 percent of their income (approximately $125 monthly) and receive a monthly tax credit of $175 if the state’s benchmark plan premium is $300. The $175 tax credit can be applied toward any plan offered in the marketplace. People with incomes between $11,770 and $47,080 (100% to 400% of the federal poverty level) and without an affordable offer of coverage from another source are eligible for the credits. We analyzed the effects of replacing the ACA premium tax credits with two premium-support alternatives: 1) a flat tax credit of $2,500 for an individual or $5,000 for a family and 2) a means-tested tax credit that is also adjusted by the age of the oldest family member.

Under the flat tax, individuals and families receive a fixed amount independent of age or income. By contrast, the value of the means-tested credit increases with age and decreases with income; those with incomes exceeding $35,310 (300 percent of the federal poverty level) are ineligible for tax credits. Our analysis focuses on how replacing the ACA’s tax credit approach with one of the premium-support alternatives would affect premium contribution amounts and enrollment, assuming that all other provisions of the ACA, including the individual mandate, Medicaid expansion, cost-sharing subsidies, and health insurance rating reforms, remain in place.

The flat tax we modeled is based on a plan advanced by Sen. John McCain during the 2008 presidential campaign. The means-tested tax credit is based on another plan, the Patient Choice, Affordability, Responsibility, and Empowerment Act, proposed in 2014 and updated earlier this year.2  (Presidential candidates Sen. Marco Rubio and Gov. Jeb Bush have made similar proposals.3)

Within each age group, we also assess how the tax credit varies by family income. The ACA provides the largest subsidies for low-income enrollees; the means-tested tax credit that we consider is less progressive than the ACA, while the flat tax credit does not discriminate by income.

Figure 1 – Forecasted Impact on the Number of Uninsured, by Age 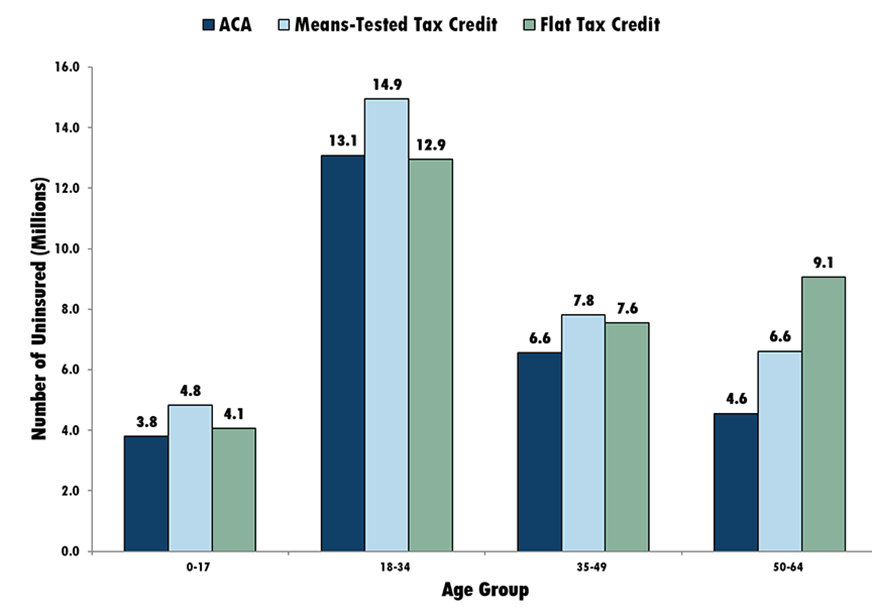 Source: Authors’ estimates based on the RAND COMPARE model


As policymakers consider alternatives to reduce the federal government’s financial burden from providing subsidies under the ACA, they should consider the consequences for enrollees. Our analysis indicates that although existing premium-support models yield considerable savings for the federal government, they could create age and income disparities in coverage. Refinements to premium-support approaches, such as increasing the amount of the tax credit with age and allowing individuals with incomes up to 400 percent of the federal poverty level to receive tax credits, could moderate some of these concerns.

This post is the third in a series analyzing proposals that seek to change provisions in the ACA. Also read: The Ramifications of Repealing the Individual Mandate and Charging Older Adults Could Cost Taxpayers.

1The cost of the second-lowest cost silver plan in the individual’s marketplace.

2Note that we are not modeling the overall plans proposed by Sen. McCain, or Sens. Burr and Hatch, and Rep. Upton (who authored the Patient Choice, Affordability, Responsibility, and Empowerment Act); rather, we are replacing the ACA’s subsidy formula with a means-tested tax credit and flat tax credit, respectively, while leaving the remaining provisions of the ACA in place. Sen. Marco Rubio endorsed a flat tax credit and Gov. Jeb Bush, has advanced a plan to provide age-based tax credits that do not vary by income.

3Sen. Marco Rubio endorsed a flat tax credit and Gov. Jeb Bush, has advanced a plan to provide age-based tax credits that do not vary by income.

E. Saltzman and C. Eibner, "What Happens If the ACA’s Tax Credits Are Replaced with Premium Support?," The Commonwealth Fund, Nov. 24, 2015.