Large Majority of Affordable Care Act Coverage Enrollees Are Satisfied with Their Insurance, People Using Plans Are Getting Care They Could Not Have Afforded Before

Commonwealth Fund’s Latest ACA Tracking Survey Finds Uninsured Rate Down from 20% to 13% Since 2013; Most Newly Insured Had Lacked Coverage for at Least One Year

New York, NY, June 12, 2015—A large majority (86%) of people who are currently insured through the Affordable Care Act (ACA) marketplaces or newly insured in Medicaid are very or somewhat satisfied with their new health care coverage, according to a Commonwealth Fund report out today. Nearly seven in 10 (68%) adults with new coverage have used it to get health care, and of those more than three in five (62%) previously would not have been able to obtain or afford that care. 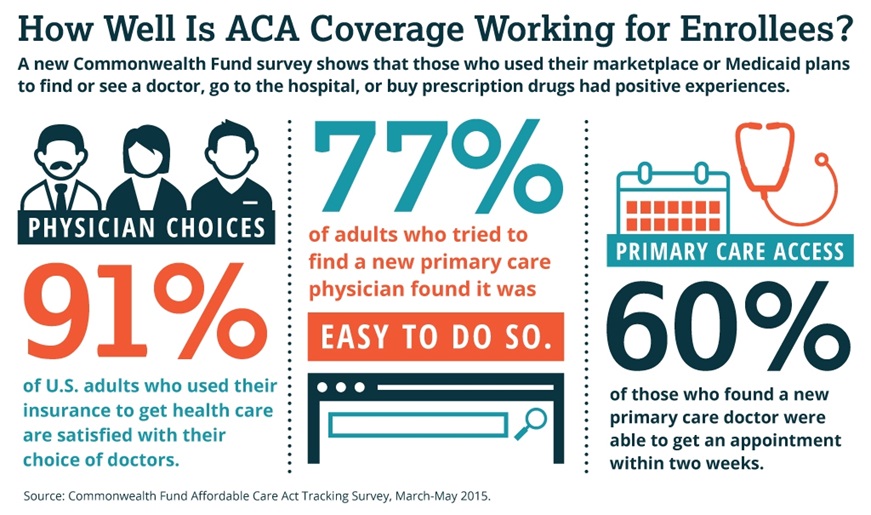 The report, Americans’ Experiences with Marketplace and Medicaid Coverage, presents findings from The Commonwealth Fund’s third Affordable Care Act Tracking Survey. Fielded between March and May of 2015, the latest survey tracks how working-age adults who have marketplace or Medicaid coverage through the ACA are using their new insurance to get health care. It also asks people how they view their health plan and physicians.

“The Affordable Care Act’s coverage expansions have been in place for nearly 18 months, and indications are that the newly insured are pleased with their coverage and are using it to get needed health care,” said Commonwealth Fund President David Blumenthal, M.D. “It will be essential to continue monitoring progress to ensure the law is delivering the affordable, comprehensive health insurance it promised.”

Who Has New Coverage Under the ACA?

Uninsured rates for lower-income adults are still high in the 22 states that have not expanded Medicaid as the ACA allows. These remaining uninsured are disproportionately young, low-income, and Latino.

“The survey indicates that the Affordable Care Act is helping many people who had been uninsured for a long time gain coverage and get health care,” said Sara Collins, Vice President for Health Coverage and Access at The Commonwealth Fund and the report’s lead author. “People living in states that expanded Medicaid are benefitting substantially, while large numbers of low-income adults who live in states that haven’t expanded the program remain uninsured.”

The report notes that the millions of uninsured who remain will continue to be at risk. Many live in states that have not expanded Medicaid and will be unable to afford insurance until state policies change. In addition, many people who are still uninsured are not aware of the marketplaces or think they won’t be able to afford coverage. Expanding Medicaid programs in all states, along with raising awareness among those eligible for ACA coverage, would likely further reduce the uninsured rate, the authors say.

Finally, the Supreme Court’s upcoming King v. Burwell ruling looms as a serious issue for people in the 34 states with federally run marketplaces. If the Court rules against the government, 6.4 million people could potentially lose the subsidies that help them pay for health insurance.