If it becomes law, the American Health Care Act (AHCA), as passed by the U.S. House of Representatives, could cause an estimated 924,000 jobs to disappear by 2026 and trigger an economic downturn in nearly every state, according to a report published today by researchers at George Washington University’s Milken Institute School of Public Health and The Commonwealth Fund. States that expanded their Medicaid coverage are likely to experience more severe losses. Seven states—Arkansas, Illinois, Indiana, Michigan, New Hampshire, New Mexico, and Washington—have laws that will automatically reverse their expansions if the federal government changes what it pays toward Medicaid.

The report, The American Health Care Act: Economic and Employment Consequences for States, evaluates the AHCA’s impact on states’ economies. It estimates that if the AHCA is enacted in its current form, gross state products—an economic measure akin to gross domestic product—could fall by $93 billion by 2026, and state business output could fall by $148 billion. The job losses and economic slowdown would not happen everywhere right away, since the tax repeals in the law would lead to an initial period of economic growth and job creation in some states and sectors. However, the uptick would be short-lived, as the legislation’s deeper cuts in funding for health insurance and job losses begin and then accelerate. 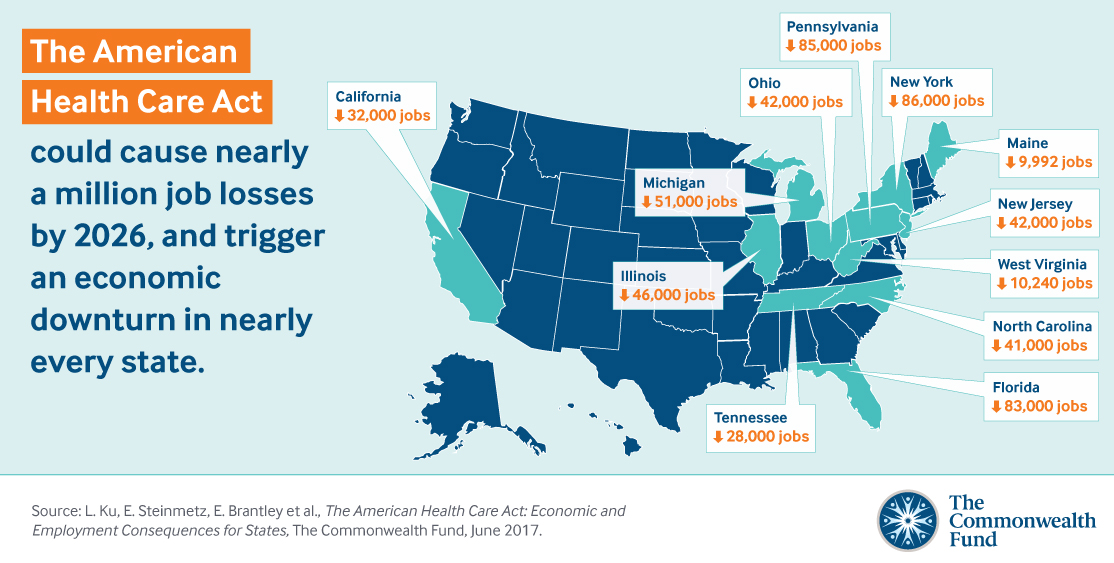 “The AHCA would initially cause a brief spurt of economic growth from tax cuts, which primarily help those with high incomes. However, cuts in funding for Medicaid and health subsidies then begin to deepen, triggering sharp job losses and broad disruption of state economies in the following years,” said Leighton Ku, Ph.D., Director of the Center for Health Policy Research at the Milken Institute School of Public Health and lead author of the report. “Within a decade, almost a million fewer people would have jobs. The downturn would hit the health care sector and states that expanded Medicaid the hardest.”

The primary cause of the loss of jobs and harm to state economies is the large reduction in funding for health care, particularly cuts in Medicaid funding and reduced funding for tax subsidies to help people purchase health insurance. The coverage-related losses amount to 1.9 million jobs lost by 2026 and almost $400 billion in business output. These losses are partially offset by tax reductions.

Health-sector employment would fall immediately in 2018 in 17 states: Arkansas, Florida, Illinois, Indiana, Iowa, Kentucky, Maine, Michigan, Missouri, New Hampshire, New Mexico, North Carolina, Ohio, Oregon, Washington, West Virginia, and Wisconsin. The losses would continue for all the states, up to a total of 725,000 jobs by 2026. Hospitals, health systems, clinics, and pharmacies might be forced to close or lay off staff as federal funding for health care is cut and the number of uninsured patients grows. The Congressional Budget Office (CBO) says the AHCA would increase the number of uninsured Americans by 23 million by 2026.

“The Affordable Care Act enabled the U.S. to make substantial gains in health insurance coverage and led to nationwide improvements in health care access and affordability for millions of people,” said Sara Collins, Vice President for Health Care Coverage and Access at the Commonwealth Fund. “The deep coverage losses projected under the American Health Care Act would be damaging both to the health of Americans and the state economies in which they work.”

The authors note that this analysis does not take into account any changes the Senate may make to the law or whether or when the AHCA or an alternate bill is passed into law. Other actions could also determine the economic impact of such legislation. For example, in late May the Trump administration released its budget, which calls for an additional $610 billion in Medicaid cuts—beyond those called for if the AHCA is passed. Such deep reductions in Medicaid spending would increase the employment and economic losses forecast by the current study.

The full report, along with detailed findings for every state, is now available.