Across the country’s four largest states, uninsured rates vary for adults ages 19 to 64: 12 percent of New Yorkers, 17 percent of Californians, 21 percent of Floridians, and 30 percent of Texans lacked health coverage in 2014. Differences also extend to the proportion of residents reporting problems getting needed care because of cost, which was significantly lower in New York and California compared with Florida and Texas. Similarly, lower percentages of New Yorkers and Californians reported having a medical bill problem in the past 12 months or having accrued medical debt compared with Floridians and Texans. These differences stem from a variety of factors, including whether states have expanded eligibility for Medicaid, the state’s uninsured rate prior to the Affordable Care Act taking effect, differences in the cost protections provided by private health insurance, and demographics.

The Affordable Care Act has had profound implications for health insurance coverage in the United States. More than 25 million Americans now have coverage under its provisions, which include the expansion of Medicaid eligibility, subsidized private plans purchased in the health insurance marketplaces, and—for young adults up to age 26—the opportunity to enroll in a parent’s plan.1 A recent analysis of the Commonwealth Fund Biennial Health Insurance Survey indicates that the percentage of uninsured adults has dropped from 20 percent in 2010 to 16 percent in 2014.2 The law, however, gives states flexibility in implementing its provisions, including the choice of operating their own health insurance marketplace or leaving that task to the federal government. Moreover, in 2012, the U.S. Supreme Court gave states the power to decide whether or not to expand Medicaid eligibility to more lower-income adults. States’ policy choices, combined with each state’s unique demographic characteristics and history, have resulted in a wide range of experiences among Americans since the law took effect. In this brief we use data from the Biennial Survey to examine differences in health insurance coverage, cost-related problems getting needed care, and medical bill problems and debt among adults ages 19 to 64 in the nation’s four largest states.

The four largest states in the U.S.—California, Florida, New York, and Texas—fall into two distinct categories. The first group is represented by California and New York, both of which are operating their own health insurance marketplaces and have expanded eligibility for Medicaid to adults who earn at or below 138 percent of the federal poverty level—about $16,000 for an individual or $32,000 for a family of four.3 Florida and Texas, the second group, are using the federal marketplace to enroll residents in health plans and have declined to expand Medicaid eligibility. In this new analysis of data from the Commonwealth Fund Biennial Health Insurance Survey, we find that, in 2014, there were larger shares of uninsured adults in Florida and Texas compared with California and New York. In addition, adults in Florida and Texas were more likely to report not getting needed care because of cost and to report having problems paying medical bills.

Texas Has Highest Uninsured Rate of the Four Largest States

Among the four states, the proportion of working-age adults without health coverage in 2014 was highest in Florida and Texas, at 21 percent and 30 percent, respectively (Exhibit 1). California’s uninsured rate was 17 percent, while New York’s was 12 percent.4,5,6 While this study did not examine trends at the state level, federal survey data indicate that since the Affordable Care Act’s passage, uninsured rates declined in all four states, with California registering the greatest decrease.7 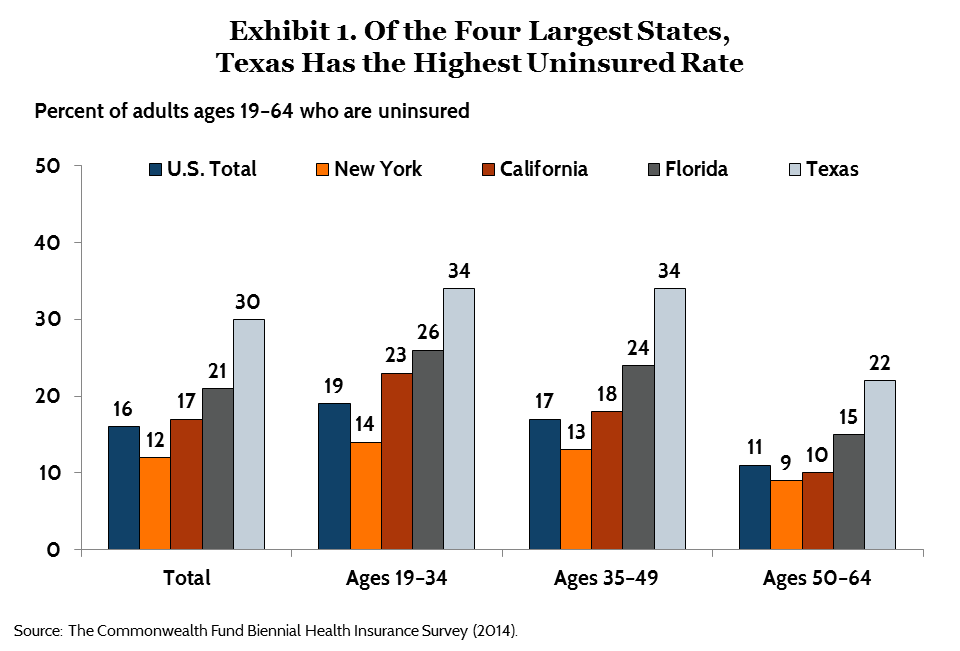 Young adults have experienced the largest gains in coverage nationally. According to the survey, by 2014, the national uninsured rate for 19-to-34-year-olds was 19 percent. This was down from 27 percent in 2010, the year adult children became eligible to remain on parents’ health plans to age 26.8 There are differences among the four states. In New York, 14 percent of young adults were uninsured in 2014, compared with 34 percent in Texas, 26 percent in Florida, and 23 percent in California.

There are also significant differences in coverage rates for adults with low incomes. Adults with incomes below 100 percent of the federal poverty level—that is, $11,490 for an individual or $23,550 for a family of four—are faring best in New York and California (Table 1). Thirteen percent of low-income New Yorkers and 23 percent of low-income Californians are uninsured, compared with 33 percent of low-income adults in Florida and 51 percent in Texas. Even before the passage of the Affordable Care Act, both New York and California had established Medicaid eligibility levels that were more generous than most states. And under the health reform law, both states expanded eligibility for Medicaid up to 138 percent of poverty, while Florida and Texas did not. 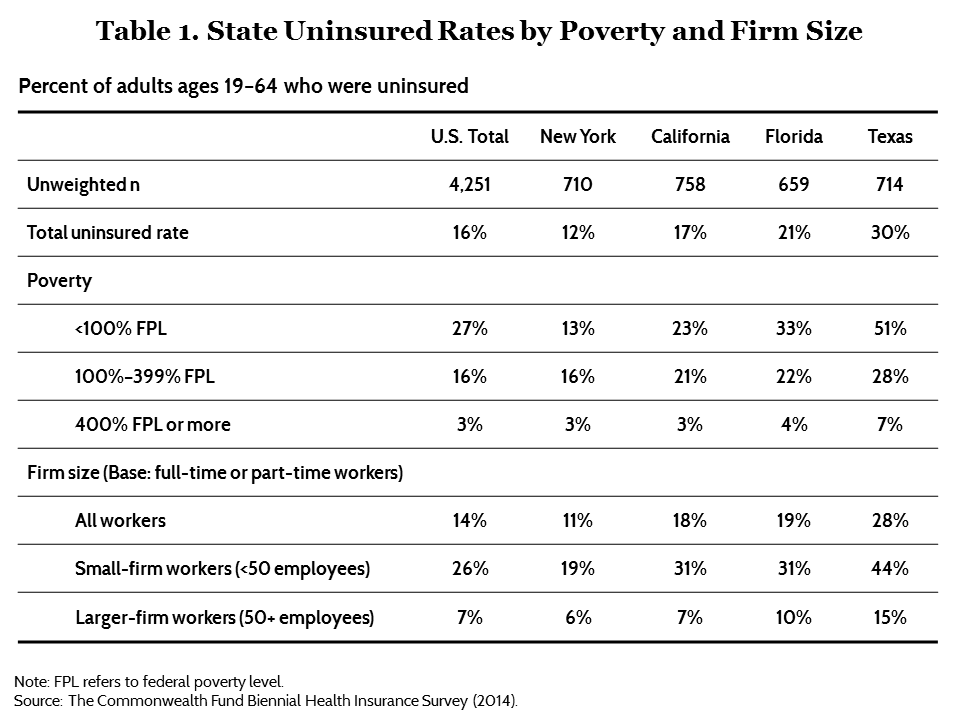 In addition to policy decisions, demographics also likely contribute to differences in insurance coverage rates, although they do not explain the state differences completely. For example, undocumented immigrants are ineligible for subsidized coverage or Medicaid under the law. In Texas, adults below 100 percent of poverty are much more likely to be foreign-born than are adults with incomes between 100 percent and 399 percent of poverty (35% vs. 26%) (data not shown). People born outside the United States but who reside here now are much more likely to be uninsured than those born in the U.S. (31% vs. 12%) (data not shown).13

New York and California: Lower Rates of Problems in Getting Needed Health Care Because of Cost

Across the country, expanded insurance coverage is helping people get the care they need by reducing financial barriers to care. The survey asked adults about delaying or skipping needed care because of cost in the past 12 months. About three of 10 New Yorkers (30%) and Californians (31%) reported having at least one cost-related access problem, compared with 43 percent of Floridians and Texans (Exhibit 2).14 These differences remain statistically significant even after taking into account the states’ demographic profiles. 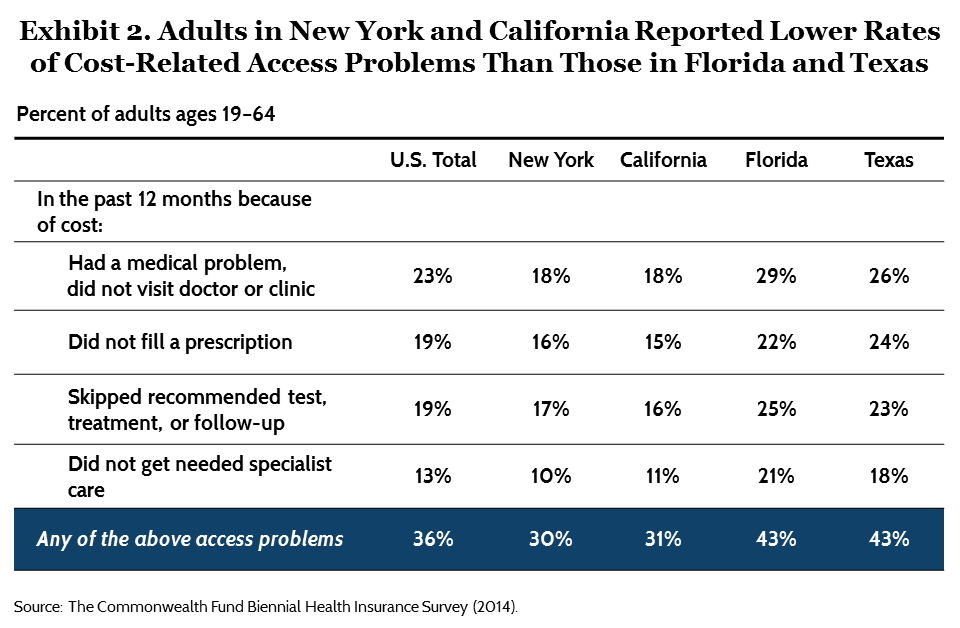 There was variation between states in all four cost-related areas asked about in the survey. In New York and California, 18 percent of residents reported having a medical problem but not going to a doctor or clinic because of cost, versus 29 percent in Florida and 26 percent in Texas. Residents in New York and California reported not getting needed specialist care at about half the rate as people in Florida and Texas.

There are likely a range of factors contributing to this variation, with insurance coverage playing a large role. Across the U.S., insured adults have historically reported cost-related access problems at much lower rates than uninsured adults.15 To some degree, California and New York’s higher rates of coverage likely translate into lower rates of reported problems. But the quality of health insurance coverage—particularly, how much people have to pay out-of-pocket relative to their income—also makes a difference. Insured adults in New York (27%) and California (28%) reported lower rates of problems getting needed care in the past 12 months than did insured adults in Texas (36%) and Florida (39%) (data not shown). These differences persisted across the income distribution. One factor may be deductibles and other cost-sharing aspects of people’s insurance policies. Research has shown that people with high deductibles relative to their income are much more likely to report not getting needed care because of cost than those with lower deductibles.16 The survey found that a smaller share of insured Californians and New Yorkers (9 percent and 7 percent, respectively) had deductibles that were 5 percent or more of their income compared with Texans (18%) and Floridians (17%) (data not shown). Moreover, a recent analysis of federal data found that more people have health plans with deductibles in Florida and Texas: in 2013, 62 percent of employees with single-person insurance plans in New York and California had a deductible, compared with 84 percent in Florida and 90 percent in Texas.17

There were notable state variations in the percentage of adults reporting medically related financial difficulties in 2014. Fewer adults in New York and California said they had problems paying their medical bills in the past 12 months, or were paying off medical debt, than did adults in Florida and Texas (Exhibit 3). Twenty-nine percent of New Yorkers and 24 percent of Californians said that, in the past 12 months, they had a problem or were unable to pay their medical bills, had been contacted by a collection agency for unpaid medical bills, had to change their way of life to pay medical bills, or were paying off medical bills over time. Rates were much higher in Florida and Texas: more than two of five adults in each state reported at least one of these problems.25 These differences remained after taking into account variations in the demographic compositions of the states’ populations. As with the cost-related access problems, states’ decisions that enhanced access to affordable health insurance coverage both before and after the Affordable Care Act as well as insurance design and cost-sharing likely contribute to differences. 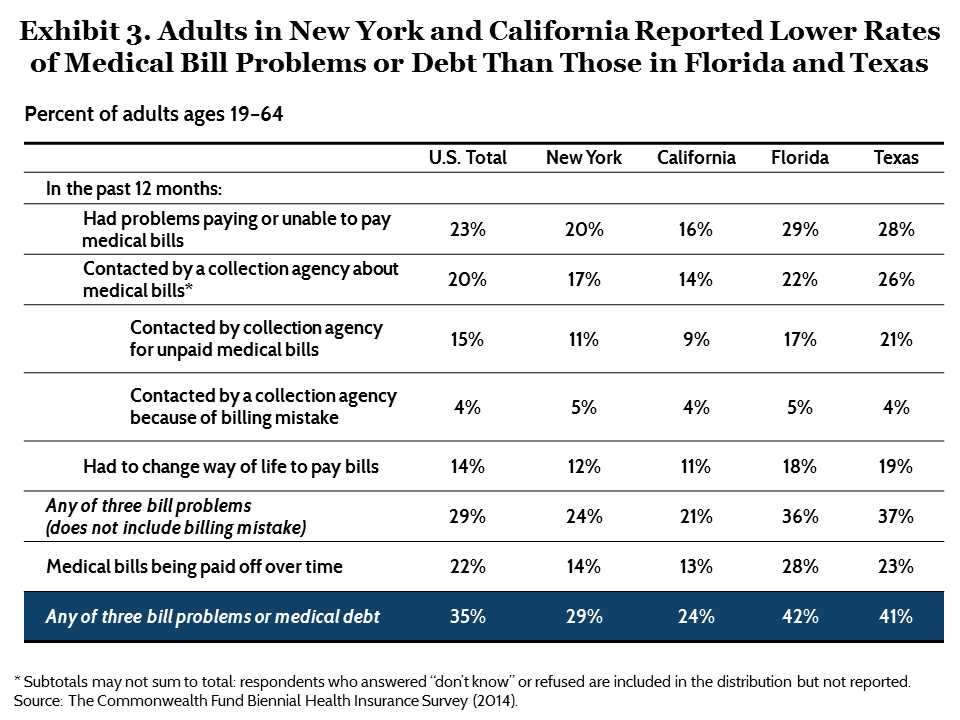 The analysis suggests that the health policy decisions made by state leaders matter. Of the four states studied, New York has had the longest history of legislation aimed at enhancing the availability of affordable coverage. California also implemented an early expansion of Medicaid eligibility and, based on federal survey data, both states began achieving declines in their adult uninsured rate earlier than other states.26 Both have taken advantage of opportunities granted by the Affordable Care Act to further expand the reach of coverage and access. Alternatively, Florida and Texas, while experiencing robust enrollment in private plans through the federal health insurance marketplace, have not expanded Medicaid eligibility and have made less headway in reducing their uninsured populations.

While there have been significant declines in the number and share of uninsured adults since the major provisions of the Affordable Care Act went into effect in 2014, coverage gaps are leaving millions uninsured and without access to affordable coverage. An estimated 3.7 million people have fallen into the Medicaid coverage gap in states that have not yet expanded eligibility for Medicaid.27

In addition, the law does not provide access to any new coverage options for unauthorized immigrants. They are ineligible for Medicaid coverage and cannot purchase private plans through the marketplace, either subsidized or unsubsidized. The Congressional Budget Office estimates that by 2020, 30 percent of the remaining uninsured will be unauthorized immigrants, or about 9 million people.28 Another part of the law that is leaving people uninsured is the so-called “family coverage glitch,” which defines affordability—and eligibility for subsidies—based on the cost of individual, rather than family, coverage. Currently, an estimated 2 million to 4 million people are uninsured because of this issue.29

The analysis also indicates that expanded coverage is necessary to improve access to care and reduce medical financial burdens among U.S. families. But the quality and comprehensiveness of coverage across all sources of insurance (marketplace plans, individual plans, employer-provided coverage, and Medicaid), will ultimately determine the degree to which these problems are lessened for U.S. families.