One-quarter of privately insured working-age adults have high health care cost burdens relative to their incomes in 2015, according to the Commonwealth Fund Health Care Affordability Index, a comprehensive measure of consumer health care costs. This figure, which is based on a nationally representative sample of people with private insurance who are mainly covered by employer plans, is statistically unchanged from 2014. When looking specifically at adults with low incomes, more than half have high cost burdens. In addition, when privately insured adults were asked how they rated their affordability, greater shares reported their premiums and deductible costs were difficult or impossible to afford than the Index would suggest. Health plan deductibles and copayments had negative effects on many people’s willingness to get needed health care or fill prescriptions. In addition, many consumers are confused about which services are free to them and which count toward their deductible.

More Americans than ever before have private health insurance, in large part because of the coverage expansions of the Affordable Care Act (ACA), now in their third year.1 At the same time, as more people than ever are gaining coverage, many of those enrolled in private plans, including employer-based and ACA marketplace plans, have high deductibles and other forms of cost-sharing. These elements can place a great financial burden on individuals and families, especially those with low or moderate incomes.2

This issue brief draws from the second installment of the Commonwealth Fund Health Care Affordability Tracking Survey to measure the extent to which U.S. adults have high health care cost burdens.3 We created what we call the Commonwealth Fund Health Care Affordability Index, a composite measure that assesses the share of U.S. adults who have high premium costs, high deductibles, and/or high out-of-pocket health care costs relative to their incomes (see graphic below). In addition, we asked adults about how they perceive the affordability of their premiums, deductibles, and copayments or coinsurance. Adults also told us how their deductibles and copayments affected their health care decisions in the past year.

The data reflect the health insurance and health care expenditures reported by adults who were insured continuously all year with private insurance through an employer, the Affordable Care Act’s marketplaces, or the individual market.4 The majority of the survey sample has employer coverage (90%), but the sample also includes people in marketplace plans (6%) and with individual coverage (5%). In the survey, 61 percent of U.S. adults had been insured continuously with private coverage for the prior 12 months, up from 56 percent one year earlier (data not shown).

How Many Privately Insured Adults Have Unaffordable Health Care Costs?

How Do Consumers Rate the Affordability of Their Premiums, Deductibles, and Copayments?

We asked adults for their thoughts on how affordable their health insurance costs and cost-sharing responsibilities are. Our measures of affordability for premiums and deductibles diverged from consumers’ views. According to our Affordability Index, 13 percent of privately insured adults had unaffordable premiums (Exhibit 1). However, one-quarter of privately insured adults said their premiums were difficult or impossible to afford (Exhibit 3). Adults with low and moderate incomes were more likely to report that their premiums were difficult to afford than higher-income adults. 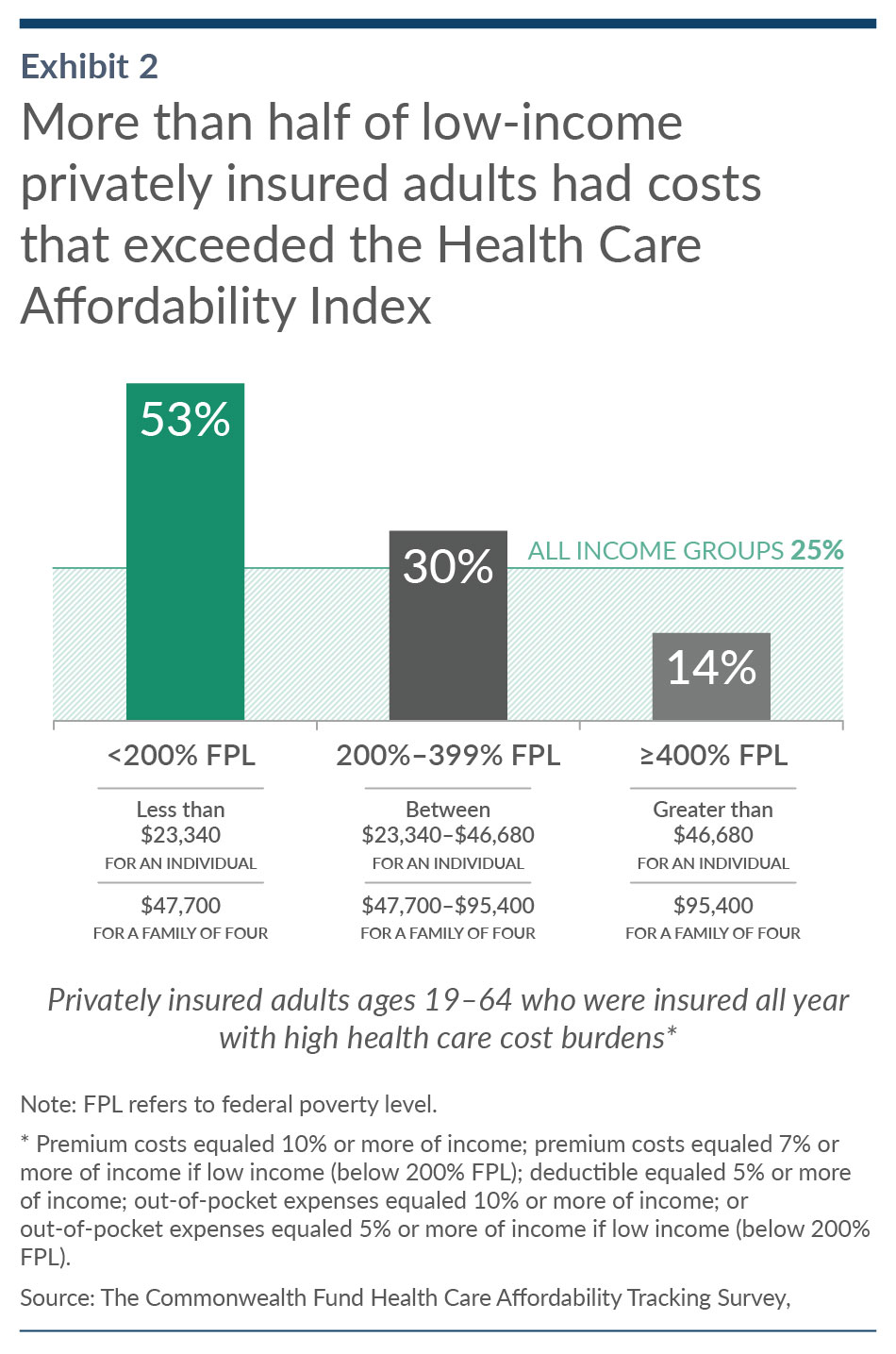 People had fewer problems affording copayments and coinsurance when they visited a doctor or filled a prescription (Exhibit 5). However, the lowest-income adults reported struggling with these costs. One-third (34%) of adults with incomes under 200 percent of poverty said it had been difficult or impossible to afford their copayments or coinsurance when they had gone to the doctor or filled a prescription in the past year. 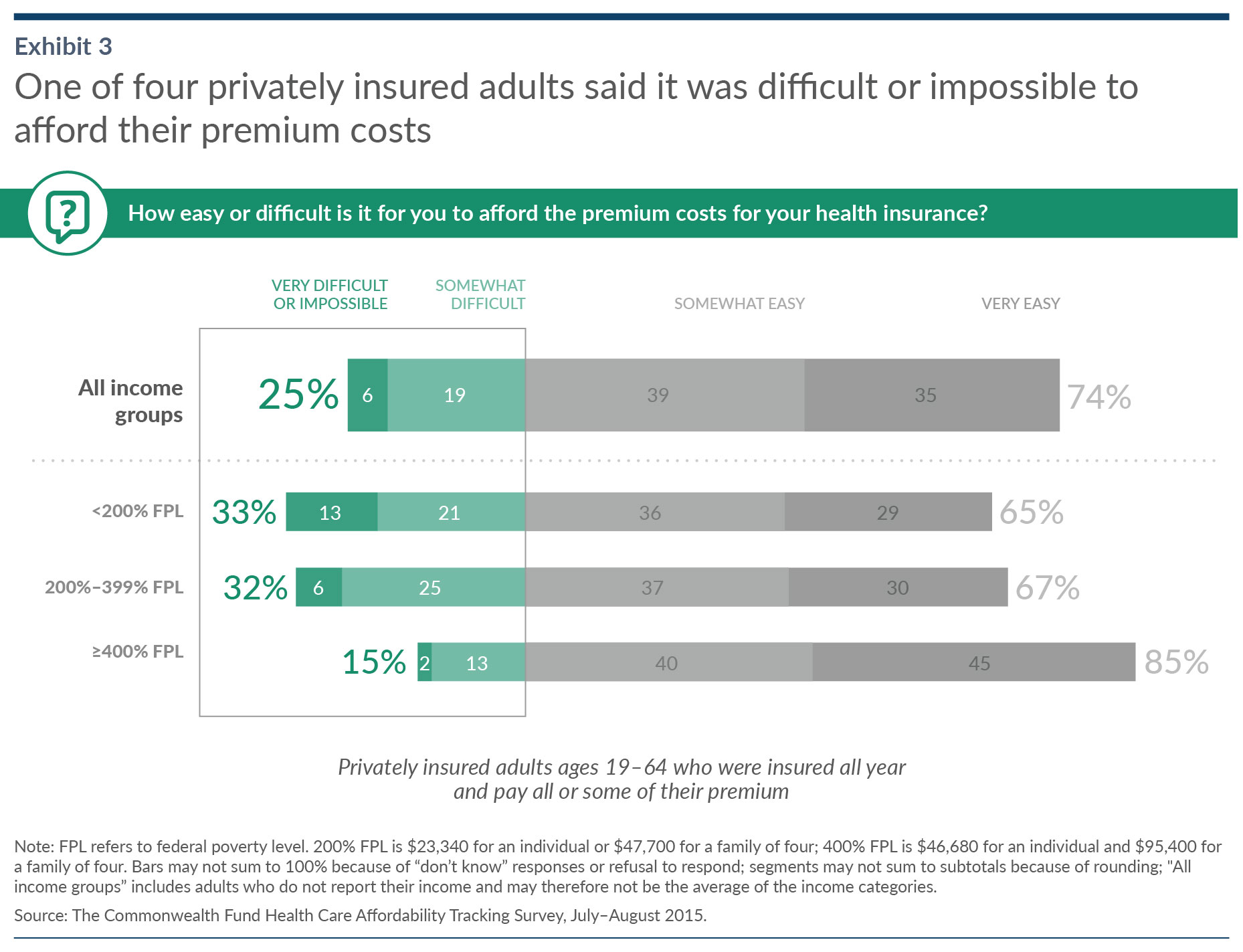 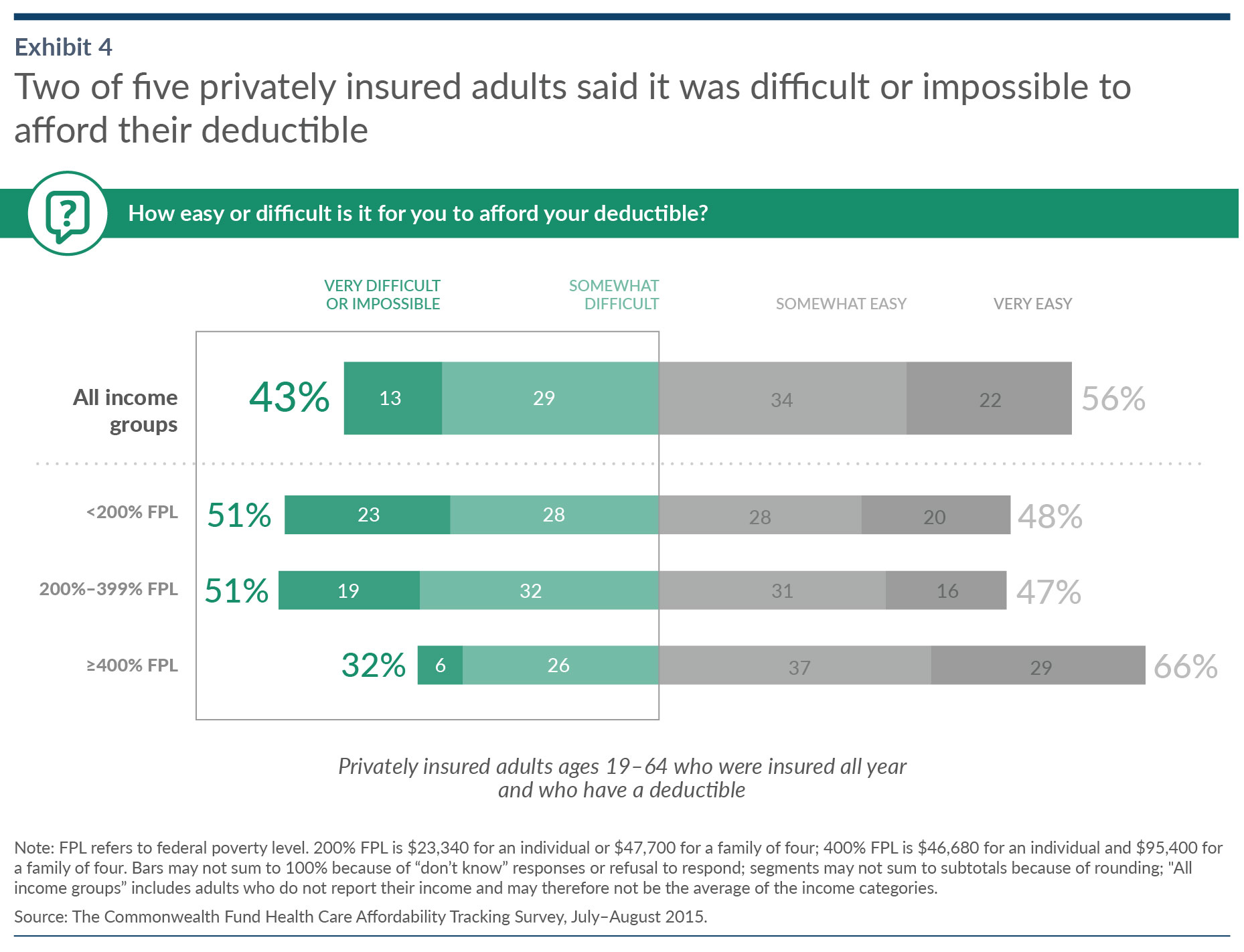 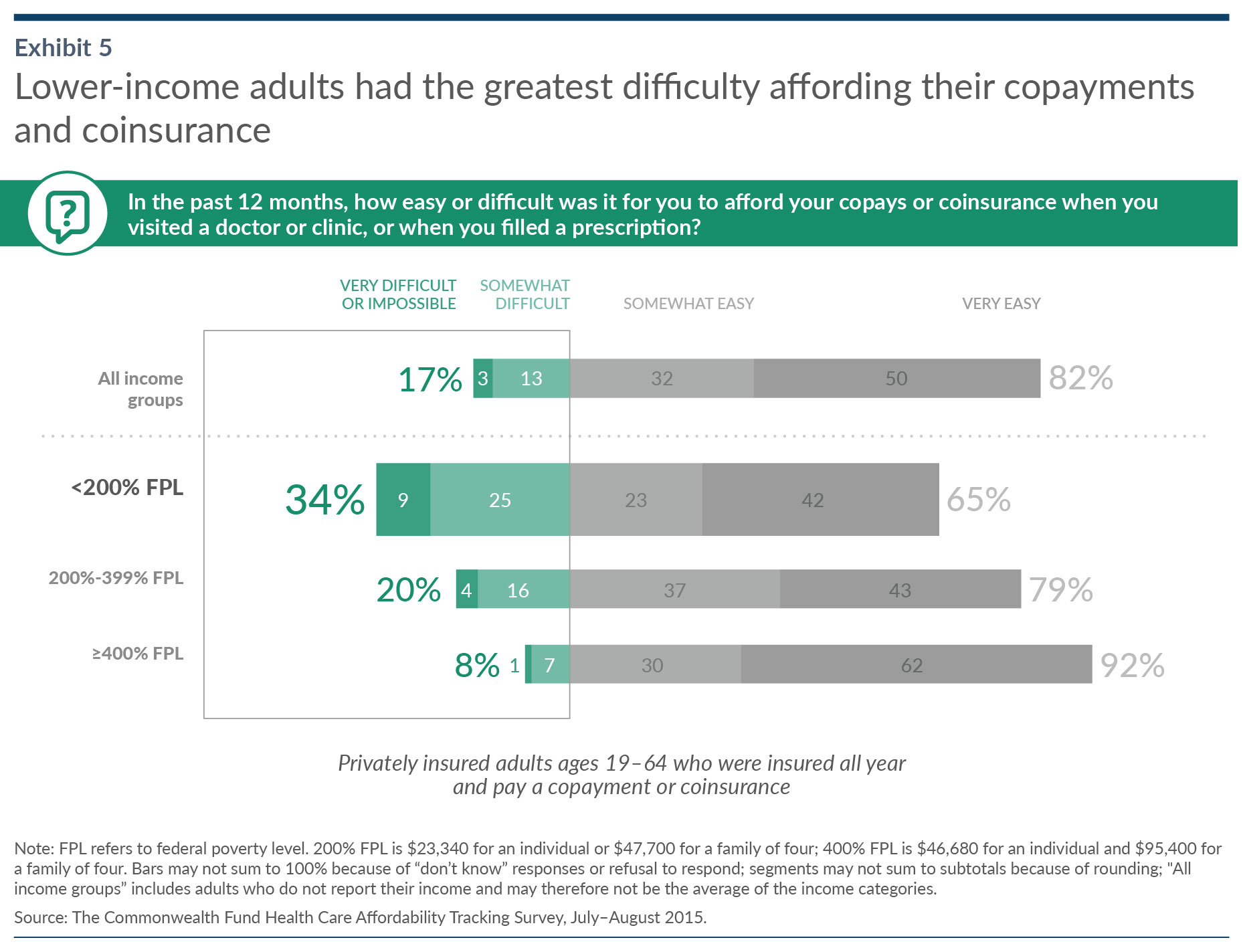 How Do Deductibles and Copayments Affect People’s Health Care Decisions?

Employers and insurers have made the argument that deductibles and copayments in health plans create disincentives for consumers to overuse health care or use services that might be of limited value. The survey finds evidence that cost-sharing also creates disincentives for people to get necessary care, like going to the doctor when they are sick or filling prescriptions for their medications. These findings are consistent with past research conducted by The Commonwealth Fund.7

Many people with deductibles appeared to be confused about which services count toward that amount—that is, how much they need to pay in full before their insurance kicks in—and which services are paid outright by their insurance and therefore, free to them. Under the Affordable Care Act, all health plans, including employer plans, must provide free preventive care services, such as cancer and cholesterol screenings, regardless of whether an individual has met his or her deductible (see box below). But despite this protection, 18 percent of adults with high deductibles relative to their income and 10 percent of those with lower deductibles relative to their income said they did not get a preventive care test because of their deductible. 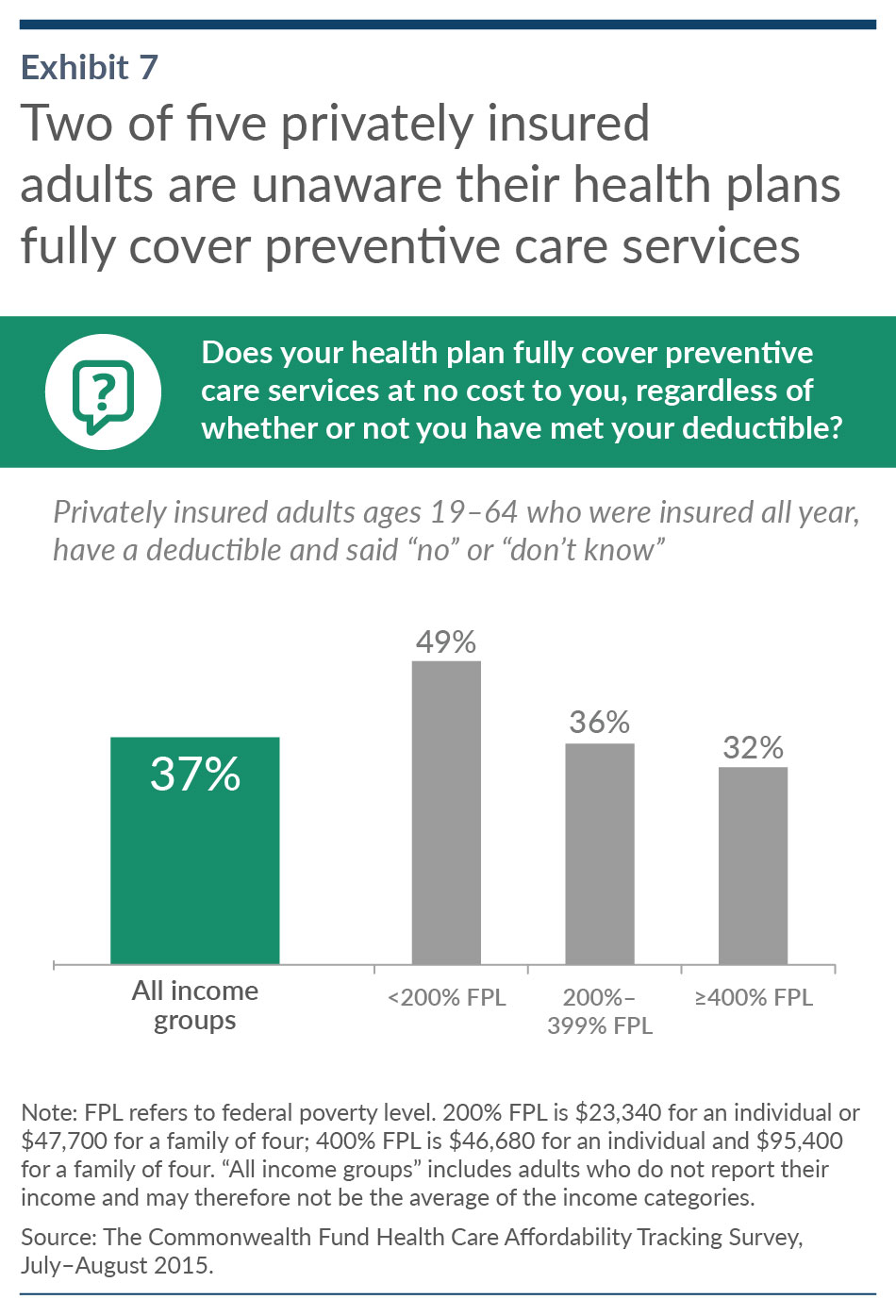 Effects of Copayments and Coinsurance on Health Care Decisions

Copayments and coinsurance also created disincentives for many people—especially those with low incomes—to get needed health care services. Two of five (39%) adults with incomes under 200 percent of poverty ($23,340 for an individual or $47,700 for a family of four) said that because of their copayments or coinsurance, they had either not filled a prescription, not gone to the doctor when they were sick, skipped a medical test or follow-up visit recommended by a doctor, or not seen a specialist when they or their doctor thought they needed one (Exhibit 8). One of five (19%) adults with relatively higher incomes also reported that their copayments were barriers to filling prescriptions or getting needed medical care.

The reality of a high deductible or copayment for a prescription drug can be a bracing experience for families when someone falls ill. But while the deductible is a known potential cost at the time of enrollment, there have been widespread anecdotal reports about people who have received surprise bills from providers that were assumed to be in network. For example, a patient may have surgery in an in-network hospital by an in-network surgeon, but receive a bill from an anesthesiologist who is outside the network. Providers outside a plan’s network may charge patients the difference between their allowed amount and what they charge. This is commonly known as “balance billing.”

We asked adults whether there had been a time over the past year when a provider charged anyone in their family more than the insurance would pay and then billed them for the difference. Three of 10 (29%) respondents reported they had experienced this (Exhibit 9). We then asked these adults why they believed this had happened: 36 percent said it was because they had not yet met their deductible and 26 percent said it was because the provider was not within their network. 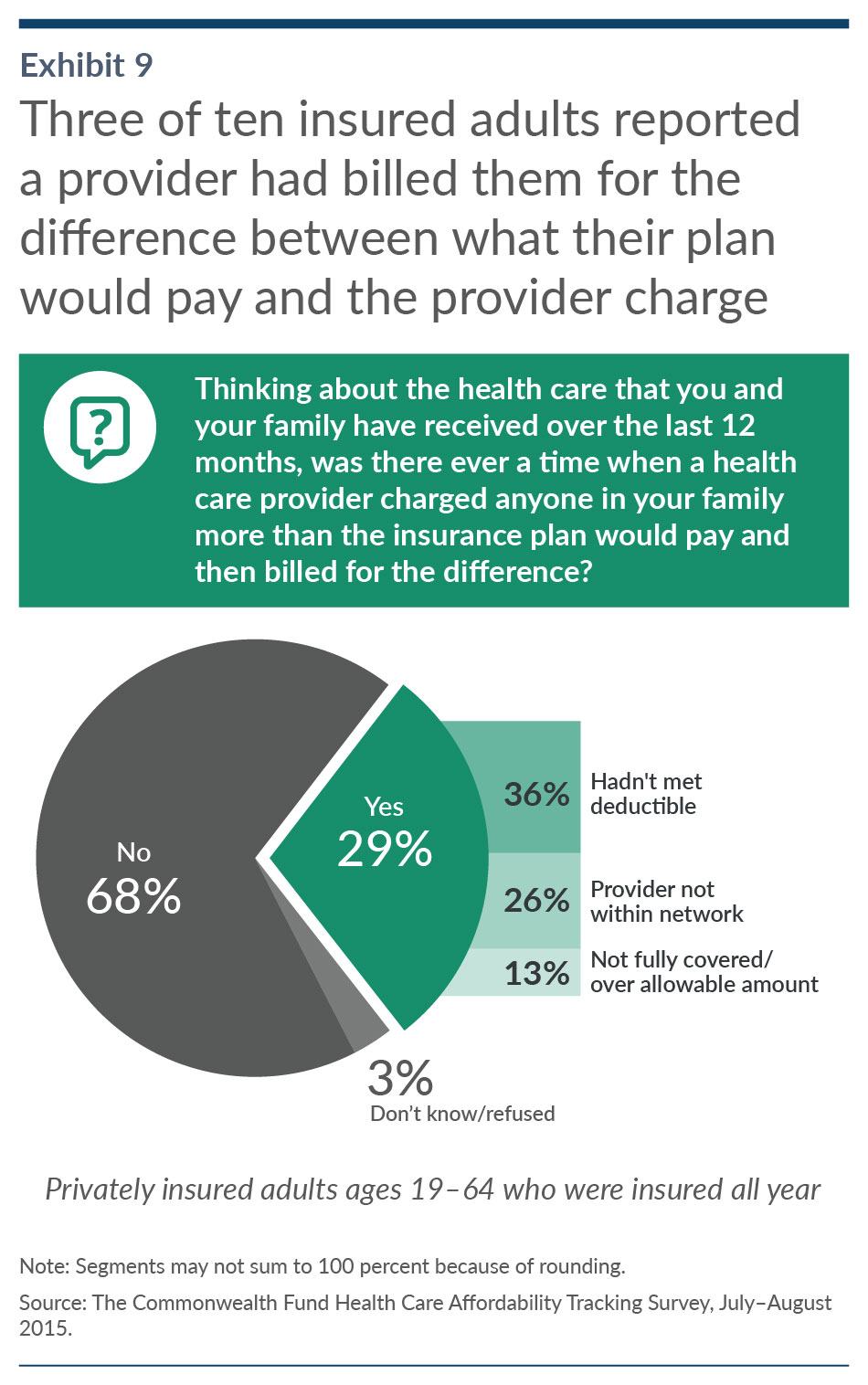 The Commonwealth Fund Health Care Affordability Index indicates that one-quarter of Americans with private health insurance had premiums, deductibles, and/or out-of-pocket costs that were unaffordable in 2014 and 2015. But a larger portion of adults viewed key components of the Index—premiums and deductibles—as more difficult to afford than the Index would suggest.

Ultimately, consumers’ perceptions of cost and their understanding of their health plans are what matter most. If people believe that their deductibles or copayments are unaffordable, it will affect the way they make health care decisions. Two of five adults who had high deductibles according to our Index reported not getting needed care because of their deductible, including not going to the doctor when they were sick or delaying or not getting a follow-up test recommended by a physician. But one of five adults with deductibles that were considered “affordable” according to the Index also said they delayed needed care because of their deductible. In addition, some people seemed to be unclear about which services were free to them and which were subject to meeting a deductible limit.

Our measure of premium affordability is based roughly on the definitions of premium affordability for marketplace and employer plans under the ACA. But it is a conservative measure. For example, the Index would not identify someone with a low income as having an unaffordable premium if he or she was spending less than 7 percent of income on an employer premium, but more than they would spend if they were enrolled in a subsidized marketplace plan or Medicaid.

Perceptions of premium affordability also affect consumer behavior. A recent Commonwealth Fund survey found that 47 percent of adults in marketplace plans viewed their premiums as difficult to afford.11 In addition, 57 percent of people who visited the marketplaces in the last open enrollment period but failed to sign up said they could not find an affordable health plan.12 Among those who didn’t get coverage elsewhere, more than half had incomes that made them eligible for premium subsidies. Some people may not realize that they are eligible for subsidies or understand the actual costs of marketplace plans once subsidies are factored in. Others may simply view their premiums as unaffordable to them, despite what the law considers “affordable” in theory.

In the current open enrollment period, the federal and state governments are aiming to simplify the marketplace shopping experience to help consumers better understand their choices. In addition, if more states choose to expand their Medicaid programs, there will be more affordable choices for many low-income people, including those who currently have employer coverage. But ultimately, to reach the goal of allowing all Americans to have access to affordable health insurance and health care, policymakers must listen carefully to what consumers are telling them about their costs.

1 According to the federal National Health Interview Survey, from January to June of 2015 the share of working age adults with private health insurance climbed to 70.6 percent, up from 64.2 percent in 2013, just prior to the major coverage expansions. The share of nonelderly adults with coverage through either Medicaid or Medicare rose from 16.7 percent to 18.2 percent. M. E. Martinez and R. A. Cohen, Health Insurance Coverage: Early Release of Estimates from the National Health Interview Survey, January–June 2015 (Washington, D.C.: U.S. Department of Health and Human Services, Centers for Disease Control and Prevention, National Center for Health Statistics, Nov. 2015).

12 S. R. Collins, M. Gunja, M. M. Doty, and S. Beutel, To Enroll or Not to Enroll? Why Many Americans Have Gained Insurance Under the Affordable Care Act While Others Have Not (New York: The Commonwealth Fund, Sept. 2015).

Table 2. Demographics of Privately Insured Adults Who Were Insured All Year, 2014 and 2015