A Long Way in a Short Time: States’ Progress on Health Care Coverage and Access, 2013–2015

In 2013, the year before the implementation of the Affordable Care Act’s (ACA) major coverage expansions, 17 percent of the U.S. population under age 65, about 45 million people, lacked health insurance (Appendix Table 1).1 By the end of 2015, two years after implementation, the uninsured rate had declined to 11 percent, according to data recently released by the U.S. Census Bureau. In those two years, the ACA’s major health insurance reforms caused the states’ uninsured rates to shift dramatically, resulting in a new coverage map of the country (Exhibit 1).

We examine this shift by comparing states’ performance between 2013 and 2015 on five indicators of health care access (Exhibit 2).2 Additionally, we examine the share of all individuals under age 65 with high out-of-pocket costs relative to their income.

These measures align with those reported in The Commonwealth Fund’s ongoing series of Health System Performance Scorecards. Launched a decade ago, the scorecards help policymakers, health system leaders, and the public track progress and set targets for improvement. It seems especially important now, as a new administration and Congress prepare to take office and the ACA faces an uncertain future, to take stock of the changes in coverage and access that have taken place across states, as well as the challenges that remain.

Uninsured Rates Among Adults Decline in Every State

Uninsured rates for adults ages 19 to 64 declined in all states from 2013 to 2015, and by 3 percentage points or more in 48 states and the District of Columbia (Exhibit 3, Appendix Table 1). Nearly all states experienced two consecutive years of decline in their adult uninsured rate. The only exceptions were Massachusetts, which had the lowest uninsured rate of any state to begin with, and South Dakota.

The greatest cumulative gains came in states that had expanded eligibility for their Medicaid programs as soon as federal resources became available in January 2014. Nine such states experienced 10 to 13 percentage-point reductions in their adult uninsured rate from 2013 to 2015. Six of these states—California, Kentucky, Oregon, Rhode Island, Washington, and West Virginia—sliced their uninsured rates by at least half over the two years. Some states that did not expand Medicaid as of the beginning of 2015 had declines of as much as 7 to 9 percentage points, including Florida, Georgia, Louisiana, Montana, North Carolina, South Carolina, and Texas.3 The ACA’s premium subsidies and insurance marketplaces were available in every state, leading to the decline in uninsured rates in states without the Medicaid expansion.

In the United States, people with low incomes have been at greatest risk for being uninsured.4 In 2013, nearly two of five adults (38%) with incomes below 200 percent of the federal poverty level ($22,980) lacked health insurance. By 2015, this rate had dropped to 25 percent. Between 2013 and 2015, the uninsured rate for low-income adults declined in every state, led by Kentucky with a 25 percentage-point reduction, closely followed by California, Oregon, Rhode Island, Washington, and West Virginia, which all had 20-to-23 percentage-point declines (Exhibit 4 [see slider above], Appendix Table 2).

Even before the ACA’s coverage expansions took effect, uninsured rates for children were much lower than the rates for working-age adults because of federal and state actions to expand public health insurance programs for children, including the Children’s Health Insurance Program (CHIP) and expanded eligibility under Medicaid.5

Still, between 2013 and 2015, the share of children uninsured dropped by at least 2 percentage points in 28 states (Exhibit 5 [see slider above], Appendix Table 1).6 As with adults, coverage gains among children reflect the ACA’s expanded coverage options and the “welcome mat effect,” in which people who were previously eligible but not enrolled for Medicaid or CHIP signed up, as a result of increased outreach efforts and awareness of insurance coverage.7

One of the central aims of the ACA’s insurance expansions is to enable people to get timely access to health care. Between 2013 and 2015, the share of adults age 18 and older who reported that they had not gone to the doctor when needed because of costs dropped by at least 2 percentage points in 38 states and D.C. (Exhibit 6 [see slider above], Appendix Table 1).8

Looking only at states’ low-income adult populations over the two-year period, there was at least a 2-percentage-point decline in the share of people who went without care because of costs in 37 states, including double-digit declines (10 to 14 points) in Kentucky, New Hampshire, Oregon, Washington, and West Virginia. These states all expanded Medicaid by January 2015 (Appendix Table 2).

Better Access to Care for At-Risk Adults Across the Country

We also assessed access to routine care for “at-risk” adults—that is, those who could be at greater risk for adverse health outcomes if they do not receive care. This at-risk group includes everyone age 50 or older, since this age group needs recommended preventive care and many have chronic conditions. It also includes adults ages 18 to 49 who report having chronic illnesses or being in poor or fair health.

Between 2013 and 2015, a third of states (16 states and D.C.), representing all regions of the country, experienced at least a 2 percentage-point drop in the share of at-risk adults who had not visited a doctor for a routine check-up in at least two years (Appendix Table 1). The largest declines (4 percentage points) were seen in Kentucky, Oklahoma, and Rhode Island. Three states (Louisiana, Nevada, and Tennessee) experienced a worsening of 2 to 3 percentage points in this rate over the two-year period.

In contrast to our other measures, access to dental care for adults age 18 and older between 2012 and 2014 (the most recent years for which data were available) showed little progress. In the United States, dental care is traditionally covered under a separate policy than medical care. ACA marketplace plans are not required to provide dental coverage for adults, and state Medicaid and CHIP programs can choose whether to extend dental benefits to adults. Most state Medicaid programs currently do provide at least some dental benefits for adults, but their comprehensiveness varies widely by state, and because these benefits are optional, they often rise and fall on the fortunes of state budgets.9

In 2014, in all states, at least one of nine adults age 18 and older (11%) had gone a year or more without a dental visit. In the worst-performing states on this indicator (Louisiana, Mississippi, Texas, and West Virginia), one of five (20%) went without a visit. Both the lowest and highest state rates and the U.S. average (16%) in 2014 were essentially unchanged from 2012 (Appendix Table 1).

People without health insurance receive significantly less health care than people with insurance do.10 When they do get health care, uninsured people and their families face the full amount of their medical bills.11 But the growing proliferation of deductibles in both employer plans and in plans that people buy on their own is leaving many insured people also increasingly exposed to costs.12 We examined the share of individuals under age 65, both uninsured and insured, who lived in households that spent a high portion of annual household income on medical care. We used two thresholds to identify such individuals: people living in households that spent 10 percent or more of their income on health care; or 5 percent or more, if their annual income was below 200 percent of the federal poverty level.

During 2014–2015, 10 percent to 19 percent of people under age 65 lived in households where out-of-pocket spending on medical care was high relative to annual income (Appendix Table 1).13 A regional pattern is discernable. States with the lowest shares (10% to 11%) of people under age 65 with high out-of-pocket spending were in the Northeast and mid-Atlantic region (including Connecticut, Delaware, District of Columbia, Maryland, Massachusetts, New York, Rhode Island, and Vermont)—the one exception was Minnesota. States with the largest share of people with high out-of-pocket costs (18% to 19%) were in the South and West. These states included Arkansas, Idaho, Louisiana, Mississippi, Montana, Oklahoma, and Tennessee. These states also have higher rates of uninsurance and lower median incomes.

Looking at the states’ rankings in terms of health care access and affordability, the states (including the District of Columbia) that were in the top quartile of the 2015 scorecard were also in the top quartile in 2016, although there was some reordering within the quartile (Exhibit 7).14 In 2016, the top-ranked states were Vermont (first); Massachusetts (second); Minnesota and Rhode Island (tied for third); and Connecticut, Delaware, and the District of Columbia (all tied for fifth). The bottom-ranked states in 2016 were Arizona, Arkansas, and Idaho (all tied for 45th); Nevada (48th); Mississippi (49th); Oklahoma (50th); and Texas (51st). The states that had the most dramatic shifts in ranking between last year and this year were Kentucky, which moved from 28th to 18th place (tied with Illinois and Washington), and New Mexico, which moved from 46th to 37th (tied with Montana and Tennessee). 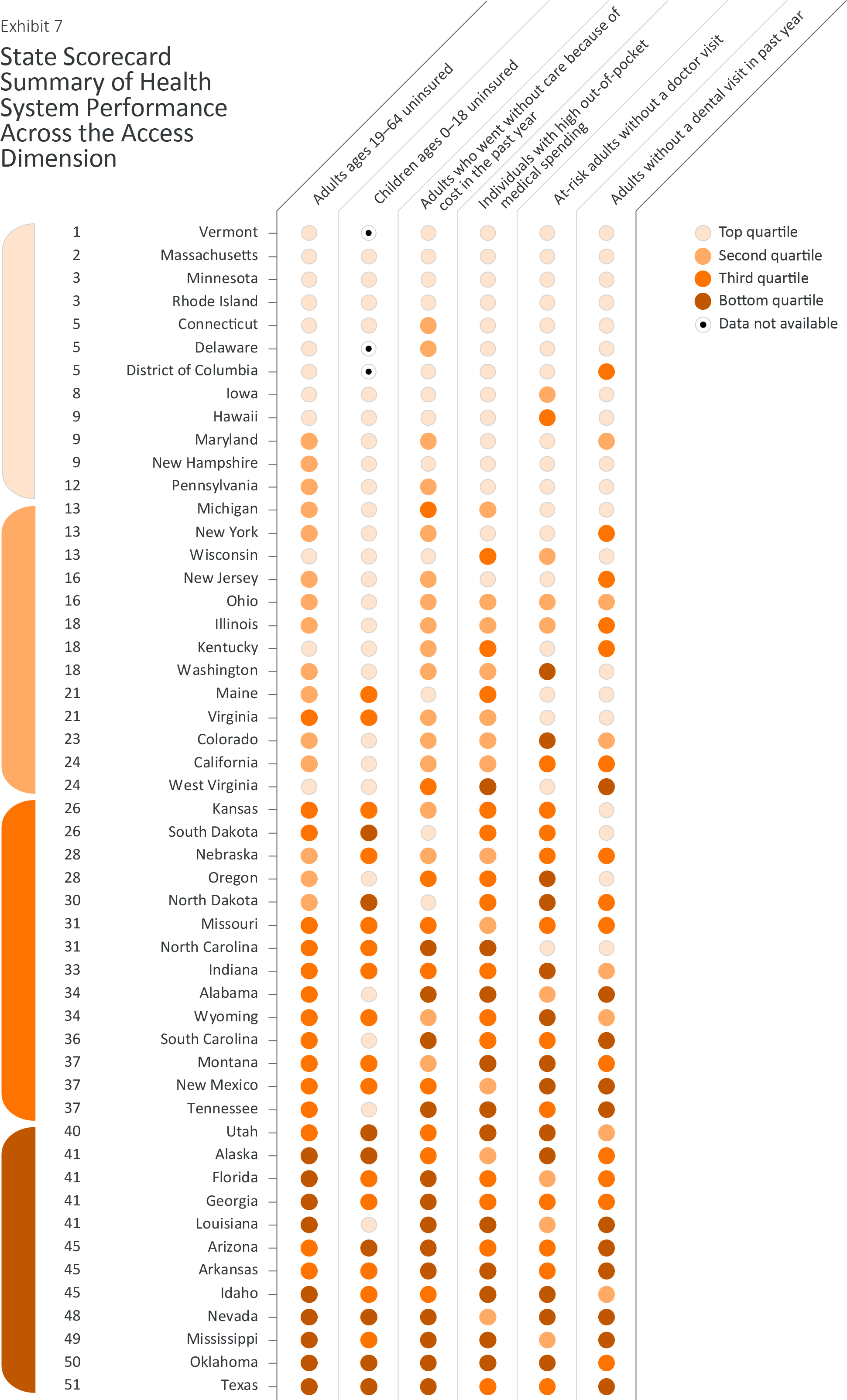 Several states in the bottom quartile showed the greatest improvement between 2013 and 2015 on some indicators. For example, Arizona, Arkansas, and Nevada were among the states with the largest percentage point declines in the uninsured rate for working-age adults (9 to 10 points each). Nevada, along with Florida, also had among the largest reductions in the share of uninsured children (6 and 5 percentage points, respectively). In addition, Arkansas, Florida, Georgia, and Louisiana were among only a dozen states that saw declines of at least 4 percentage points in the share of adults who went without care because of costs.

Six years after the passage of the Affordable Care Act in 2010, the United States is closer than it has ever been to achieving near-universal coverage, an essential component of a high-performing health system. More than 20 million Americans have gained coverage under the law, although variation in health care access and affordability across states remains.15 The historic decline in uninsured rates has been accompanied by widespread reductions in cost-related access problems and improvements in access to routine care for at-risk adults.

President-elect Trump and Republican leaders in the new Congress have proposed repealing and replacing the Affordable Care Act. The effect on the number of uninsured will depend on the replacement, but a straight repeal of the law would result in nearly 20 million people losing insurance by 2018, according to an analysis by researchers at RAND.16

These findings illustrate the impact that policy can have on coverage and access to care and offer a baseline for assessing future policy changes. Continued monitoring of state trends in health care coverage and access will be necessary to determine whether in the coming months and years the nation continues to make progress toward a high-performing health system.

Historically, uninsured rates within the working-age population have been much higher for black and Hispanic adults than for white adults. In 2013, almost one of four black adults ages 19 to 64 (24%) and two of five Hispanic adults (40%) did not have health insurance compared to 14 percent of white adults (Appendix Table 2). But uninsured rates for both minority groups declined significantly at the national level since the ACA’s coverage expansions took effect, dropping to 15 percent among black adults and to 28 percent among Hispanic adults in 2015 (see chart).

The six health care access and affordability indicators reported here align with those reported in The Commonwealth Fund’s ongoing series of Health System Performance Scorecards. For purposes of this analysis, we treat the District of Columbia as a state, unless otherwise indicated.

We considered an indicator’s value to have changed if it was at least one-half (0.5) of a standard deviation larger than the difference in rates across all states over the two years being compared.

We averaged state rankings for the six indicators to determine a state’s access and affordability dimension rank. More information on scorecard methodology and indicator descriptions and source notes can be found in Aiming Higher: Results from a Scorecard on State Health System Performance, 2015 Edition.