How Much U.S. Households with Employer Insurance Spend on Premiums and Out-of-Pocket Costs: A State-by-State Look

Compared to people in other states, a greater share of Louisiana, Maine, and Arkansas residents face large cost burdens due to high health insurance premiums

In the years since the Affordable Care Act (ACA) took effect, public debate over the cost and quality of insurance has focused primarily on health plans sold through the marketplaces established by the law. There has been less attention on the 158 million Americans who have employer-based coverage.1

Faced with rising premiums, U.S. employers are sharing more of their costs with their workers, particularly through higher deductibles, copayments, and coinsurance. Recent research indicates that employer plan premium contributions and out-of-pocket costs, like those for prescription drugs, are eating up an increasing portion of household budgets.2

In this brief, we use findings from the Current Population Survey (CPS), a federal survey of households, to report on the amounts that workers under age 65 and their dependents spent on premium contributions for their employer coverage and on out-of-pocket costs for health care. We also report on the percentage of people in each state who faced premium contributions or out-of-pocket expenses that were high relative to their income in 2016–2017 (see “Definitions” box).

This brief complements an earlier Commonwealth Fund state-level analysis of the size of employee premium contributions and deductibles reported by employers. The previous report looked at what workers were at risk of spending out of pocket to meet their deductibles when they used their insurance.3 This brief examines what workers report actually spending on care for themselves and their families.

This brief focuses on U.S. households in which all members are under age 65 and have employer coverage. 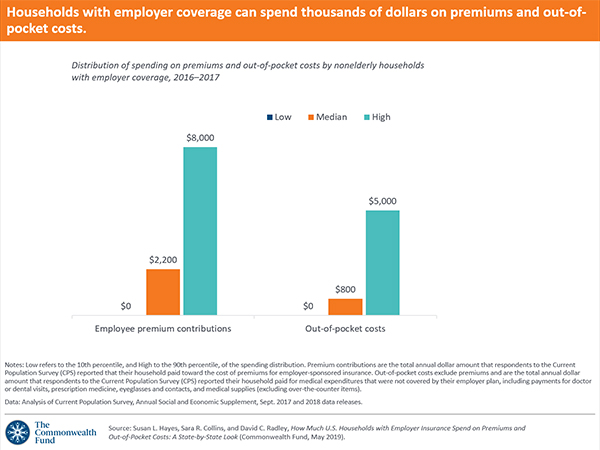 At the high end of the spending range, households spent $8,000 on premiums, nearly four times the median. Households with high premium contributions, however, may have plans that require little cost-sharing — like no deductible. But others have coverage with both high premiums and high deductibles.4

Some households reported spending nothing on medical care, but most households incurred at least some out-of-pocket costs, which in our analysis includes spending on payments for doctor or dental visits, prescriptions, eyeglasses and contacts, and medical supplies (excluding over-the-counter items). Median spending on out-of-pocket costs over the course of a year was $800, but at the high end, households spent $5,000 (Table 2).

While household size affects both premium contributions and out-of-pocket expenses, the health status of family members can cause out-of-pocket spending to vary dramatically from year to year, not only between households but within the same household. 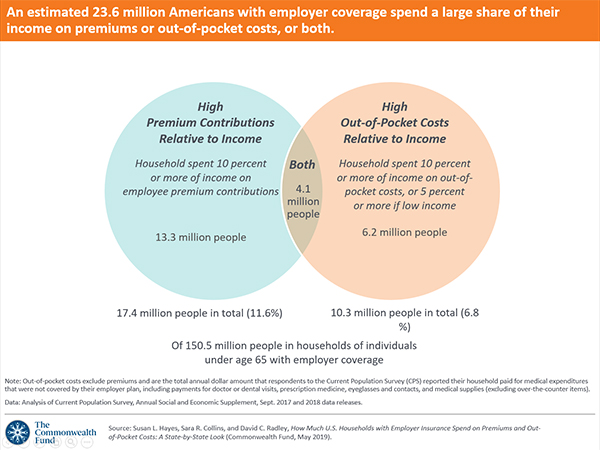 Premium contributions for job-based insurance, out-of-pocket health expenses — or both — place a weighty financial burden on an estimated 23.6 million Americans.

We find an estimated 17.4 million working-age adults and children — 11.6 percent of those living in nonelderly households with employer coverage — had high premium contributions relative to income. This means household spending on plan premiums equaled or exceeded 10 percent of income.

Aside from premiums, an estimated 10.3 million working-age adults and children — 6.8 percent of those in nonelderly households with employer coverage — had high out-of-pocket costs relative to income. Our study considered such spending to be high if it accounted for 10 percent or more of household income, or 5 percent or more for households below 200 percent of the federal poverty level (about $24,000 for a single person in 2016).5

Four million adults and children were counted in both groups. They lived in households that were saddled with high premium contributions and high health-related out-of-pocket expenses relative to income (Tables 3 and 4). 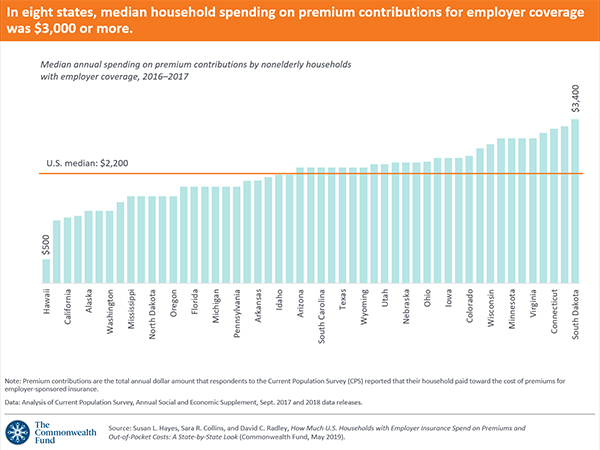 The median annual amount households with employer coverage spent on premiums alone varied widely across states, ranging from $500 in Hawaii to nearly seven times that — $3,400 — in South Dakota in 2016–2017 (Table 1). In eight states, the median amount spent was $3,000 or more. Five of the states with the highest median premium contributions were in New England, though three of these (Connecticut, Massachusetts, and New Hampshire) also had the highest median incomes of any state in the country.6 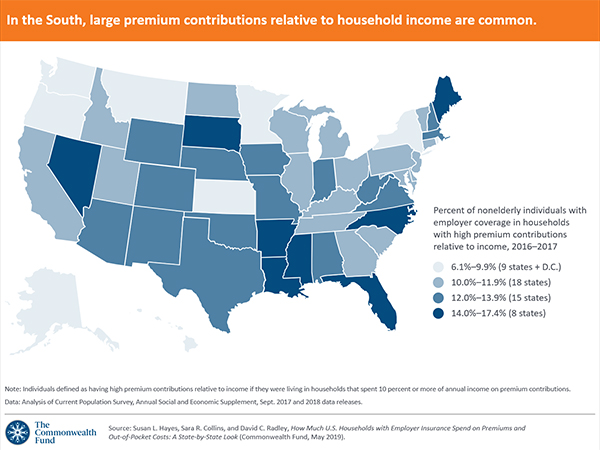 Across the U.S., the proportion of residents under age 65 with employer coverage who had high premiums relative to income ranged from 6.1 percent in the District of Columbia to 17.4 percent in Louisiana (Table 1). These households spent at least 10 percent of household income on premium contributions. 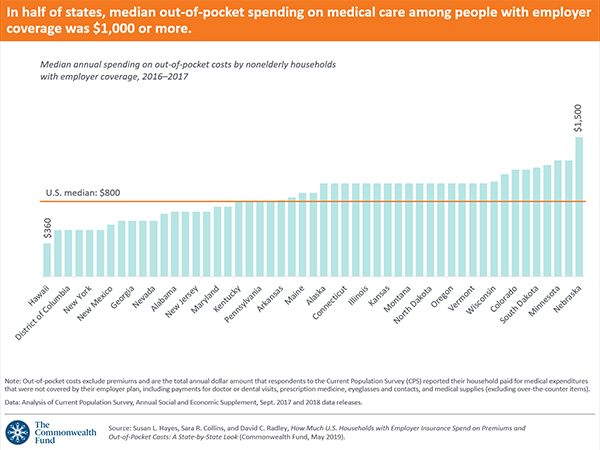 In four states, households in the top 10 percent of spending on out-of-pocket costs paid $7,000 or more (Table 2). 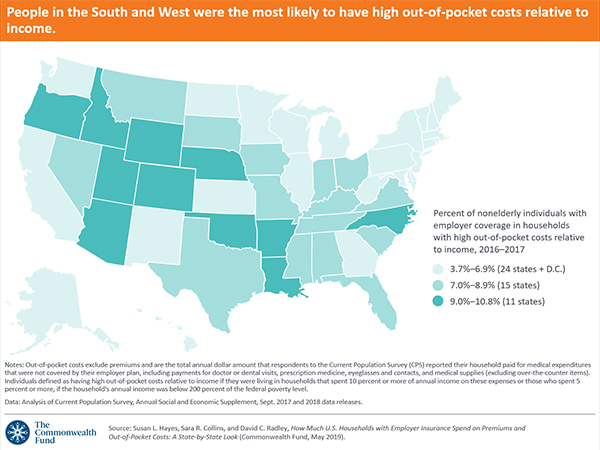 In eight states, about one in 10 people with employer coverage lived in households with high out-of-pocket expenses relative to income (Table 2).8 States in the South and West had the highest rates — 9 percent to nearly 11 percent. 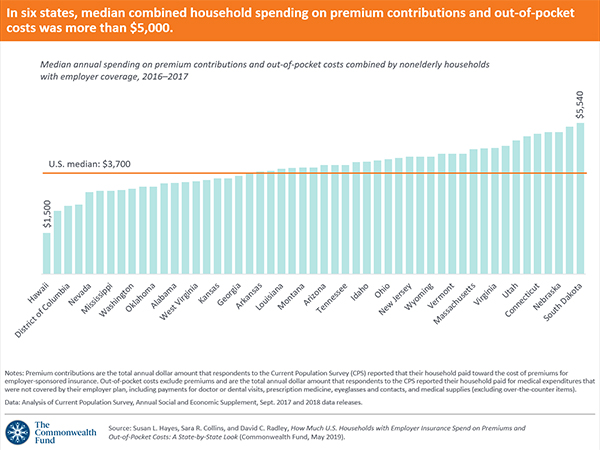 Generally, health plans with lower premiums tend to have higher deductibles and more cost-sharing, and vice versa. And some people just don’t use much health care during the year, regardless of how much they spend on premiums.

Many U.S. households with employer-based health coverage are burdened by high premium costs, high out-of-pocket expenses, or both.

There are several policy options that could reduce this increasing cost burden. To lower households’ premium contributions to employer plans, Congress could:

To improve the financial protectiveness of employer plans, Congress could:

If enacted, these policies could help reduce the health care cost burdens of millions of people with employer coverage. But they must be paired with systemwide efforts to rein in the cost of health care — the main driver of growth in private insurance premiums and the trend toward greater consumer cost-sharing.

There is growing evidence that the primary driver of per capita costs in private insurance are prices paid to providers.12 These prices vary across states and even within the same markets since they are the consequence of private negotiations between providers and insurers. Hospitals with more leverage in their markets are able to negotiate higher prices with insurers and employers. To arrest the growth in premiums and deductibles, more attention needs to be paid to what we pay hospitals and physicians.

This analysis uses data from the U.S. Census Bureau’s Current Population Survey (CPS), Annual Social and Economic Supplement, specifically the September 2017 and 2018 data releases reflecting health insurance costs in 2016 and 2017. Our estimates are based on an average of two years of survey data to ensure adequate sample size at the state level.

Based on these data, we estimated the dollar amount that households (including single-person households) comprising people under age 65 with employer coverage spent on premium contributions and, separately, on out-of-pocket costs.

We chose to report the median dollar amount spent rather than the average because in some states there were a very small number of households that had much higher spending than all the others. These outliers pull up the average, making spending on premiums and on out-of-pocket costs appear higher than it actually is for the typical household. The median, which is the midpoint of all the values, is not affected by these outliers, and therefore provides a better representation of what households in the middle of the range are spending. To be consistent, we report the median amount (as opposed to the average) spent at the national level as well. We also report the dollar amounts that represent the 10th and 90th percentiles of the spending distribution for premium contributions and out-of-pocket expenses in each state and at the national level. This helps illustrate the wide range in household spending for employer coverage that exists within states and across the country.

Annual household premium contributions were considered high relative to income if they totaled 10 percent or more of a household’s annual income.

COVID-19 and Affordability of Coverage and Care for Medicare Beneficiaries
September 22, 2020 | Issue Briefs