It is often assumed that high-cost health insurance plans—referred to by some as "Cadillac" plans—provide rich benefits to users. But in this study comparing high- and low-cost employer-based plans, researchers found that benefit design explains only a fraction of the variation in family coverage costs. Other factors, such as industry sector and geographic differences in the costs of delivering care, are more likely explanations for why some health plans charge higher premiums.

For several decades, many economists and policymakers have believed that the U.S. tax code—specifically the regulation that allows employers' contributions for health insurance premiums to be treated as nontaxable income for employees—has led to some Americans being "overinsured." Several attempts have been made over the years to amend the open-ended tax treatment of employer-based insurance, including proposals in the current health care reform debate. This study, supported by The Commonwealth Fund, analyzed plans over and under a hypothetical standard deduction of $6,675 for single coverage and $13,350 for family coverage.

The rationale for limiting the deductibility of employer contributions to health insurance assumes that high-cost plans come with rich and perhaps unnecessary benefits. This study found, however, that despite dramatic differences in family premiums for plans over and under the standard deduction, plan characteristics do not vary greatly. Actuarial value and plan type explain only a tiny part of premium variation between plans. The two factors that do play a significant role—industry and regional medical costs—are beyond a firm's control, and policy efforts should make adjustments accordingly. Limiting the deductibility of employee benefits, say the authors, may not produce the targeted results that some advocates have long expected. A simple cap on deductibility may "exacerbate rather than ameliorate current inequities," they conclude. 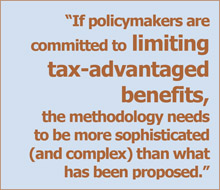 Using data from the 2007 Kaiser Family Foundation/Health Research and Educational Trust Employer Benefits Survey, the authors examined employer-based plans at 522 sample firms. The authors created a hypothetical standard deduction, based on a Bush administration proposal, of $6,675 for single coverage and $13,350 for family coverage, to sort and compare higher- and lower-cost coverage.

Benefit design and plan type explain only 6.1 percent of the variation in premiums between low- and high-cost plans. Industry type and regional medical costs also play a role, but the reasons behind most premium variation remain unknown.