Higher U.S. Branded Drug Prices and Spending Compared to Other Countries May Stem Partly from Quick Uptake of New Drugs

The United States spends much more per capita on prescription drugs than other developed nations do, and brand-name drug prices are considerably higher as well. Higher spending in the U.S. is driven primarily by faster uptake of new and expensive drugs. To control spending, U.S. policymakers could require strict evidence of the value of new drugs as part of price negotiations. 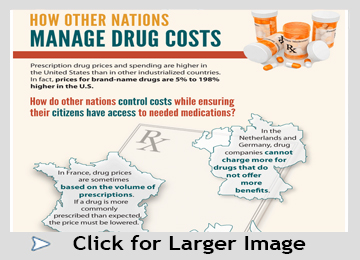 The U.S. spends substantially more per capita on prescription drugs than other members of the Organization for Economic Cooperation and Development (OECD). Commonwealth Fund–supported researchers examined variation in drug prices among selected OECD countries in three years (2005, 2007, and 2010) to determine which nations paid the highest prices for brand-name drugs, identify variations in per capita drug spending, and isolate the factors contributing to drug spending rate increases.

U.S. policymakers could consider requiring drug makers to provide more evidence about the value of new drugs relative to their cost, as other OECD nations do. Evidence of cost-effectiveness could be one of the criteria used in price negotiations or in determining which patients are likely to benefit from individual drug therapies. Other approaches, such as price-volume agreements (in which payers negotiate a discount for purchasing a set volume of drugs) and price modulation (which allows manufacturers to raise prices for some drugs—often the newer products—while lowering prices for others) could be used to control spending while encouraging uptake of innovative new therapies.

The study examined prices and spending for brand-name drugs in Australia, Canada, France, Germany, Switzerland, the United Kingdom, and the United States in 2005, 2007, and 2010, using the Intercontinental Medical Statistics Midas database. It focused on brand-name drugs that had the highest combined sales in 2010 and were available in all of the study countries—37 products in all. In addition to this core sample, the researchers examined prices and spending for seven new products in 2007 and eight new products in 2010, which enabled analysis of the effect of new product introduction and uptake. One limitation of this analysis is that it may not take into account negotiated price discounts in the U.S.

Faster uptake of new and more expensive prescription drugs in the United States, relative to the other OECD nations, contributes to higher per capita drug spending.