An evaluation of one of the nation’s largest “fee-for-value” initiatives demonstrates that physicians can control costs while improving their performance under a traditional fee-for-service arrangement. Primary care doctors who were offered financial incentives to form patient-centered medical homes and engage in quality improvement activities reduced spending by 1.1 percent on a per-member per-month basis compared with a control group. Performance on measures of preventive care and chronic disease management also improved. Spending increased initially, but declined by the program’s second year of participation.

Policymakers, health care providers, and payers are seeking ways to reduce growth in health care costs while improving the quality of care. One strategy, known as fee-for-value, involves adding incentive payments to fee-for-service reimbursement. Commonwealth Fund–supported researchers examined Blue Cross Blue Shield of Michigan’s Physician Group Incentive Program, which uses this approach for more than two-thirds of the state’s primary care doctors. Physicians in the program can earn higher office visit fees, among other incentives, if they employ core tools of the patient-centered medical home—such as registries to track patients and manage their care—and if they achieve certain cost and quality targets. The evaluation analyzed the program’s impact on quality and spending from 2008 to 2011 for more than 3 million beneficiaries in 11,000 physician practices.

They also observed significant improvement on four of the seven quality measures for diabetes care: screenings for HbA1c, low-density lipoprotein cholesterol, nephropathy, and the delivery of ACE inhibitors to patients with hypertension. 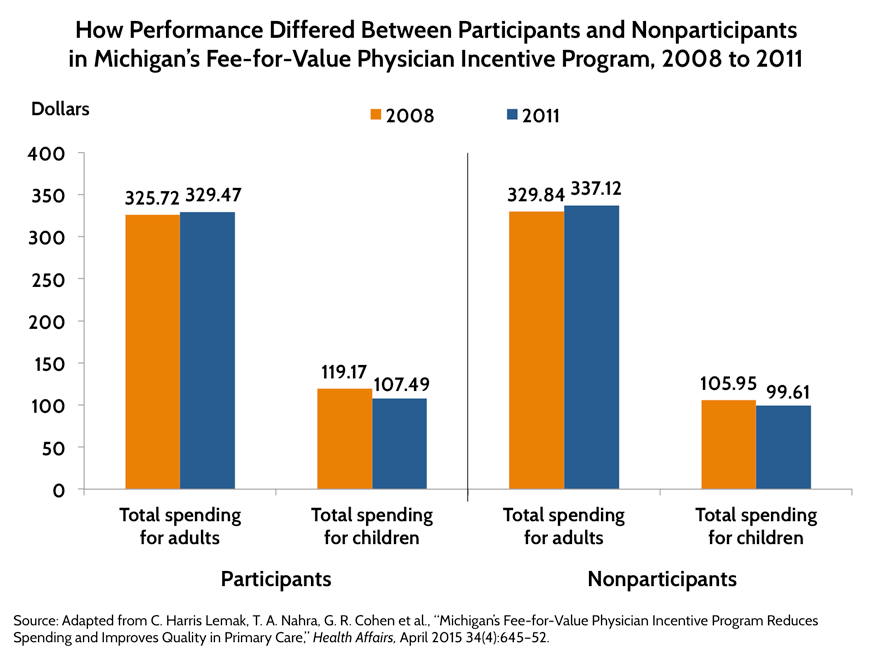 "It is possible to transform reimbursement within a fee-for-service framework to encourage and incentivize physicians to provide high-quality care, while also reducing costs."

Rewarding primary care physicians for improved performance on quality and cost metrics can lead to higher spending initially because of increased billing for preventive care and chronic disease management. While these additional services can produce downstream benefits by reducing the need for outpatient care, achieving similar reductions in hospital spending may take longer to achieve, at least with commercially insured populations that have younger, healthier members. Payers designing similar reward programs should consider this when setting expectations for reduced hospital use.

The study used Blue Cross Blue Shield of Michigan’s utilization and spending data collected between 2008 and 2011. To study the impact of the program over time, the authors compared the pre- and post-intervention performance of practices that participated in the Physician Group Incentive Program and those that did not. The program’s impact on quality was assessed between 2008 and 2010 and relied on Healthcare Effectiveness Data and Information Set (HEDIS) process measures for preventive and evidence-based care. The study population included more than 3.2 million people under age 65 and more than 11,000 physician practices.

Payers can contain costs and improve quality of care without disrupting the fee-for-service reimbursement model but should anticipate that spending may increase before it declines.