Almost three months have passed since Hurricane Maria devastated Puerto Rico, worsening long-standing economic and health challenges. As of December 14, more than a third of the territory’s 68 hospitals were still without electricity, and some community health centers were operating without regular power and clean water.

Although the storm’s official death toll is 62, researchers found that 1,085 deaths in September and October are likely linked to the hurricane. The island is scrambling to recover from the short-term effects of the hurricane: around a third of the territory still faced a power outage, 5 percent still didn't have drinking water, and 633 people were living in shelters as of December 14, according to official estimates.

Hurricane Maria has exacerbated existing fault lines in the territory’s health system, because before the storm, Americans in Puerto Rico had access to care that is equivalent to some of the worst on the mainland.1 Comparing Puerto Rico to Mississippi, the poorest state and the one that consistently ranks last on The Commonwealth Fund’s state health system scorecards, reveals some of the island’s challenges.

Approximately 6 percent of people on the island lack coverage, compared with 12.7 percent in Mississippi and 9.4 percent across the nation. But coverage alone does not guarantee that Puerto Ricans receive the health care they need and, indeed, fewer Puerto Rican adults receive recommended cancer screenings, vaccines, and immunizations than counterparts on the mainland. Puerto Ricans are more likely to report greater health needs, with 34 percent reporting “fair or poor” general health, as opposed to 23 percent of adults in Mississippi and 18 percent on average nationally.

Puerto Rico is much poorer than any American state, and relies more on public programs like community health centers, Medicaid, and Medicare. But because it is a territory, it gets less money and resources from the federal government to fund these programs than it would if it were a state. 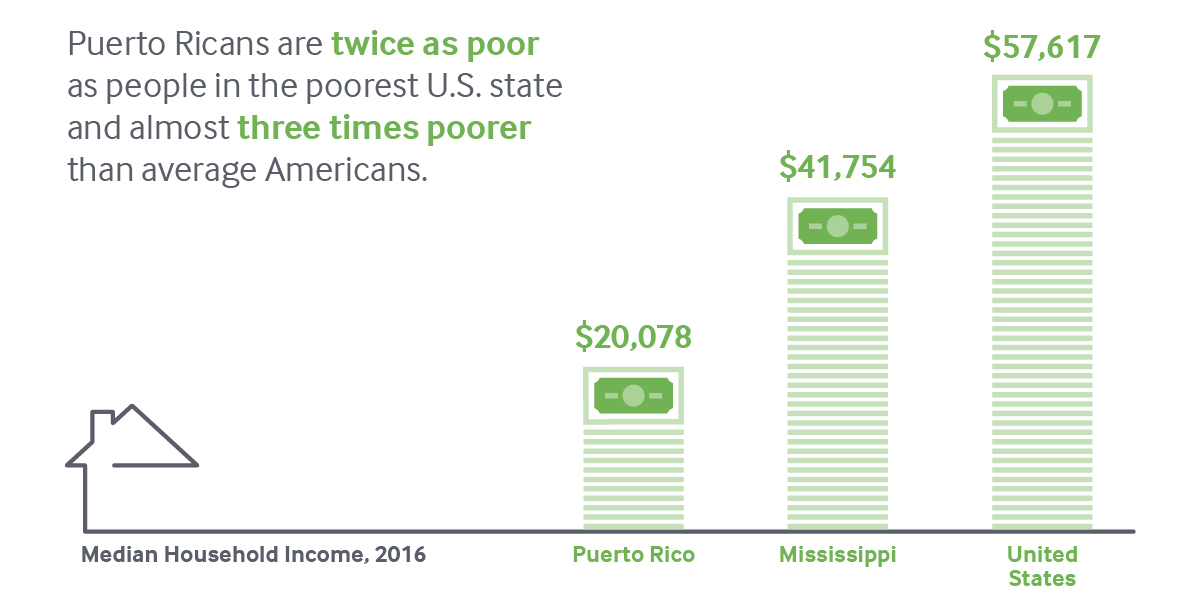 Unlike U.S. states, Puerto Rico does not have a state health insurance marketplace or access to the federal marketplace, where individuals can buy coverage.2 Instead, Puerto Rico was given additional Medicaid dollars under the Affordable Care Act (ACA), but through a much different funding formula than the rest of the nation. “The decision was made to just give Puerto Rico an infusion of Medicaid funds [under the ACA] because people are so poor down there that nobody thought a private insurance market was viable,” said Sara Rosenbaum, a professor of health law and policy and one of the authors of a George Washington University report on Puerto Rico published in November.

This infusion of Medicaid funds was wholly inadequate to begin with, she said, because Puerto Rico receives federal funds for Medicaid up to an annual ceiling, which is set at 55 percent of expenditures. Once the ceiling is reached, the territory must pay for the program with its own funds.

By contrast, the federal government reimburses states in the range of 50 percent to 83 percent, based on an income-based formula. If Puerto Rico were a state, it would receive the maximum of 83 percent, according to the Medicaid and CHIP Payment Access Commission (MACPAC). Based on MACPAC’s projected Medicaid spending for 2018, Puerto Rico faces a gap in Medicaid funds of $877 million. That doesn’t include any estimates of what it will cost to rebuild the system in the aftermath of Hurricane Maria.

All this adds up to Puerto Rico shouldering a disproportionate share of health care costs—for U.S. citizens who are particularly financially vulnerable and in poorer health when compared to those on the mainland. This, combined with the devastation of the fifth largest hurricane to ever hit the United States and Puerto Rico’s debt of $72 billion, makes it difficult for the island to invest the resources it needs for its health care system to recover.

You’ve got this extreme poverty, extreme deprivation, high dependence on public programs, gross underfinancing of public programs to the point that the underfunding of the health care system is one of the major factors associated with their economic crisis before the hurricane.

“You’ve got this extreme poverty, extreme deprivation, high dependence on public programs, gross underfinancing of public programs to the point that the underfunding of the health care system is one of the major factors associated with their economic crisis before the hurricane,” said Rosenbaum.

As Puerto Rico works to rebuild its health system, there are valuable lessons it can learn from New Orleans, where safety-net clinics were transformed into medical homes after Hurricane Katrina through targeted federal grants.

After Katrina knocked out much of the health care network in New Orleans, the federal government awarded Louisiana $100 million to restore and expand its safety-net services. The state used this steady source of funding to innovate and transformed community-based clinics into patient-centered medical homes that provide round-the-clock access to primary care and other enhanced services for patients.

Researchers observed increases in primary care clinics, patient encounters, and the number of patients served through this expansion of the New Orleans primary care system.

Financial support for natural disaster recovery in the aftermath of Katrina provides a clear precedent for how to address Puerto Rico’s immediate need: a direct investment into the health care system.

“They have to stabilize their hospitals, they’ve got to get supplies and clinic sites back open, they’ve got to try and take stock of their workforce really quickly, and figure out how to deploy whatever assets they have to get primary care services back on line,” Rosenbaum said.

In a Dec. 6 letter, a group of senators called for increased funding for Puerto Rico’s Medicaid program and urged Congress to eliminate the cap on Medicaid funding.

The post-Katrina investment in health infrastructure offers valuable lessons for Puerto Rico as it faces a unique, albeit tragic, opportunity to rebuild and improve its health system after the devastation of Hurricane Maria.

1 Office of the Assistant Secretary for Planning and Evaluation, Evidence Indicates a Range of Challenges for Puerto Rico Health Care System (ASPE, U.S. Department of Health and Human Services, Jan. 12, 2017).

2 Puerto Ricans affected by the hurricane are eligible for a special enrollment period to access a health plan, but this is only an emergency measure, according to a report in Kaiser Health News.