The Independent Payment Advisory Board, or IPAB, has been a popular target for critics of the Affordable Care Act (ACA) since the law passed, so eliminating IPAB, either separately or through wholesale ACA repeal, could be high on the legislative agenda in the new Congress. The strange thing is: IPAB has never been appointed or met. So what’s all the fuss about?

IPAB (if it were ever convened) would consist of 15 presidentially appointed experts with substantial authority to control growth in Medicare spending if Congress and the President fail to do so. Before the ACA’s passage, Congress and the Administration had had a pretty difficult time keeping Medicare costs in check, in part because of political opposition to necessary reform. Acknowledging this failure, Congress gave IPAB authority to impose unilateral cost control measures (unless overridden by a congressional supermajority) if Medicare spending, per beneficiary, were projected to grow faster than a prespecified rate. From 2014 to 2017 this rate was the average of the overall consumer price index (CPI) and the medical components of the CPI. After 2017, the threshold was to be gross domestic product (GDP) plus one percentage point. Through IPAB, Congress was in effect taking itself, and politics, out of Medicare cost control.

Congress did impose some limits on IPAB. It couldn’t, for instance, reduce Medicare benefits or eligibility, or cut hospital payments until 2020, since the ACA took other bites out of hospital fees. But otherwise, IPAB would have pretty free reign.

When the ACA passed, it looked like IPAB would have plenty to do. Medicare costs had exceeded IPAB’s spending thresholds in 21 of the previous 25 years. The Congressional Budget Office projected that the panel would save $15.5 billion over 10 years.

Then three things happened. First, Senate Republicans made it clear they would filibuster any IPAB appointees, who need Senate confirmation.

Second, even after the Senate changed its rules to require only 51 votes to confirm presidential appointees, the President never nominated any IPAB members.

Third, it turned out IPAB wasn’t needed, which is likely why the President decided not to expend any political capital trying to create it. Medicare spending growth has, quite unexpectedly, slowed dramatically over the past several years, staying under IPAB’s thresholds. As the exhibit below shows, per-beneficiary Medicare spending is not currently projected to exceed the IPAB thresholds until 2022. 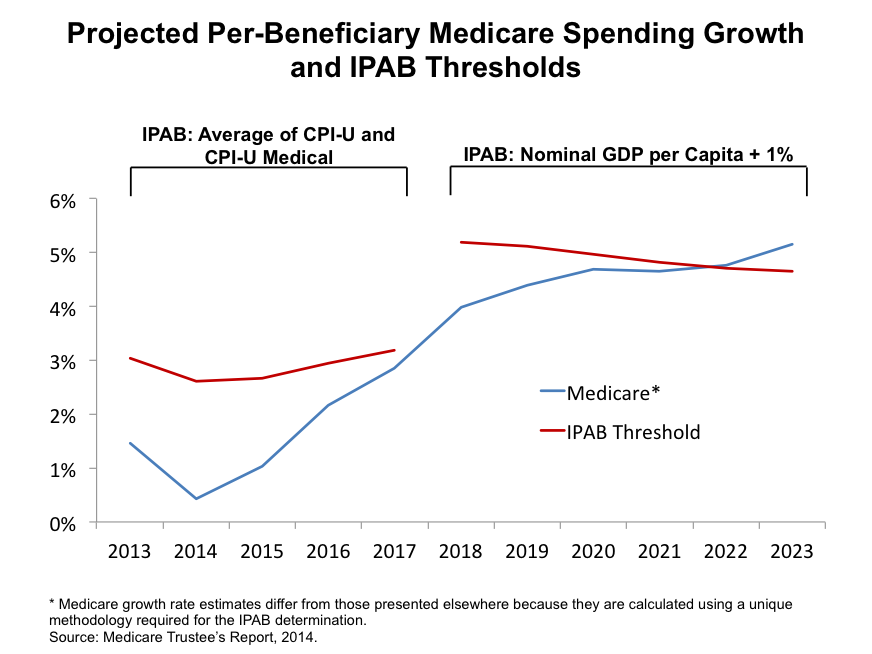 Nevertheless, IPAB is philosophically suspect among critics of the federal government. To detractors, its unusually broad authority seems like government overreach. The fact that Medicare costs are currently rising too slowly to trigger IPAB intervention is no guarantee costs won’t rise faster in the future. From this standpoint, critics likely feel it’s better to kill the monster before it ever sees the light of day.

Another reason for ACA critics to prioritize repealing IPAB is that it could be a cheap win. ACA supporters are unlikely to fall on their swords defending the board, since its value is still only theoretical.

In the complex health care chess game about to unfold in the next Congress, expect IPAB to be in play. Whether it will remain on the board when the dust clears is anyone’s guess, but at this point neither side seems to value this piece all that highly. Five years from now, if Medicare costs resume high rates of growth, they may feel differently.