The Obama Administration has released final regulations governing plans sold on the Affordable Care Act’s (ACA) health insurance marketplaces. The rules set a wide range of requirements for participating insurers to help smooth the operation of the marketplaces and improve the consumer experience. One provision implements a new continuity of care protection for consumers in the federally facilitated marketplaces (FFM). It is designed to ensure that consumers in the middle of a course of treatment aren’t left in the lurch if their doctor or hospital is terminated from their health plan’s network.

What Are the New Continuity of Care Requirements for Insurers?

As we previously described on this blog, the proposed rule tried to prevent disruptions in care for patients in an “active course of treatment” when a provider is terminated from the health plan network “without cause,” i.e., if quality of care or malpractice were not triggering factors. In such circumstances, insurers would be required to allow patients to continue to see the provider for a limited time, without having to face the higher cost-sharing associated with out-of-network care. The protection would kick in only if the provider was terminated.

The administration finalized its proposed continuity of care protections largely without changes, although they did modify some provisions in order to better align with existing state standards and the model law adopted in 2015 by the National Association of Insurance Commissioners (NAIC). For example, the final rule extends the right to continuity of care for pregnant women through the postpartum period, which is consistent with the NAIC’s model law as well as 29 current state laws.1

The administration’s final rule clarifies that the new continuity of care standards are not intended to preempt existing state laws, and that federal officials will defer to the states’ enforcement of such laws, so long as they have “substantially similar” or “more stringent” standards. We’ve identified 39 states and the District of Columbia that appear to have similar standards to those outlined in the federal rules, although the duration of the protection varies considerably from state to state.2  Sixteen states arguably have more stringent protections because they extend continuity of care rights to enrollees that have switched to a new health plan.3 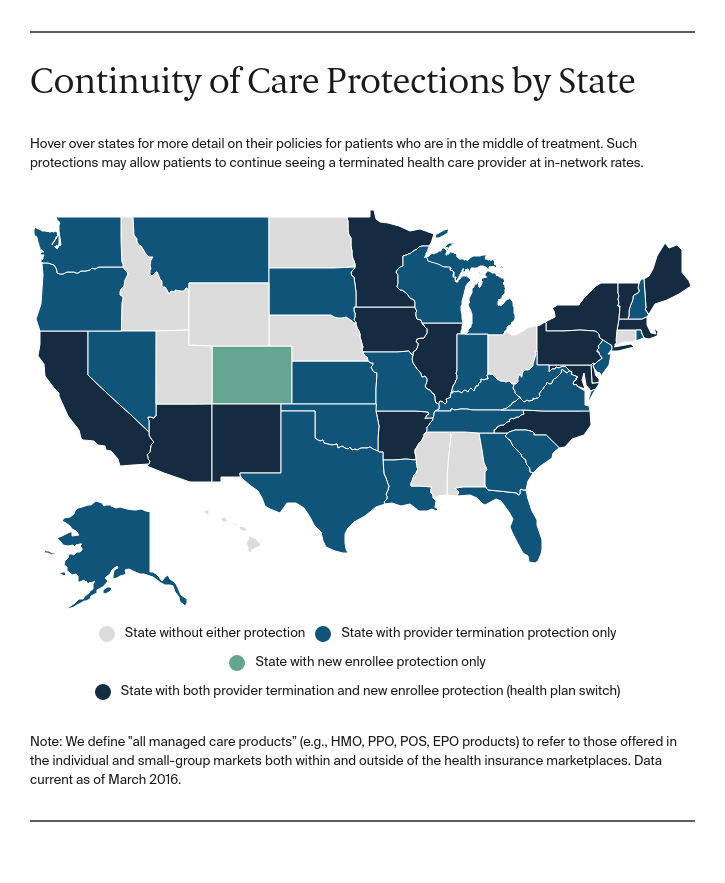 Eleven states do not have continuity of care protections as the federal rule defines them. But of these, only consumers in Alabama, Mississippi, Nebraska, North Dakota, Ohio, Utah, and Wyoming will gain from the new protections since the regulations apply only to plans sold through the federally facilitated marketplaces. Some of these states may consider adopting the new NAIC model act, in part because federal officials have indicated that states that do so will not be preempted by the new federal standards.

The stakes are high for patients in the midst of treatment, many of whom have established trusted relationships with their providers—relationships that can be critical to their quality of care and ultimate health outcomes. The new federal continuity of care standards will help patients maintain those relationships through their course of treatment. At the same time, in the wake of evidence that significant numbers of marketplace enrollees are changing plans each year in order to maximize their premium tax credits, state and federal officials may want to consider following the example of the 16 states that extend continuity of care protections to new enrollees. In either case, as these protections are implemented, federal and state regulators will need to closely monitor insurer compliance with the new standards, as well as consumers’ experiences with continuity of care, particularly if marketplace insurers continue to narrow their provider networks by terminating certain providers mid-year.

In addition, there are a few states that run their own marketplaces—Connecticut, Hawaii, and Idaho, for example—that do not have any continuity of care standards in place. While the federal rule does not apply in these states, it could—in addition to the language offered in the NAIC model law—provide an important impetus to take action to set minimum continuity of care standards.

1 States define the postpartum period in different ways. Some allow the insurer to define it (as does the federal rule), others set it at up to six weeks, 60 days, or some other period; a few extend it only to the first postpartum office visit.

2 In some states, the protections apply to certain plans only, such as HMOs. The federal rules apply to all plans offered through the federally facilitated marketplaces.

3 Four of these states—California, Maine, Massachusetts, and Minnesota—apply this protection to the group market only.