What Are the Potential Effects of the Graham-Cassidy ACA Repeal-and-Replace Bill? Past Estimates Provide Some Clues

Last week, Sens. Lindsey Graham (R–S.C.) and Bill Cassidy (R–La.) unveiled congressional Republicans’ latest bill to repeal and replace the Affordable Care Act (ACA). The Congressional Budget Office (CBO) has indicated that it will not release a score of the bill that includes its effects on insurance coverage for several weeks, but Senate leaders have indicated they will hold a vote without a score. The bill, however, is similar to prior ACA repeal-and-replace bills for which we do have CBO scores. Based on those estimates, it is likely that the bill, if enacted, would lead to a loss of health insurance for at least 32 million people after 2026.

The bill can be boiled down to five key provisions: 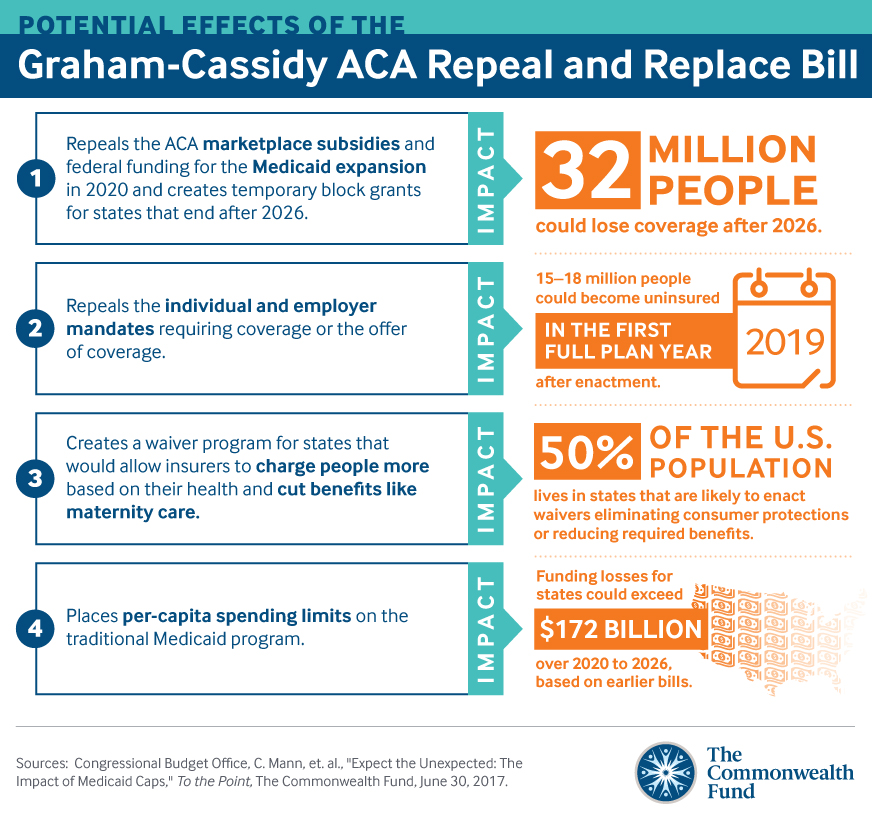 Repeal with Temporary Block Grants. The bill repeals the ACA’s marketplace subsidies and Medicaid expansion, which currently cover about 30 million people. The Center on Budget and Policy Priorities (CBPP) estimates Graham-Cassidy would cut $239 billion from current spending levels, and then divide the remaining funding among states according to a complicated block-grant scheme that results in gains for some states at the expense of deep losses in other states. CBPP projects that the states that would lose the most funding are those that expanded Medicaid, including highly populated states like California and New York.

But all of that grant funding vanishes after 2026. CBO estimated the effects of a repeal of the ACA’s subsidies and Medicaid expansion in January. The bottom line: elimination of those provisions in combination with a repeal of the law’s individual mandate could lead to a loss of health insurance coverage for at least 32 million people. Compounding the coverage losses, Leighton Ku and colleagues at George Washington University have estimated that a repeal of the coverage expansions would have severe nationwide economic effects, leading to a loss of 2.6 million jobs.

Ingredients for Individual Market Instability. While supporters of the Graham-Cassidy bill claim it is market-based, it contains the ingredients for market instability, including the immediate repeal of the penalties for the individual mandate requiring health insurance. CBO’s prior analyses of the elimination of the individual mandate found that 15 million to 18 million people would become uninsured in the first full plan year after enactment (in this case 2019), as people dropped their coverage from all sources and insurers left the marketplaces. CBO also projected that premiums in the individual market would climb by 15 percent to 20 percent in the first plan year. The majority of that increase would come from the repeal of the mandate penalties: insurers would expect that those who remained in the pool would be the least healthy. And as the CBPP has pointed out, uncertainty over how states would use their block-grant funding would likely lead to even greater instability in the individual market.

Graham and Cassidy try to stem these potential market imbalances in two ways. The bill would bring back the temporary premium stabilization funds for insurers featured in both the Senate and House bills, but only for two years. Then it would allow states to apply for waivers that would let insurers charge people with health problems higher premiums, and change other ACA consumer protections such as bans on lifetime benefit limits and comprehensive coverage requirements. CBO’s analyses of a similar waiver in the House-passed American Health Care Act estimated that half the U.S. population could live in states that would likely take up such waivers, shutting out millions of older adults and people with health problems from the individual market, as in the pre-ACA days.

Reaching Beyond the ACA into Medicaid. The Graham-Cassidy bill, like the earlier Senate and House bills, reaches well beyond the ACA and makes the deepest cuts in the Medicaid program since its inception in 1965. Like those prior bills, it places a per-enrollee cap on what the federal government provides to states for their programs. This cap would threaten the health care of an additional 65 million people who depend on the program, including the elderly, disabled, children, pregnant women, and very poor adults. Cindy Mann and colleagues at Manatt Health Solutions estimated that the spending caps in a version of the Senate repeal-and-replace bill earlier this summer would result in federal  spending cuts of $172 billion over 2020 to 2026. And Al Dobson and colleagues found that, under the House-passed bill, the per-capita caps in that bill would result in a loss of $3.6 billion in revenues for safety-net hospitals alone over 10 years. The Graham-Cassidy bill imposes tighter annual limits in later years than both these bills, so losses may exceed these earlier estimates.

A Need for Public Discussion and Bipartisanship on Health Care

By repealing the ACA’s coverage expansions and cutting deeply into the Medicaid program, the Graham-Cassidy bill threatens the health care of as many as 100 million people, from newborns to the elderly. The fundamental purpose of insurance coverage — that it is essential to enabling people in the United States to get timely access to health care — has been sorely missing from this year’s debate over the future of our nation’s health insurance system. This is partly because of the lack of Congressional hearings on the Graham-Cassidy bill and its House and Senate repeal-and-replace predecessors. In stark contrast, the hearings held this month by Sens. Lamar Alexander (R–Tenn.) and Patty Murray (D–Wash.) to inform their search for a bipartisan solution to the ACA’s marketplaces have allowed for a vetting of options and their potential effects. Public discussion and deliberation may not guarantee sound, bipartisan policy solutions, but they at least enable their possibility.