Health insurance rates for working-age Americans have improved over the past decade. But not everyone with health insurance today has adequate financial protection. About one-fourth of insured Americans are underinsured because they have significant coverage gaps or high out-of-pocket costs. And all consumers are vulnerable to surprise medical bills, or balance bills for out-of-network care. These balance bills arise when insurance covers out-of-network care, but the provider bills the consumer for amounts beyond what the insurer pays and beyond cost-sharing, as well as in situations where out-of-network care is not normally covered but the selection of provider is outside the consumer’s control.

Consumers are most likely to receive surprise medical bills from health providers outside their insurance plan’s network after receiving emergency care or medical procedures at in-network facilities. In the latter cases, for example, consumers may select a surgeon and facility in network, but discover that other providers, such as an anesthesiologist or surgical assistant, are out of network. These unexpected medical bills are a major concern for Americans, with two-thirds saying they are “very worried” or “somewhat worried” that they or a family member will receive a surprise bill. In fact, these bills are the most-cited concern related to health care costs and other household expenses. 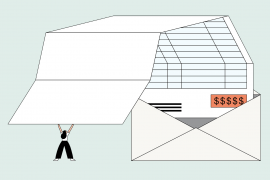 Despite Recent State Activity, Consumers in Most States Are Not Protected from Balance Billing

We conducted a study, published in June 2017, that found that 21 states had laws offering consumers at least some protections in a balance billing situation. But only six of those states — California, Connecticut, Florida, Illinois, Maryland, and New York — had laws meeting our standard for “comprehensive” protections.

New Jersey has met our criteria for comprehensive protection by creating a strong dispute-resolution process to establish a payment amount for the out-of-network service. Other states have recently acted to protect consumers from balance billing in a more limited way that does not meet our criteria. For example, Missouri’s protections against balance billing apply only if the provider and insurer voluntarily agree to participate in the process.

Interest in a Federal Solution to Balance Billing

At the same time, interest has grown in federal measures, in part, because only federal legislation can protect those in self-funded insurance plans that are exempt from state regulation. During the 115th Congress, proposals were released by Senator Bill Cassidy (R–La.), Senator Maggie Hassan (D–N.H.), Representative Lloyd Doggett (D–Texas), and Representative Michelle Lujan Grisham (D–N.M.). The Cassidy proposal has bipartisan support, with three Democrats and two other Republicans as cosponsors.

Federal approaches vary along some of the same lines as state laws. For example, the Hassan bill relies most heavily on a dispute-resolution approach. By contrast, the Cassidy proposal relies on a payment standard that is the greater of a) the median in-network rate paid by the insurer or b) 125 percent of the average allowed amount across payers. Several federal proposals make protections contingent on failure of providers to notify the consumer that they could be billed by an out-of-network provider. States that have enacted protections have mostly viewed such contingent protections as an insufficient means of protecting consumers. Federal proposals also vary in the degree to which they allow a state role in implementing protections.

Some federal proposals, like some state laws, have potential gaps. For example, some address balance bills only from hospital-based physicians such as anesthesiologists and radiologists. Also, state laws and federal proposals mostly do not address ground or air emergency transport providers.

The bipartisan interest in the surprise billing issue offers the potential for federal action in the new Congress. States are frustrated by their inability to address all insurance plans. And states without laws have often faced opposition from stakeholder groups, even when there is a consensus around protecting consumers. A federal solution could offer a more comprehensive approach, while giving states appropriate flexibility to seek an approach fitting their particular market environments.