In September, we wrote about the state of play for federal legislation on surprise medical bills. At the time, two bills had emerged from congressional committees: S. 1895, approved by the Senate Committee on Health, Education, Labor, and Pensions (HELP), and H.R. 2328, approved by the House Energy and Commerce (E&C) Committee. Twenty-eight states have enacted consumer protections to address surprise medical bills — 13 of them meet our standard for comprehensive protection. But state laws cannot fully protect consumers. They can’t help people who have self-funded employer plans, which bear insurance risk for their employees and are offered by many employers. Federal ERISA law bars states from regulating such plans. States also are restricted from protecting people who receive surprise bills because of air ambulance services.

A Flurry of New Federal Proposals

On December 8, 2019, Sen. Lamar Alexander, chair of the Senate HELP Committee, Rep. Frank Pallone, chair of the House E&C Committee, and Rep. Greg Walden, ranking member on E&C, announced a compromise package that builds on the bills already approved by their committees. The original bills were similar, but the new HELP/E&C proposal resolved differences between them. On December 11, 2019, Reps. Richard Neal and Kevin Brady, chair and ranking member on the House Ways and Means (W&M) Committee, announced their agreement on an approach that differs considerably from the HELP/E&C proposal.

Both the HELP/E&C compromise package and the W&M proposal are alike in assuring consumers that they will face no costs in surprise billing situations beyond those associated with in-network cost-sharing. The proposals differ in how to establish what insurers will pay out-of-network providers. The W&M proposal looks to voluntary negotiation backed up by independent dispute resolution (IDR) to set rates and thus aligns more closely with the approach advocated by hospital and physician groups. The HELP/E&C proposal creates a payment standard with a backup IDR process and represents an attempt to bridge the gap between provider and insurer positions.

Differences Across the Proposals

Like the two committee-backed bills, the HELP/E&C compromise bases payment on the median amounts paid by a health plan to its in-network providers. It uses the in-network rate for 2019 and inflates it forward to the year of the service, thus guaranteeing that rates negotiated after the bill’s passage would not influence the standard. The W&M proposal does not include a payment standard, preferring voluntary negotiations backed up by IDR.

The HELP/E&C compromise has a backup IDR process, the approach preferred by providers because it avoids a government-set rate. It calls for an independent arbitrator to determine payment in cases where providers are not satisfied with the amount paid under the payment standard. The bill lowers the threshold bill amount for eligible cases from $1,250 (in the E&C bill) to $750 so that it will be available in more cases. Because it has no payment standard, the W&M proposal makes IDR the means of settling payment disputes, although it calls for voluntary negotiations to precede use of IDR and looks for parties “to work out differences without interference.” Both proposals include a set of guardrails to reduce the potential for misuse of the IDR process. Fewer cases going to IDR reduces the cost of operating the system and should mitigate potential inflationary effects.

None of the proposals offers protections for users of ground ambulance services, in part because these services are often delivered by public-sector providers. However, the HELP/E&C compromise package follows the HELP bill in extending protections to people using air ambulance services, which pose great consumer risk for significant surprise bills. This package includes an IDR option for cases above $25,000. The W&M proposal (as reported in the committee's summary), like the original E&C proposal, does not address air ambulance services.

These proposals aim to protect consumers from the cost burdens created by surprise medical bills and to find common ground by addressing concerns of providers and insurers. There was some thought that the new proposals signaled an opportunity to include surprise billing legislation in the year-end budget package. However, that hope proved unfounded, especially after the W&M leaders announced a proposal that differed so much from the HELP/E&C compromise package in how to establish what insurers pay out-of-network providers. Although more compromise is needed before Congress can pass a bill, any further delay in federal action places the financial security of millions at risk. 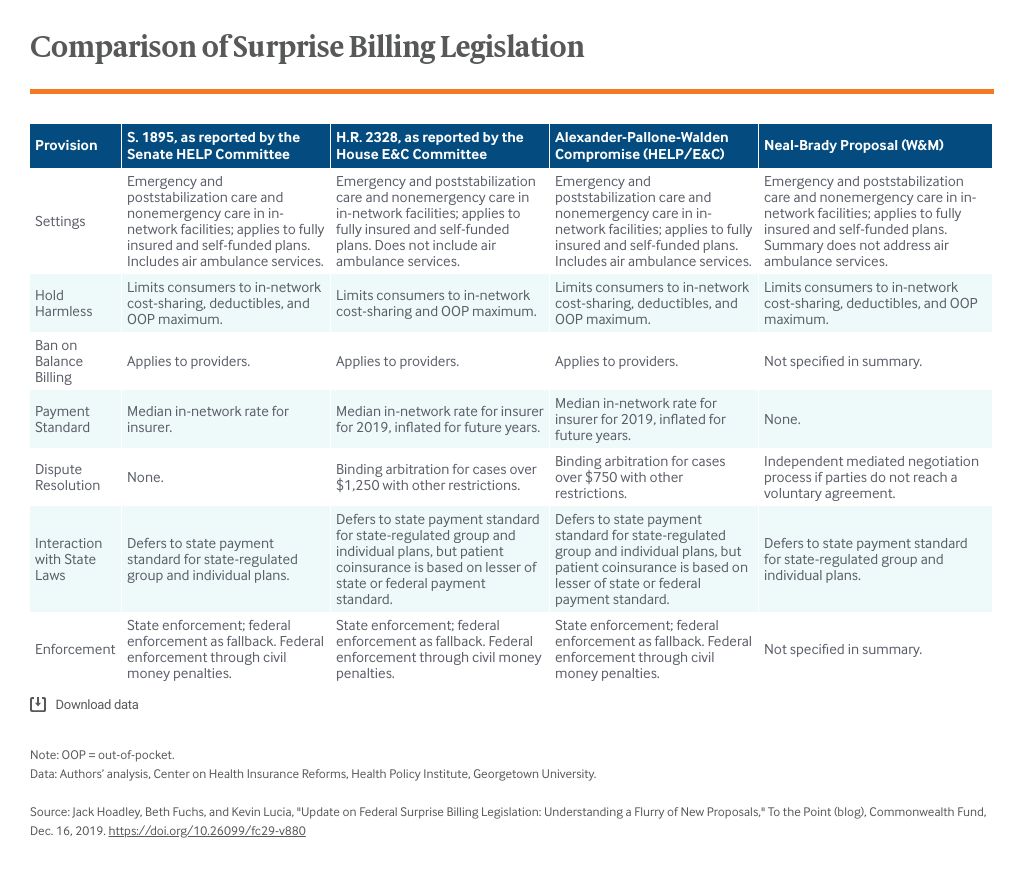