Some states have laws to protect consumers by requiring insurers to limit enrollee responsibility to no more than in-network cost-sharing amounts and by prohibiting providers from seeking payment of balance bills. But to fully address the issue, it is important to have standards to ensure quick and fair resolution of payment disputes between insurers and providers. Despite bipartisan support for balance billing protections, policymakers have struggled to identify a method for resolving payment disputes that is acceptable to both providers and insurers. In this post, we’ll discuss various payment standards adopted by states and key considerations for policymakers.

While 28 states have laws addressing balance billing, only 13 have adopted comprehensive protections that include a method for resolving payment disputes. These 13 states have taken three different approaches: a payment standard, a dispute resolution process, or a blend of the first two. 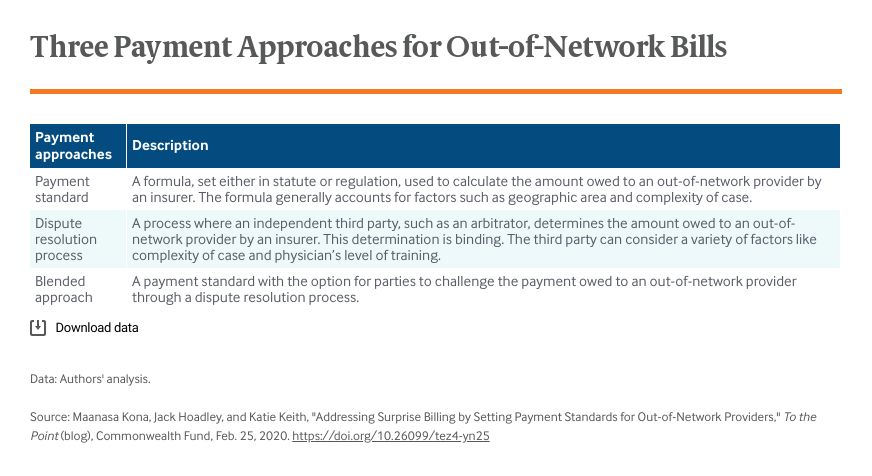 We focus here on the seven states that have adopted a payment standard for out-of-network bills. To set a payment standard reflecting the needs of their insurance markets, states look primarily to three data sources: a predetermined fee schedule (such as the Medicare fee schedule, which sets a reimbursement amount for each service), publicly available data from multiple insurers collected in a benchmarking database (such as a state-run all-payer claims database), or an insurer’s own internal data on the amounts they have agreed to reimburse providers in their network. 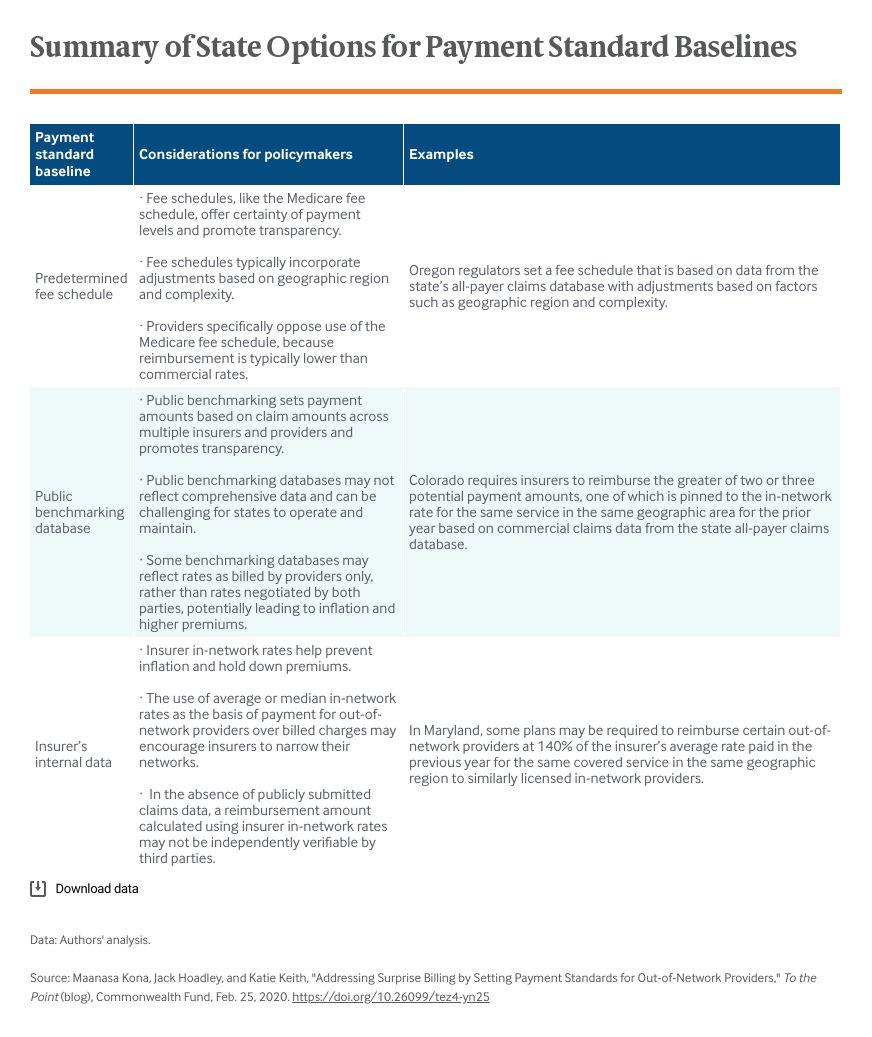 State approaches vary significantly; each has advantages and disadvantages. For example, a payment standard that only takes into account the amounts providers bill for a service — as opposed to negotiated rates, which are the rates insurers and in-network providers agree upon — may lead to higher health costs and premium inflation. Yet, a payment standard that relies solely on a single insurer’s in-network rate calculated using its internal (and potentially confidential) claims data could result in an opaque process because it would be hard for a provider to independently verify the calculations. Further, relying on a single insurer’s rate might be unfair if its rates don’t reflect the true market value of the service.

Considering the limitations of a single baseline, many states have combined approaches by requiring insurers to pay out-of-network claims based on formulas — for instance, the greater of or lesser of a certain multiple of what Medicare pays for the service or the average of what an insurer pays to its in-network providers for that service. Some states have worked to address stakeholder concerns. In Colorado, for instance, providers can request an inquiry into an insurer’s methodology for calculating median in-network rates. Instead of incorporating a Medicare fee schedule as is, most states have required insurers pay out-of-network claims using a multiplier above the base Medicare rate (e.g., 125% or 140% of Medicare).

In Congress, four committees have passed legislation to protect patients from balance bills. Three of the four bills include a payment standard relying on the reimbursement amounts the insurer has already negotiated with providers in its network. The Senate HELP Committee bill incorporates an insurer’s median in-network rate at the time a service is provided. House bills passed by the Energy and Commerce and the Education and Labor Committees similarly incorporate an insurer’s median in-network rate but lock in that rate for 2019 and inflate it forward to the year of service. This “indexation” in the House bill has generated concerns about continued high health care costs by locking and increasing rates over time. Maryland is the only state with a payment standard using a similar approach for certain services. By contrast, the House Ways and Means Committee bill has no payment standard, relying solely on voluntary negotiation between stakeholders and dispute resolution if no agreement is reached.

Policymakers are grappling with how to set an appropriate payment standard for resolving out-of-network claims. Because many state laws are new, there has been limited, albeit emerging, analysis of the downstream effects of payment standards on premiums and network negotiations between insurers and providers. Additional study is needed to understand the long-term impact. But the experience so far suggests that many states are committed to protecting consumers by adopting payment standards suited to their local market conditions, such as the number of providers available and the price negotiating leverage between providers and insurers in the market.