Coverage Expansion Leads to Savings in Medicaid and Beyond

Available evidence indicates Medicaid expansion is a good deal for states, with much of the cost offset by savings

According to the latest data, states that expanded eligibility for their Medicaid programs have reaped significant savings, both within their Medicaid programs and in other areas of their budgets. This new study complements a growing body of evidence showing that Medicaid expansion has given people greater access to care and made care more affordable for them while also saving states valuable resources.

This new analysis does not factor in the effects of COVID-19 and the impact on state budgets. With record high levels of unemployment and reduced tax revenue, states will be faced with both balancing budgets and meeting a growing demand for providing necessary coverage and care in the face of a pandemic. Medicaid has been an essential partner for ensuring COVID-19 testing and treatment and will continue to be a lifeline for people who may lose their job as a result of the pandemic. The need for states to expand Medicaid has never been greater.

As of May 2020, 14 states have yet to expand Medicaid, citing uncertainty about how it would impact their state budgets. Under the Affordable Care Act, states have the option to expand Medicaid to individuals with incomes up to 138 percent of the federal poverty level. For the first three years, beginning in 2014, the federal government paid 100 percent of those costs and then phased down its contribution. Beginning in 2020, states are responsible for 10 percent of the costs for the expansion population while the federal government pays the remaining 90 percent. In comparison, the federal match for traditional Medicaid populations varies from state to state based on per capita income, ranging from about 78 percent in Mississippi to 50 percent in New York and Alaska. This means most states pay between 25 percent and 50 percent of the cost for each person covered under traditional Medicaid — considerably higher than what they pay for the population covered under expansion. 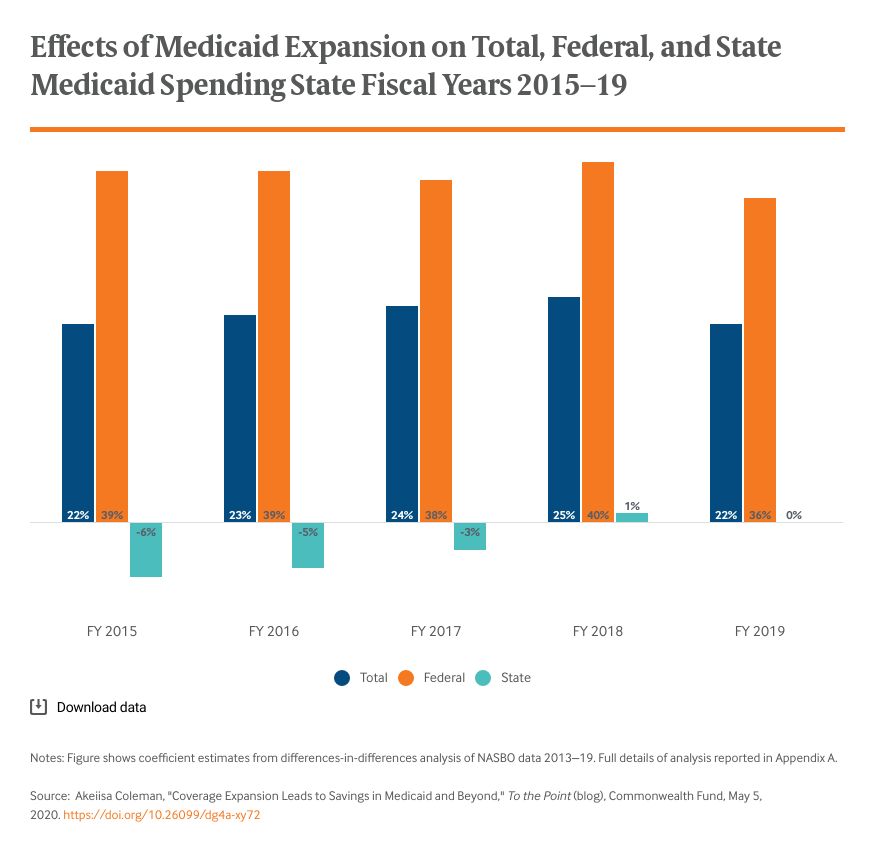 Expansion also can generate savings outside the Medicaid program. As more low-income residents gain coverage, states may spend less on uncompensated care and other health-related programs that are fully funded by the state, such as substance use disorder programs. For example, Arkansas estimated $45 million in savings for uncompensated care owing to expansion in 2021 and Michigan is expected to save $168 million in mental health and substance use disorder services in 2022. Medicaid expansion is also associated with reductions in state corrections spending, as some health care for incarcerated individuals can now be covered by Medicaid. Virginia estimated $26.9 million in savings to its corrections budget for 2020. These savings can offset the state share of expansion costs by 2 percent to 37 percent.

The available evidence indicates Medicaid expansion is a good deal for states. As the state share increases in 2020, savings within Medicaid will not be as large as in the early years. However, data suggest that much of the cost of Medicaid expansion will continue to be offset by savings within the program. States also may be able to reduce spending in some non-Medicaid areas, which can further offset costs.