The debate over Medicaid expansion is hardly new. It began in 2012 after the Supreme Court made expansion voluntary for states under the Affordable Care Act. On January 1, 2014, when the law’s coverage components became effective, 23 states immediately expanded Medicaid eligibility. In the years since, additional states have expanded their programs, and no state has dropped it. Today, 36 states are providing coverage through the expansion. (In addition, Nebraska has adopted expansion but not yet implemented.) The arguments for and against expansion have become familiar, but we are now in a starkly different time. A massive public health emergency and deepening economic crisis offer new and compelling reasons to reconsider Medicaid expansion.

First, of course, is the COVID-19 public health crisis, which has put everyone in the country at risk and placed extraordinary strain on our health care system. States are responding with their own resources; federal policymakers also have responded, providing new flexibilities and funding. Nonetheless, many states rightly wonder whether those funds will be sufficient. 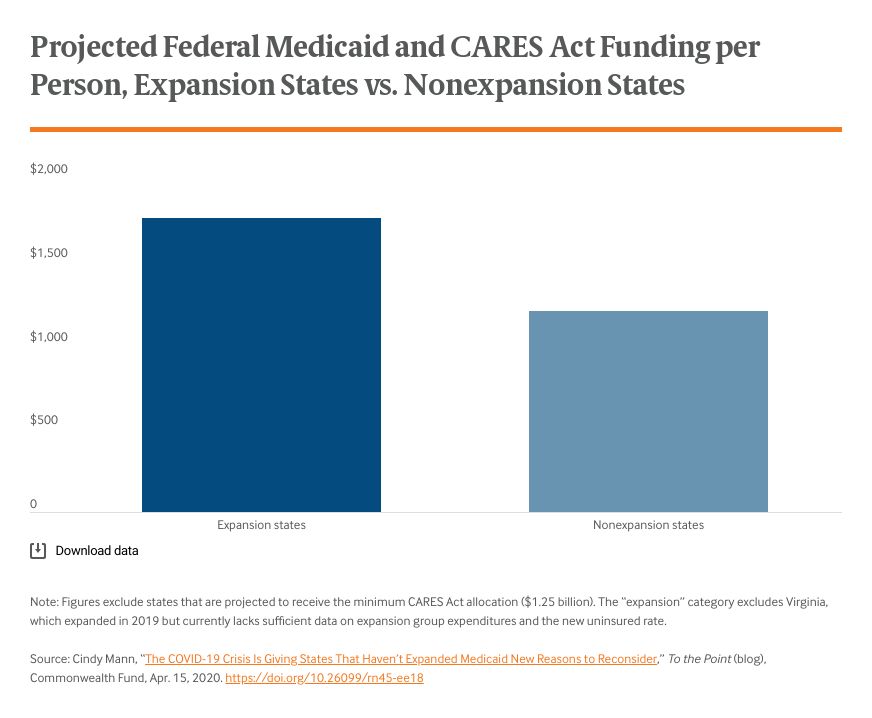 A Rising Uninsured Rate and a Fragile Health Care System

The second new reason: millions of people are losing their jobs, income, and health insurance because of the crisis. As the uninsured rate skyrockets, states that have expanded Medicaid will be in a much stronger position. Medicaid expands when people lose their jobs and health insurance. But in nonexpansion states, millions of low-income parents and other adults will not qualify for coverage no matter how low their income. A recent study found that in states that have expanded Medicaid, the program covered 35.8 percent of all unemployed adults ages 19 to 64; in nonexpansion states, Medicaid reached only 16.4 percent of unemployed adults. As a result, the uninsured rate among the unemployed in nonexpansion states was nearly double the rate in expansion states (42.5% vs. 22.6%).

It’s important to consider the timing of an expansion. Implementation could not happen overnight but experience with expansion and previous disaster-related coverage initiatives (e.g., post-Hurricane Katrina) suggests it could be put into place relatively quickly. This is particularly true if states streamline their requests for the purpose of initial implementation and the Centers for Medicare and Medicaid Services acts with the same level of urgency it has employed throughout this crisis. Expansion could come in time to address the current COVID-19 crisis, depending on how long the crisis extends and whether it recurs. And expansion certainly could be in place to address the economic consequences of the pandemic. Another concern is states’ costs, particularly as state revenues plummet. States have found that general revenue spending has not grown as a result of expansion because of offsetting savings and reliance on other sources of funding for the nonfederal share, such as existing or recalibrated provider fees.

States that have yet to expand Medicaid are forgoing billions of federal dollars that can cover the uninsured and dramatically reduce the losses sustained by hospitals and other health providers. The current public health crisis, skyrocketing number of uninsured, and fragility of our health care system offer compelling reasons for nonexpansion states to take another look.