Did Medicaid Work Requirements Achieve Their Goals in Arkansas?

In recent years, states have pursued Medicaid work requirements, which typically make benefits contingent upon beneficiaries either working, looking for a job, or being engaged in community service, unless they are medically exempt. These policies are popular in many states whose supporters argue that they will reduce dependency on government programs. The COVID-19 crisis has complicated matters further by creating a surge in both unemployment and need for Medicaid coverage.

Arkansas has been the only state to fully implement work requirements, although these were later suspended by the courts. We recently compared low-income adults in Arkansas with adults in three other states to examine the impact of work requirements.

Our analysis found that — compared to individuals in states without work requirements — work requirements did not increase employment among 30-to-49-year-old Arkansans (the age group targeted by the policy) and did result in significant coverage losses while the requirements were in effect in 2018. During this period, the uninsured rate in this group rose from 10.5 percent to 14.6 percent. After a court order halted the work requirements in spring 2019, coverage losses largely reversed. But even then, there were notable differences in health care for adults in Arkansas who lost Medicaid compared to adults in Arkansas who maintained continuous Medicaid coverage. Those who lost coverage faced significantly higher barriers to medical care and had more trouble affording care. 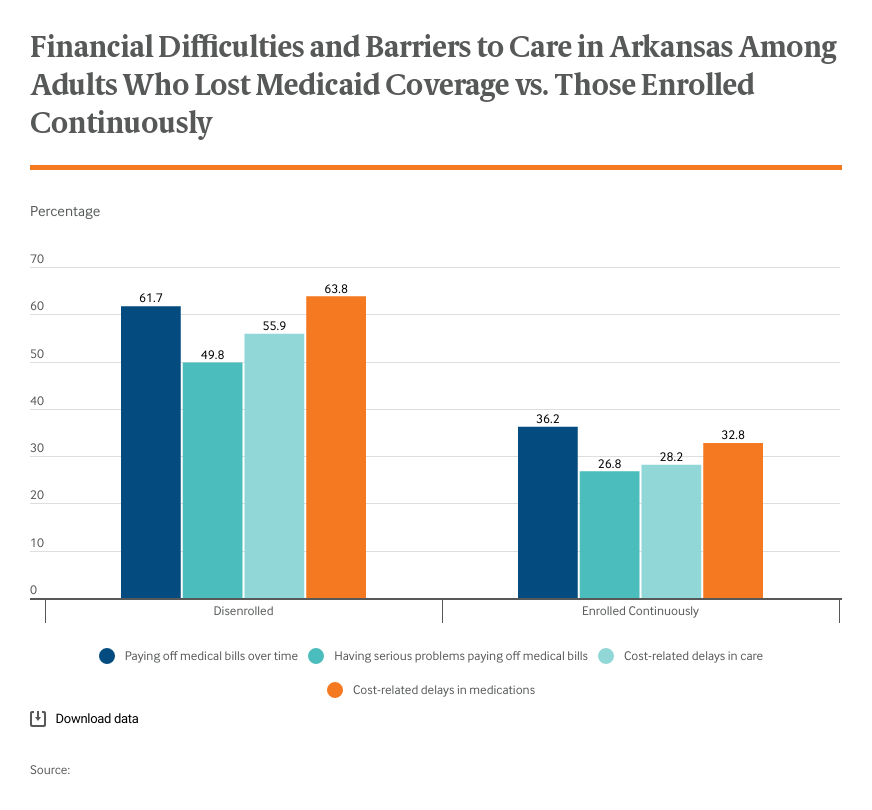 Another factor that may have led to coverage losses was the general confusion regarding the state’s work requirement. Most Arkansans in our survey (70%) were unsure if the policy was in effect, and a much smaller percentage (6%) were aware that the policy had been halted by the courts. This confusion may have discouraged some potentially eligible individuals from applying to the program.

These findings are consistent with other research on work requirements in the Supplemental Nutrition Assistance Program (SNAP), which also found that such policies can lead to widespread loss of benefits. The loss of coverage combined with no net change in employment indicates that Medicaid work requirements in Arkansas were unsuccessful in meeting their stated goals.

What’s Happening in Other States?

The potential for major coverage losses has been the central argument in court rulings blocking work requirements in Arkansas, Kentucky, and New Hampshire. Although many states still have a strong interest in implementing such policies, others — including Kentucky and Virginia — have withdrawn their plans because of leadership changes in state government.

Utah expanded Medicaid in 2018 and implemented work requirements as a condition for maintaining coverage. However, policymakers reversed course because of rising unemployment amidst the COVID-19 pandemic. With millions of Americans being furloughed or laid off, the state projected that 30 percent of enrollees would lose their coverage if the rules remained in effect.

South Carolina implemented work requirements in 2019 while avoiding traditional Medicaid expansion. Although negative coverage effects have been predicted, there is no evidence to date one way or the other on the program’s impact.

Some states have taken a different approach and focused on nonpunitive methods to encourage work. Montana has run a work promotion and training program since 2016 associated with Medicaid called HELP-Link. It is focused on removing barriers to work and has had positive results. Ninety-one percent of HELP-Link participants who completed their employment training went on to become employed, and 39 percent of participants who completed the program in 2016 experienced wage increases averaging nearly $5,000 per year. Despite this success, Montana is now proposing a more traditional work requirement policy, which could result in large coverage losses and a diversion of resources needed to support the HELP-Link program.

The COVID-19 pandemic has amplified the potential negative impact of Medicaid work requirements on the broader population. Even though Medicaid is designed for low-income people, the pandemic has shown that this can be a changing and expanding population. The recession has led to a surge in Medicaid enrollment, as millions of previously stably employed individuals have lost jobs and health insurance.

The current crisis may represent an opportunity to move away from work requirements and instead look for alternative approaches that avoid coverage losses and minimize red tape and confusion, while also removing barriers to employment for low-income adults.