Ten swing states — Arizona, Florida, Georgia, Michigan, Minnesota, North Carolina, Ohio, Pennsylvania, Texas, and Wisconsin — will likely have an outsized impact on the outcome of the 2020 presidential election and, ultimately, the future of the Affordable Care Act (ACA) and the coverage expansions it has afforded millions of Americans. While demographics, geography, and political ideology vary greatly among the swing states, their support for Medicaid expansion does not.

Half of these states (AZ, MI, MN, OH, PA) have expanded Medicaid under the ACA. Under the law, states have the option to expand Medicaid to cover individuals under age 65 with income up to 138 percent of the federal poverty level (about $17,600 for an individual or $30,000 for a family of three); 38 states and D.C. have adopted Medicaid expansion. Expansion of Medicaid has been linked to better access to care, reduced cost-related barriers to care, and better health outcomes for beneficiaries, as well as improved hospital finances, especially in rural areas.

Results from a Survey of State Health Systems 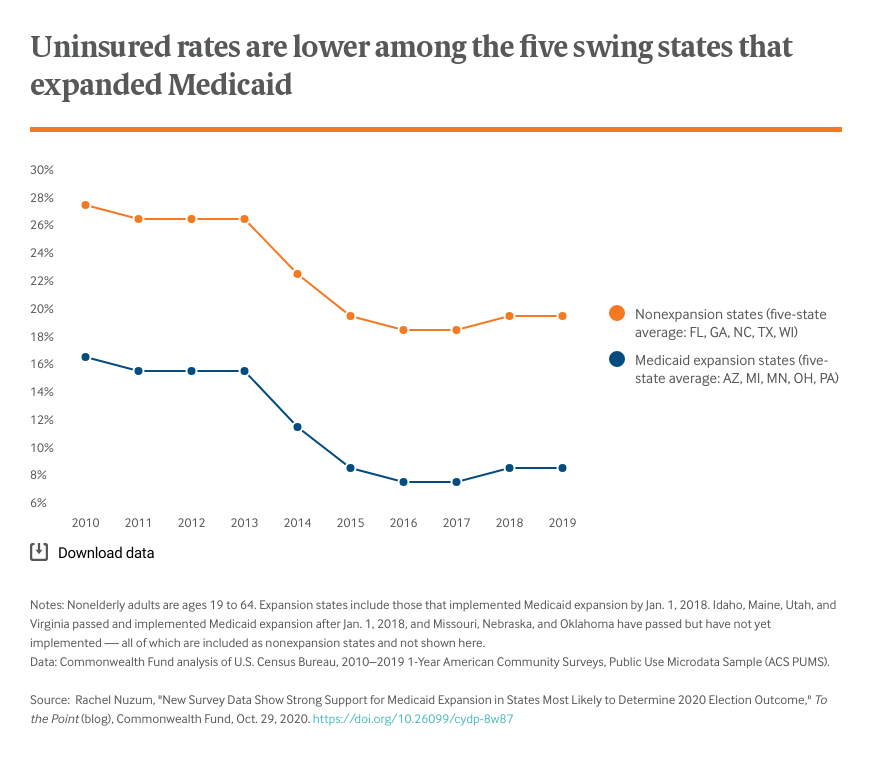 Among the swing states that have not expanded Medicaid — Florida, Georgia, North Carolina, Texas, and Wisconsin — three-quarters of likely voters say they favor expanding Medicaid coverage. Notably, those who supported expansion included more than two-thirds of Independents and just under half of Republicans. 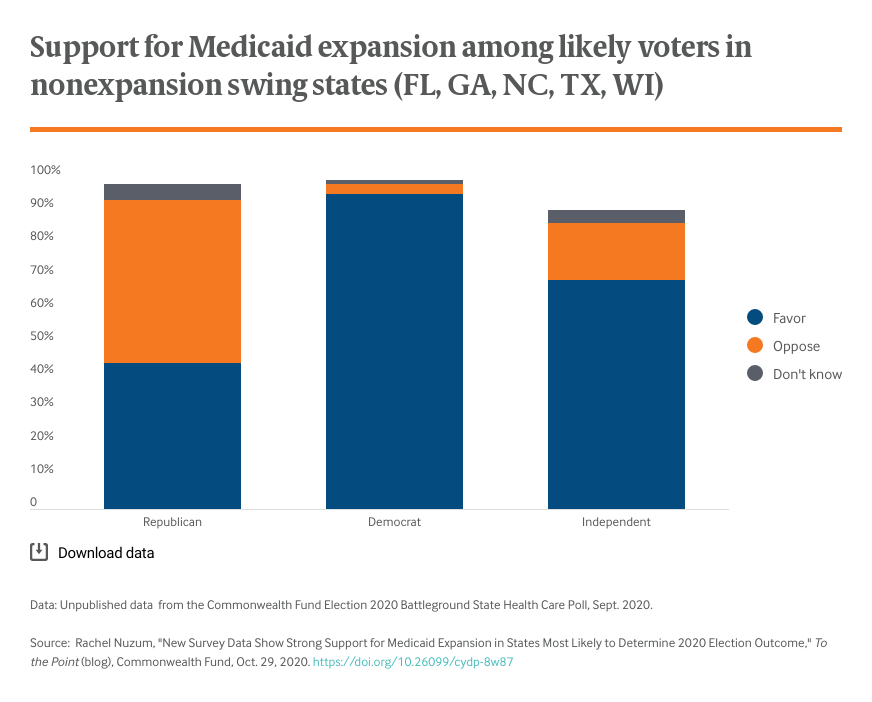 Support for expansion was noticeably high in Florida (73%) and Texas (67%). These two states have historically had among the highest uninsured rates in the country. Together they account for 27 percent of the nation’s uninsured population under age 65.

Key gubernatorial and Senate races will contribute to the likelihood of additional states moving forward on Medicaid expansion. In North Carolina, for example, Governor Roy Cooper has been a strong proponent of expanding Medicaid since taking office in 2016 but has been blocked by the state legislature in which Republicans held a super majority until recently. Cooper is running for reelection against Lt. Governor Dan Forest, a Republican who opposes full expansion. The health care debate is also featuring prominently in the state’s Senate race. Incumbent Republican Thom Tillis, a vocal opponent of the ACA and Medicaid expansion, is locked in a tight race with Democrat Cal Cunningham, who supports preserving and building on the ACA. Regardless of who wins the White House, state level and congressional races will be critical in determining if additional states expand coverage through Medicaid.

Unlike many issues facing voters in 2020, Americans across party lines support Medicaid expansion. Six states have successfully taken the decision to expand directly to the voters by way of a ballot initiative; Oklahoma and Missouri have joined the ranks of expansion states in 2020. Swing states that have expanded have seen improved outcomes, more dramatic coverage improvements, and accompanying economic and state financing benefits, demonstrably making Medicaid expansion a good deal for states and for their residents alike.

Given the ongoing debate about the future of the ACA, policymakers would be well served to make decisions based on data and evidence and take into consideration the preferences and needs of their constituents.