Who Will Pay for COVID-19 Hospital Care: Looking at Payers Across States

The cost of hospital care provided to patients with COVID-19 will be substantial. Based on current epidemiological forecasts, our estimates suggest that by October 31, 2020, the U.S. will spend approximately $24 billion on inpatient COVID-19 care, amounting to 0.6 percent of projected 2019 national health outlays. Spending will vary by state because of the intensity of disease spread and state policy decisions. Using a new tool that allows for comparisons across states and over time, this blog post looks at costs of inpatient COVID-19 care (measured at expected reimbursement rates) and who pays them — Medicare, Medicaid, or private insurance — across the country as a whole and in four states: California, New York, Florida, and Texas. These estimates depend critically on the changing geographic and demographic distribution of the virus; to address this, our tool is regularly updated with new epidemiological projections from the Institute for Health Metrics and Evaluation (IHME). COVID-19, particularly in the first wave of the pandemic, had disproportionate impacts on low-income and elderly groups, which are primarily covered by public insurance. Our findings suggest that because public insurance payment rates are much lower than private payer rates, hospitals that bore the brunt of the initial COVID-19 surge are likely to have received lower reimbursements than those serving younger and more affluent populations.

Use the COVID-19 Cost Simulator.

View documentation about the Cost Simulator.

The brunt of the first wave of the pandemic fell on New York. Through the end of May, New York State incurred inpatient costs of $2.7 billion, while other states spent much less — only 10 percent as much in Florida and 20 percent in California. Since May, however, caseloads have increased substantially outside New York. Looking at both outbreaks, through October 31, total spending on COVID-19 inpatient care is likely to range from $1.9 billion in Texas to about $2.1 billion each in California and Florida and $2.9 billion in New York.

Because the outcomes of COVID-19 are closely related to age, the vast majority of people who have sought care, particularly hospital care, for symptoms have been 65 or older and have been covered by Medicare. There are only minor differences among states in the insurance coverage patterns of hospitalized patients. In Florida and Texas, states that did not expand Medicaid, the share of hospitalized patients who are uninsured is about two and half times that of New York and California. But because most Medicaid beneficiaries and uninsured people are relatively young, these absolute differences are small. 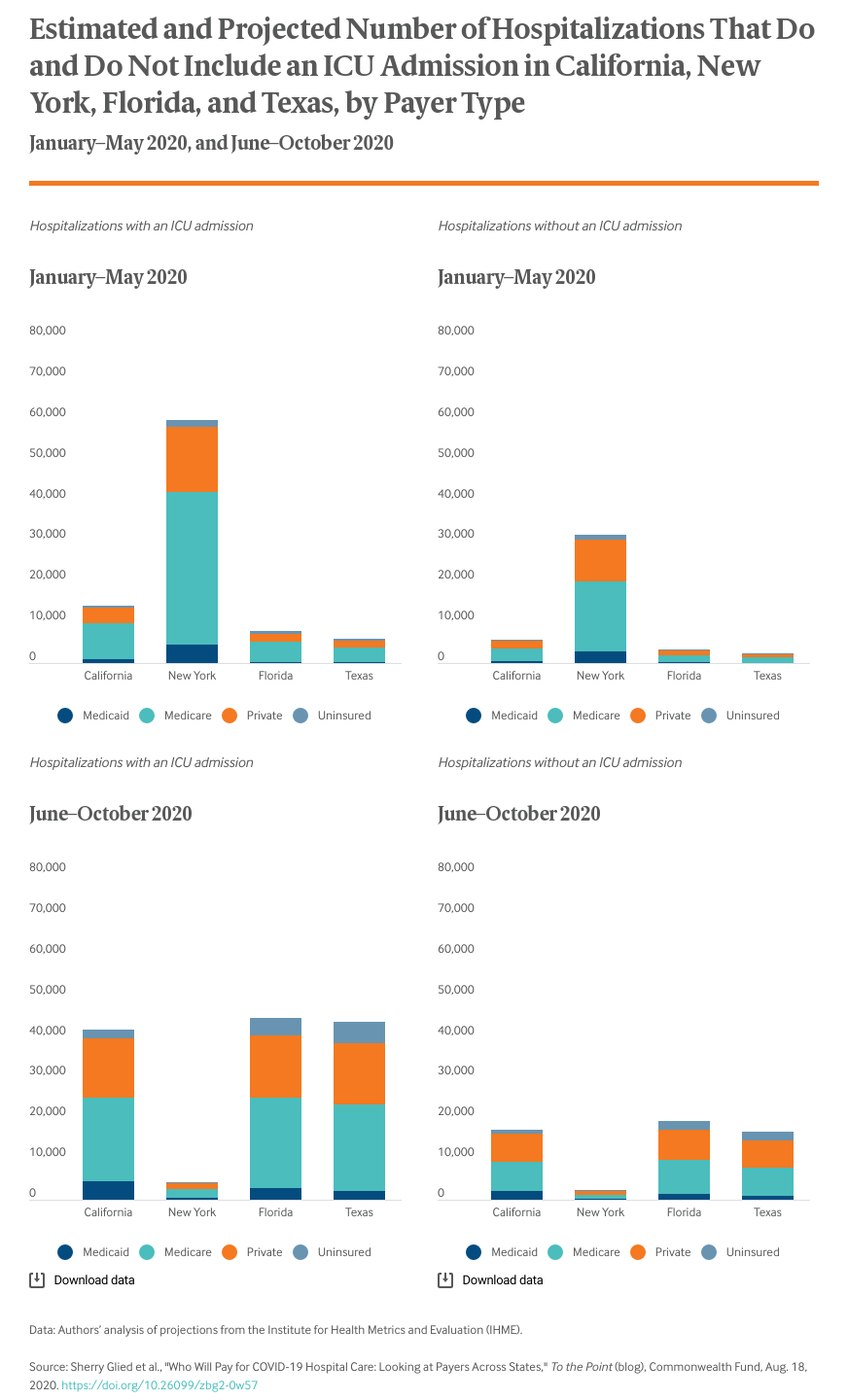 These price differentials have very large impacts on the distribution of epidemic costs. For example, our estimates assume that care for uninsured people with COVID-19 will be reimbursed at Medicare rates as specified under the CARES Act. As the figures show, under that assumption, the reimbursement for care provided to uninsured patients will account for a very small share of the total and will not vary much across states.

If instead hospitals billed (and collected) for the care of uninsured patients at list prices, which are more than three times as high as private insurance reimbursement rates and as much as six times as high as Medicare rates, the care of uninsured COVID-19 patients would account for about one-quarter of estimated total costs in Texas and Florida, though much of this would be written off as uncompensated care. 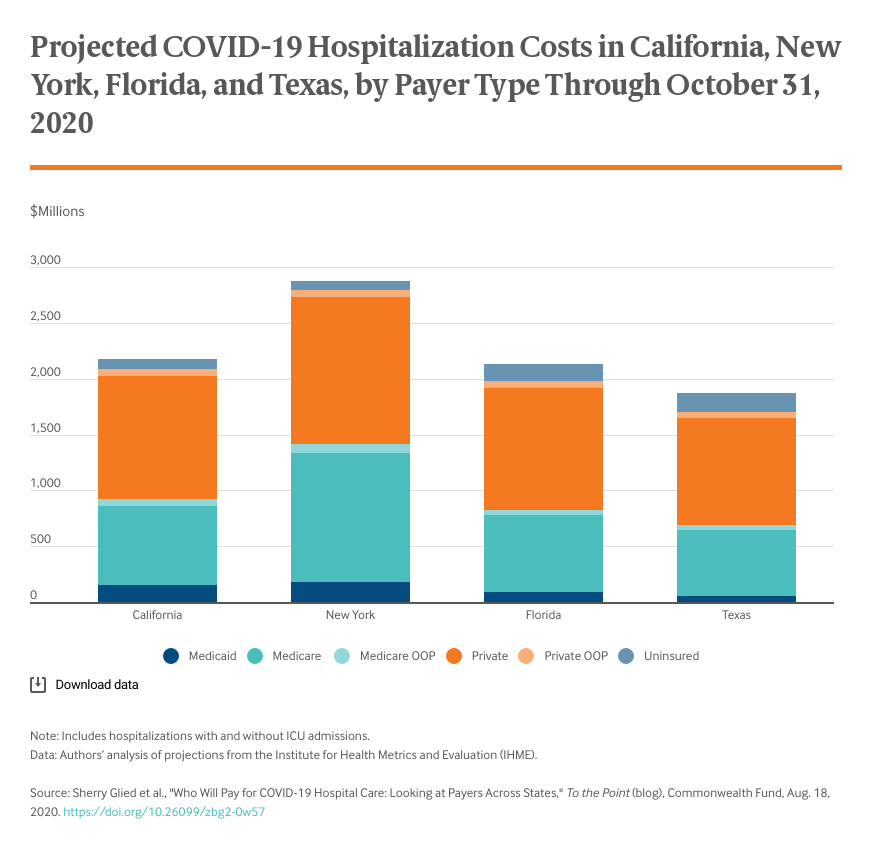 The distribution of the reimbursed cost of COVID-19 hospital care among payment sources varies across states and over time because of variations in policy and the changing epidemiology of the disease. The greatest source of variation, however, is the different amounts payers reimburse for the hospital care of COVID-19 patients. COVID-19 has had a disproportionate impact on seniors and low-income populations covered by public insurance. Because of these payment rate variations, hospitals that primarily serve these groups have been doubly disadvantaged — they have faced much greater demands for care, while receiving lower reimbursement for the care that they deliver.

The model used to create these estimates was based on projections from the Institute for Health Metrics and Evaluation. The simulation model allows users to set state-specific epidemiological parameters such as high, medium, and low estimates from IHME and to vary utilization and cost parameters such as hospitalization and ICU costs. Our projections describe likely costs from January 1, 2020, through October 31, 2020.