Sens. Raphael Warnock and Jon Ossoff (both D–Ga.) walk toward the House Chamber in Statuary Hall of the U.S. Capitol. Along with Sen. Tammy Baldwin (D–Wis.), they introduced the Medicaid Saves Lives Act to establish a federally administered Medicaid program for residents of nonexpansion states. Photo: Sarah Silbiger-Pool via Getty Images

In 2012, the United States Supreme Court ruled that the Affordable Care Act’s (ACA) Medicaid expansion was an unenforceable mandate. Currently, a dozen states have yet to expand. However, after a ruling by its state Supreme Court finding a voter initiative to establish expansion lawful, Missouri is now expected to join the expansion states. The federal government currently provides a 90/10 funding match to expansion states; the American Rescue Plan (ARP) will provide additional funding.

But for residents in states that have not expanded Medicaid, relief may come in the $3.5 trillion budget package that is expected to follow the infrastructure bill. A federally funded “fallback” option would extend help to millions but could take various forms. This post examines some of those options.

Federally administered Medicaid program for residents of nonexpansion states. Senators Raphael Warnock (D–Ga.), Jon Ossoff (D–Ga.), and Tammy Baldwin (D–Wis.) have introduced the Medicaid Saves Lives Act (MSLA). This would direct the Secretary of Health and Human Services (HHS) to establish a federally funded program for working-age adults who fall within the ACA Medicaid eligibility group (i.e., those with incomes up to 138 percent of the federal poverty level and not otherwise eligible for Medicaid) who live in states that have not expanded Medicaid. This would include the ACA expansion group. The bill also emphasizes that, consistent with the 2012 Supreme Court decision, it establishes no “state mandate.”

The bill dramatically expands the American Rescue Plan’s expansion bonus. The ARP created a new temporary (eight calendar quarters) sweetener for nonexpansion states, raising the federal share of their state Medicaid expenditures by a full 5 percentage points — for example, in a state with a federal match of 65 percent, the match would go to 70 percent during the temporary period. The MSLA would double this incentive, to 10 percentage points, while quintupling the temporary enhancement period to 40 calendar quarters. In addition to bonus payments, newly expanding states would receive the same permanent 90 percent enhanced federal matching rate for their expansion population that all expansion states receive.

Our table shows how much states would gain under this increase, compared to the ARP, in federal Medicaid funding, beginning in January 2022. The ARP would invest $17.6 billion; under MSLA the investment would skyrocket to nearly $225 billion over the bonus period. If Texas expands, payments will rise from $4.6 billion under the ARP to $58 billion over the bonus period. Wisconsin’s potential bonus would increase from slightly less than $1.1 billion to nearly $14 billion. Payments to Georgia would rise to more than $16 billion compared to under $1.3 billion. Prior research found that the ARP expansion incentive, which would last for eight quarters, would exceed the 10 percent state share for the expansion population. It is thus safe to assume that the MSLA 40-quarter expansion bonus would dramatically exceed states’ costs. 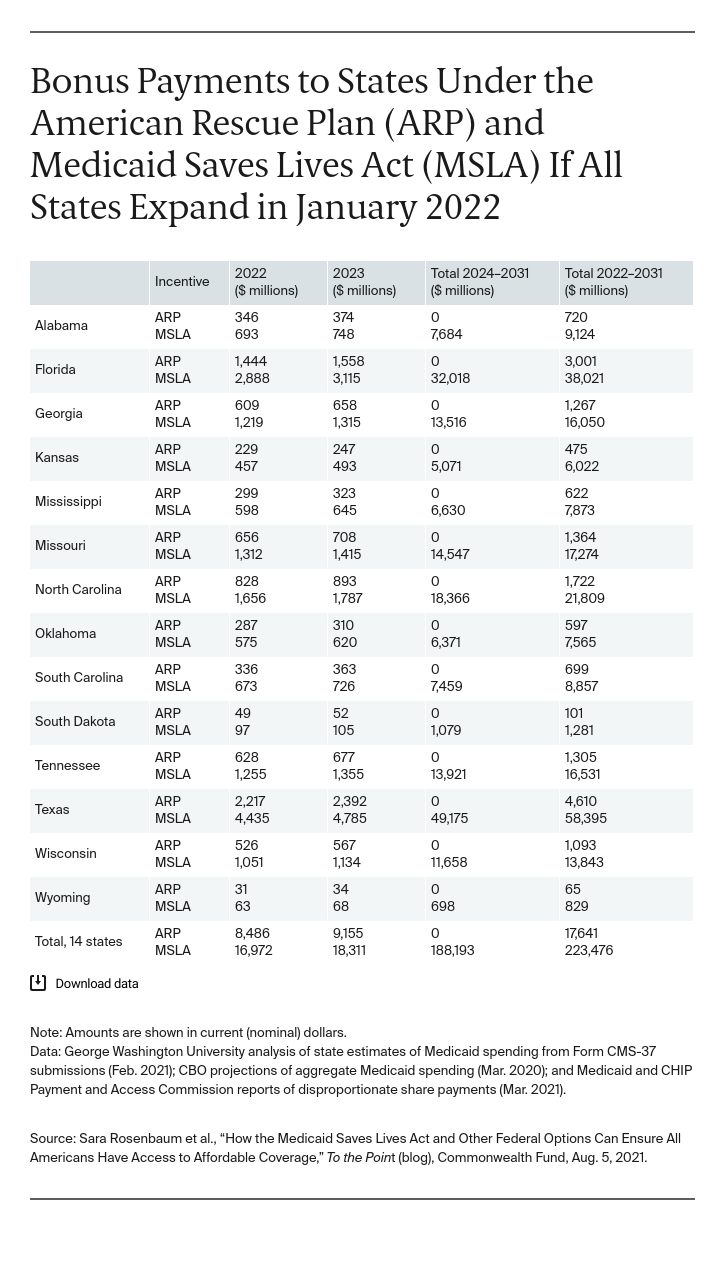 Universal federal public option for everyone who needs affordable insurance. During his candidacy, President Biden recommended a federal public option open to all people who need affordable coverage, with premium and cost-sharing assistance for low- and moderate-income people, similar to subsidized qualified health plans sold in the health insurance marketplace. This option could take the form of a federally administered insurance plan universally available through the marketplace.

Expanding access to subsidized marketplace plans in nonexpansion states. A third option, which effectively would build on the ARP’s marketplace subsidy expansions, would broaden access to subsidies in nonexpansion states by extending subsidies to the poorest residents. This approach would correct a basic shortcoming of the ACA, which barred subsidies for people with below-poverty income on the assumption they would be covered by Medicaid. After the Supreme Court’s decision, the ACA’s threshold point for transitioning between Medicaid and marketplace subsidies (138% of poverty) became the entry point into the subsidy system and is a barrier for nonexpansion-state residents without Medicaid. This option would drop the premium subsidy threshold to zero income, meaning that people with minimal or no income could qualify for premium support. This could be coupled with expanded cost-sharing assistance to make health care fully affordable. In combination, these two reforms could give the poorest residents in nonexpansion states access to affordable plans offering the essential health benefit package. Congress also could add certain benefits found in Medicaid but not in qualified health plans, like nonemergency transportation and vision, dental, and hearing coverage for people ages 18 to 21.

These options are not mutually exclusive. For example, during the time needed to establish a new federal Medicaid program, lawmakers could provide interim relief through expanded access to marketplace plans. It will be important to consider costs. Medicaid costs less per capita than marketplace plans, but the funding enhancements for voluntary expansion in the MSLA could raise the overall cost of a Medicaid expansion considerably. The efficiency of using the established marketplace versus creating a new federal program is another important factor. Policymakers also must consider the scope and quality of coverage, since Medicaid offers protections not found in the private market, such as enrollment when care is needed, coverage that begins up to three months before application, and strong consumer protections.

Despite the complexity of any solution, the inequity of leaving millions without coverage eclipses the challenges of fashioning relief.

Sara Rosenbaum et al., “How the Medicaid Saves Lives Act and Other Federal Options Can Ensure All Americans Have Access to Affordable Coverage,” To the Point (blog), Commonwealth Fund, Aug. 5, 2021. https://doi.org/10.26099/wens-xe92