The recently enacted No Surprises Act (NSA) provides landmark protections against surprise billing in a wide range of settings — but not for ground ambulances. At least half of all ambulance rides may result in a surprise bill, with bills averaging $450. Since consumers cannot choose an ambulance service when they dial 911, patients have little ability to avoid out-of-network charges. The NSA created a ground ambulance advisory committee of stakeholders and experts to develop recommendations related to disclosure of charges, surprise-billing protections, and enforcement mechanisms. However, the committee has not selected members nor published a convening date. This post will examine coverage and billing challenges, state actions, and lessons learned from states that could be replicated as the federal advisory committee begins its work.

The variety of ways ground ambulances are operated and paid for creates challenges for states and federal agencies. In 2020, 37 percent of emergency ground ambulance rides were provided through local fire departments, 25 percent through other government agencies, 30 percent through private companies, and 8 percent through hospitals. State and local regulation creates barriers for publicly funded providers, such as local fire departments, to contract with insurance companies as in-network providers. In Houston, for example, ambulance reimbursement rates are set by municipal ordinance, which means rates cannot be lowered during insurer contract negotiations. These rates may be set high to influence Medicare and Medicaid reimbursement, which is based on the average emergency medical service (EMS) rate per region. Some states, like Colorado and Delaware, have chosen to exempt public agencies from protections altogether, meaning that patients who use ambulance services run by a publicly funded provider may receive surprise bills. The complexity of working with local governments was cited as one reason ground ambulance coverage was excluded from the NSA.

Several states have addressed out-of-network protections for ground ambulances. For state-regulated fully insured plans, 10 states provide some protection for consumers from surprise bills by out-of-network ground ambulance services; six provide guidance on reimbursement rates, though some use billed charges as a factor in that guidance, meaning providers can still charge insurers high rates even if the patient is only responsible for in-network cost sharing. High rates, in turn, may contribute to higher premiums for consumers. 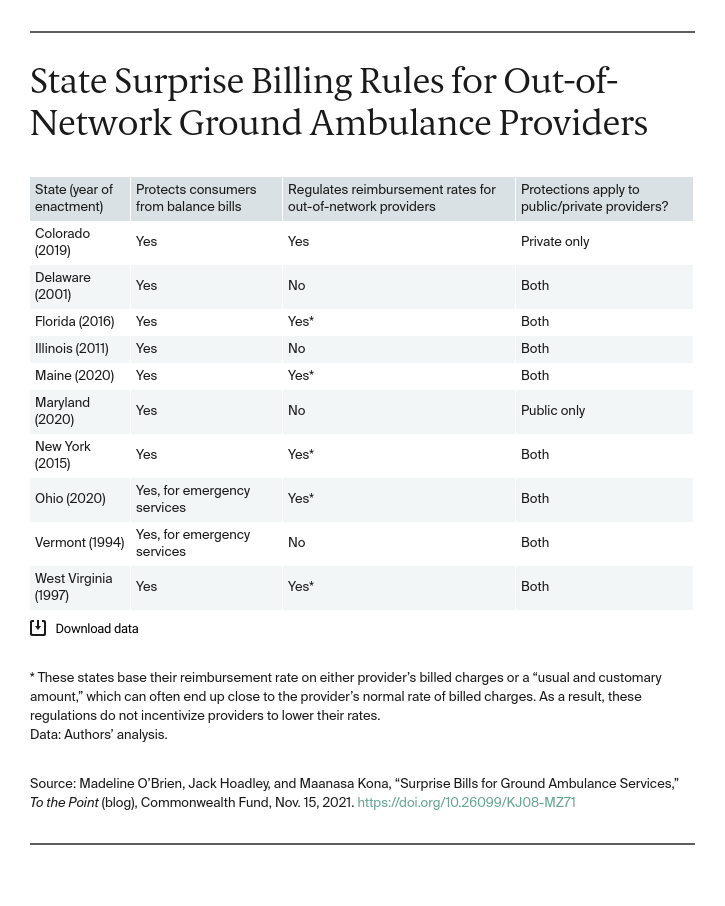 Some states have released data showing the positive impact of reimbursement guidance. In Colorado, aggregate claims data showed that out-of-network ambulance providers charged $21,212,290 statewide, but insurers ultimately paid out only about half that amount, $11,715,373, following reimbursement guidance that capped payments at either 350 percent of Medicare or an independently negotiated amount. In Florida, complaints related to ground ambulance billing have decreased since the passage of surprise billing protection in 2016, falling from 36 percent of complaints in 2015 to 5 percent of complaints in 2020.

Lessons for the Federal Stakeholder Group

Discussions with regulators in Maine and Colorado, which have both prohibited surprise billing by out-of-network ground ambulance providers, provided insight into addressing this issue. Regulators in both states noted that Medicare rates were a good benchmark for starting a discussion on reimbursement levels, because ambulance groups are familiar with Medicare and accustomed to using Medicare rates to determine their payment structure. Still, using Medicare as a starting point does not necessarily result in objectively low rates: Colorado ambulance providers used their leverage to push for a payment rate that is more than triple the Medicare benchmark. If regulators consider Medicare rates as a strong starting point for negotiations, collecting data on ground ambulance costs could help them push for the use of a smaller, more appropriate multiplier of those rates in determining reimbursement. Regulators also should be aware that tying reimbursement rates to Medicare does not guarantee lower rates; they should be prepared for hard bargaining from ambulance companies and open to alternative approaches.

Regulators recommended expanding data collection. For example, they found all-payer claims databases to be valuable for analyzing the landscape of provider types and developing reimbursement methodologies, but said there is still a lack of comprehensive data. The lack of sufficient cost data was also cited as one reason why ground ambulances were excluded from NSA protections. A recent report on the use of out-of-network services in Colorado details the percentage of aggregate provider claims labeled out-of-network and compares total amounts billed with amounts paid across geographic rating areas. This kind of resource could serve as a model for similar data collection at the federal level.

Input from a variety of stakeholders — including insurers and public and private providers — was key to coming to a workable compromise. Both state laws called for regulators to set reimbursement rates, so stakeholders had a strong incentive to come to the table. Maine’s stakeholder subcommittee, created as part of its 2020 surprise billing legislation, was effective at bringing together voices from public and private ambulance companies, health plan representatives, EMS board members, and the Department of Insurance, and the committee agreed to nine key recommendations that were published in February 2021. Legislation that passed in 2021 adopted the committee’s recommendations related to standard contracting, phased reimbursement, cost reporting, adjudication of out-of-network claims, and the creation of a stakeholder group focused on financial performance.

As the ground ambulance advisory committee begins its work, federal regulators would benefit from broadening NSA data collection requirements to include ground ambulance services, addressing the unique challenges connected to publicly funded ambulance agencies, and soliciting stakeholder input from across the industry.