The Medicare Hospital Insurance (HI) Trust Fund, which pays for Medicare beneficiaries’ hospital bills and other services, is projected to become insolvent in 2028. Without changes to expected spending or trust fund revenue, the trust fund will not have sufficient funds to cover the entire cost of beneficiaries’ health care. The HI trust fund is primarily funded through payroll taxes paid by employers and employees, with some additional income from interest as well as premiums paid by voluntary enrollees not automatically entitled to Medicare Part A. Will the trust fund solvency be extended by reducing the projected growth in expenditures, raising revenues, changes to the services covered by Medicare Part A, or a combination of these options? 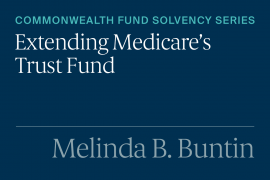 The projected exhaustion of the Medicare Hospital Trust Fund in 2024 presents an opportunity for policymakers to modernize the program, expanding its best features and shrinking the parts of the program that don’t serve beneficiaries well. The traditional fee-for-service (FFS) Medicare program is antiquated and does not serve its enrollees well because it fails to provide the administrative flexibility and financial incentives necessary to coordinate care, improve delivery of primary care, and control the costs of treating serious illness. It lacks basic financial protections that are common in private plans. Despite a long history of payment and delivery reform demonstration projects in Medicare, the projects have generally failed to save money or substantially improve quality of care.

To modernize Medicare, realign economic incentives, and expand the role of private plans, Medicare could be transformed into a premium support program. Beneficiaries would choose a plan each year and the federal contribution would be determined by the second-lowest bid from all plans. As they do now, beneficiaries would still choose between private Medicare Advantage (MA) plans or the FFS program. However, the method for defining the benchmark that determines the federal contribution toward premiums would change. Instead of defining the benchmark based on spending growth in the FFS program, the benchmark would be defined by the second-lowest bid. Competition among plans to be the second-lowest or lowest bidder would encourage plans to keep premiums low and restrain premium growth over time.

The Congressional Budget Office (CBO) estimated that this plan would save $419 billion dollars during five years of operation, from 2022 to 2026. It is estimated to foster greater competition among plans and yield greater savings for the Medicare program than an average-bid approach.1 In most regions, more beneficiaries would switch to private plans because premiums for the FFS option would rise relative to current law. Private plans would compete for enrollment, and higher enrollment would give plans some additional flexibility to restrain premium growth.

The impact of a premium support program would vary by state and region. In areas where there are already many MA plans, it would not change the range of options from which Medicare beneficiaries choose. Given the robust plan competition, however, the premium for the traditional FFS option in these regions might rise more than under current law and more than in regions where there is less competition. Although the premium payment for staying in the FFS program would be higher than current law in some regions, CBO estimates that many beneficiaries would continue to choose the FFS option. On the other hand, in areas without much competition from private MA plans (often rural counties and states), it is possible that the FFS premium would define the benchmark and the choice of plans and premiums would not differ much from current law.

MA plans are able to negotiate provider payment rates that are very close to Medicare payment rates and much lower than commercial payment rates due to a provision in the Social Security Act (SSA) that prohibits out-of-network providers from charging more than Medicare FFS payment rates to treat Medicare beneficiaries. To achieve the projected savings from this proposal, it would be necessary to keep the provision in place along with the Medicare fee schedule in order to enforce the SSA provision. Thus, in addition to offering choices to beneficiaries, retaining the traditional FFS program would ensure a regularly updated Medicare fee schedule remains in effect.

Expanding the role of MA in the overall Medicare program would modernize cost-sharing and benefits for enrollees and rationalize the payment for and delivery of medical care. MA plans combine benefits for Medicare Parts A and B and usually include additional benefits for routine dental, vision, and/or hearing care. Deductibles and copayments are smaller than in FFS Medicare and, in addition, MA plans typically include a maximum on out-of-pocket spending, protecting enrollees from high costs.

Another benefit of this proposal is that it would promote enrollment in managed care plans which offer better coordination of care and other improvements in the delivery of primary care that are possible under capitated payment models. Currently, more than half of MA enrollment is in such health maintenance organization plans.2

A premium support program is also expected to have long-term effects that would shape demand for new health care technology and favor cost-saving innovations over cost-increasing.