Reforms to Make All of Medicare Financially Sound 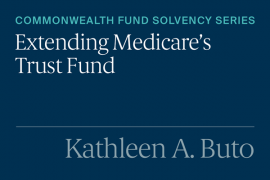 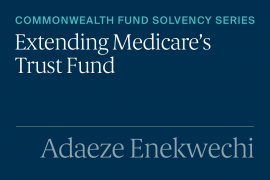 Any Medicare Solvency Effort Must Include Advancing Health Equity

It no longer makes sense to have two separate insurance plans for Medicare — one for inpatient services (Part A) and one for ambulatory care (Part B) — supported by separate trust funds. Decisions on where and how care is delivered to patients should be based on best practices, not insurance design and payment issues.

Congress should modernize Medicare and integrate benefits covering hospital and outpatient costs with a simplified cost sharing structure for patients. Beneficiary cost sharing should be adjusted so the government’s cost on a per-person basis is equal to current law. The switch would be mandatory for new enrollees and optional for current beneficiaries.

A companion reform would combine the program’s two trust funds. The revenue sources would remain the same, except that general fund payments to cover Medicare’s costs would be indexed in future years to a predetermined measure not tied to Medicare’s costs. (Today, general fund payments go to supplementary insurance and are set to cover roughly 75% of that trust fund’s annual expenses.) One option would be to tie payments in future years to a measure of economic growth. It would increase budgetary pressure on the program but is essential for ensuring policymakers focus on the right goal, which is to keep Medicare’s overall costs across generations in line with realistic levels of federal taxation.

The most important reform for long-term cost control is an improved structure for premium competition and beneficiary choice.

Today, Medicare beneficiaries can choose to enroll in a private Medicare Advantage (MA) plan or get benefits through the traditional fee-for-service (FFS) program. People in FFS can be assigned to an accountable care organization (ACO) that operates much like a provider-run managed care plan.

These three coverage pathways — MA plans, ACOs, and unmanaged FFS — should compete for beneficiary enrollment based on premiums. The benefits should be actuarially equivalent for standard coverage so beneficiaries can clearly see the price differences among plans. The government’s contribution should be based on bids submitted by the competing offerings, weighted by the distribution of enrollment in the previous year. The FFS bid could be calculated by Medicare actuaries based on expected costs. The government’s contribution should not change based on the plan selected by each beneficiary.

ACOs would need to transition into provider-driven plans that can compete directly with MA offerings. ACOs could contract with insurers to assist with functions that would otherwise require expensive in-house investments.

The Congressional Budget Office (CBO) has estimated that premium support would reduce Medicare’s federal costs by 8 percent, which would equate to $390 billion of expected HI spending and nearly $1 trillion for all of Medicare over 10 years. The reform could be modified to limit the potential premium increases for beneficiaries enrolled in expensive plan options and still achieve substantial savings over a decade.

Prescription drug coverage — which already operates on a system of premium support — would not change, except that MA plans would be required to offer both standard coverage without a drug benefit as well as full coverage that includes prescription drugs.

Beneficiaries should enroll in these plans using the same coverage enrollment process as their Medicare benefits. MA plans could offer supplemental coverage (beyond the actuarially equivalent benefits already required for Parts A, B, and D) for a fixed additional premium. ACOs could contract with privately administered supplemental plans and allow their enrollees to pay a premium for lower cost sharing.

For unmanaged FFS, beneficiaries should pay some cost sharing when using outpatient services. Implementing this policy will require prohibiting supplemental plans, including those sponsored by employers, from offering coverage to Medicare beneficiaries that eliminate patient cost sharing altogether. CBO has estimated a comparable proposal that would reduce overall Medicare costs by $72 billion over a decade.

Reference Pricing and Competitive Bidding. The Medicare program should build upon bundled payment demonstrations by moving toward reference pricing. Instead of the government establishing a payment amount based on previous regulations, groups of providers would submit bids covering all necessary services related to a procedure. The government could use those bids to establish a benchmark for payment. Research based on the health plan market for California’s state employees and retirees shows the savings would be substantial.

Congress should expand the reach of reference pricing to any aspect of Medicare coverage that lends itself to competitive bidding. When applied to high-volume procedures (e.g., joint replacement surgery), reference pricing has reduced costs by nearly 20 percent. With the right combination of shared-savings incentives, beneficiaries can benefit financially with lower out-of-pocket costs, even as Medicare’s costs would also fall by up to 12 percent if the reform applied broadly to all services amenable to consumer price comparisons.

Reform of Graduate Medical Education Payments. Medicare provides funding to hospitals to offset residency training expenses for physician candidates. The Medicare Payment Advisory Commission has estimated that the payments made under current law — about $10 billion annually — exceed the costs incurred by roughly $3 billion. Further, these payments appear to have little effect on the number of residency slots available annually or on residency salaries.

Congress should reform Medicare graduate medical education payments by converting the payments into direct grants to institutions sponsoring residency training programs; allowing ambulatory care settings such as physician groups to receive funding for sponsoring residencies; and cutting the total amount of spending by $3 billion annually for savings of $30 billion over a decade.