A pedestrian crosses Orleans Street near the Johns Hopkins Hospital complex in Maryland, a state which has led an inaugural effort for "Easy Enrollment" programs to get more uninsured people health insurance. Photo: Washington Post via Getty Images

The American Rescue Plan (ARP) made health insurance more affordable for more Americans. Since mid-February, when the Biden administration and state-based marketplaces established a new enrollment opportunity, more than 2 million people have signed up for marketplace coverage, with most enrolling after the ARP’s temporary subsidy expansions took effect.

Covering the 30 million remaining uninsured — including some of the most difficult to reach and underserved Americans — will require innovative efforts to broadcast the availability of subsidized insurance and facilitate enrollment. To that end, several states, following an inaugural effort in Maryland, have proposed or are implementing “Easy Enrollment” programs. While such programs will not cover all of the uninsured, they may be key to enrolling more people, including populations that disproportionately lack coverage.

Maryland Leverages the Tax-Filing Process to Enroll the Uninsured

Maryland’s Easy Enrollment program, implemented last year, uses the state tax-filing process as a pathway to coverage. On their tax forms, Marylanders can choose to share their insurance status, income, and other relevant information to receive an eligibility determination for Medicaid and subsidized marketplace plans. The marketplace notifies these taxpayers of their eligibility for coverage and, if applicable, offers them the opportunity to enroll in a marketplace plan outside of the open-enrollment period.

Maryland recently released enrollment data for the first year of the program.

Data: Authors’ analysis of Maryland marketplace workgroup presentation from March 24, 2021, and Open Enrollment Report from a January 19, 2021, marketplace board meeting.

Though enrollment increases in this initial year were modest, the program produced important gains among populations that make up a disproportionate share of the uninsured. The Maryland marketplace is discussing how to increase the impact of the program in future years using follow-up messages and consumer assistance efforts.

Maryland’s program has become a blueprint for other states. 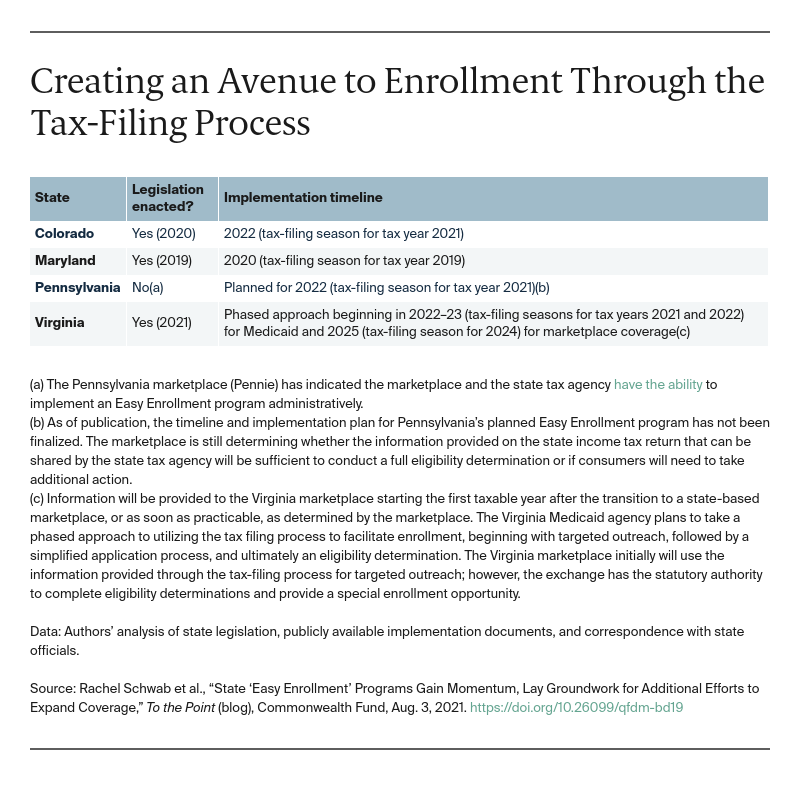 Several other states have considered creating processes to streamline and encourage enrollment. Legislation to create an Easy Enrollment program is still pending in Maine and New Jersey, and New Mexico considered a proposal during its 2021 legislative session. Massachusetts enacted legislation this year requiring the marketplace to conduct targeted outreach based on information from tax filers who consent to sharing their income information. A bill pending in California would facilitate outreach by allowing the marketplace to receive information on residents filing for unemployment, disability, paid family leave, and other programs and to help them enroll in coverage.

Easy Enrollment programs could offer a bridge to more ambitious initiatives, such as automatic enrollment in health insurance at the state level. Autoenrollment has been touted as an innovative way to expand coverage; it is likely to improve the health of the individual health insurance market risk pool, reduce premiums, and prevent gaps in coverage. For these reasons, it has appeared in various policy proposals, including public-option plans.

Both Maryland’s new law and New Jersey’s pending legislation include provisions to automatically enroll Medicaid-eligible taxpayers in Medicaid managed care organizations, giving them the opportunity to select a different plan or opt out. The Colorado marketplace has floated its forthcoming Easy Enrollment program as a way to implement autoenrollment, and Colorado’s enacted legislation and Maine’s pending bill both include directives to study its feasibility. California will launch a program next year that automatically enrolls those who lose their eligibility for the state’s Medicaid program into marketplace plans.

Despite the enthusiasm for autoenrolling the uninsured, it may be a difficult task to accomplish. Maryland’s early experience has revealed several roadblocks, including verification of income and citizenship status. Policymakers in Maryland are considering legislative fixes and seeking flexibility from the federal government on certain enrollment procedures, including citizenship attestation. In the meantime, Maryland plans to use the program to populate enrollment applications with information from residents’ tax forms. Experts also have emphasized relief from reconciliation of advance premium tax credits as an important element of autoenrollment, which would require federal policy action.

Expanding the Reach of Programs Through the Unemployment Filing Process

States also are looking to build on Easy Enrollment programs by expanding the process beyond tax filing. Maryland enacted and New Jersey is considering legislation to allow unemployment claimants to share information with the marketplace and state Medicaid agency to receive an eligibility determination and enrollment opportunity. Colorado also has looked at unemployment filings as a way to identify the uninsured and facilitate enrollment. In addition to California’s pending proposal to provide unemployment recipients’ information to the marketplace, Washington State has discussed improving outreach to the newly, or seasonally, unemployed through closer collaboration between the marketplace and the state unemployment agency.

Lack of awareness of health insurance coverage options and premium assistance among the uninsured has long been a barrier to enrollment and continues to pose a challenge even after the ARP’s temporary subsidy expansion. Easy Enrollment programs help state officials pinpoint the uninsured and streamline their path to coverage. While not a silver bullet, states’ experiences suggest these programs are important tools for reducing coverage disparities.