More than half of all pregnancy-related deaths are preventable, with many occurring weeks or months after a birth. Going without postpartum coverage places low-income birthing people at risk and can exacerbate disparities. Medicaid can play an essential role in addressing this crisis. Nearly half of all births are financed by Medicaid; the proportion is even greater for people of color.

While coverage expansion alone is not sufficient to improve outcomes, it is a critical part of the equation. Without coverage, few people have the resources to finance needed health services, particularly higher-cost items like maternity care. Other key considerations include addressing the impacts of structural racism, ensuring delivery of high-quality health care services, investing in community-based organizations, and building a more diverse perinatal workforce.

Ensuring birthing people have continuous health coverage for one year postpartum can reduce maternal mortality and morbidity. For more than 35 years, federal law has guaranteed automatic coverage for babies born to Medicaid-enrolled mothers, starting at birth and continuing uninterrupted through the first year of life. Thus, while many birthing people lose Medicaid coverage at 60 days postpartum, their babies have continued coverage for a year. Adopting 12 months of continuous Medicaid eligibility for both birthing people and infants would result in fewer coverage gaps and less paperwork for state agencies and health plans. Automatic and continuous enrollment is important for maximizing preventive care, responding to serious conditions, and preventing deaths. Some common chronic conditions — including hypertension, diabetes, or heart disease — place pregnant people at higher risk of complications both during pregnancy and in the year postpartum. Losing Medicaid coverage intensifies that risk. A few states have taken steps to extend Medicaid postpartum coverage. The American Rescue Plan Act (ARP) created a streamlined path forward, giving states the option to expand coverage using a state plan amendment (SPA). 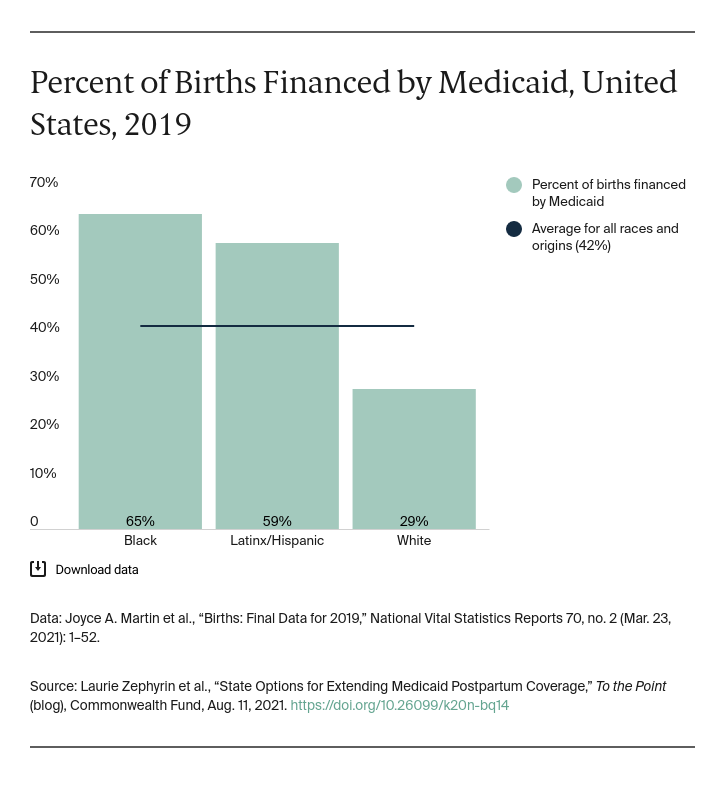 For decades, states have used Medicaid Section 1115 demonstration waivers to expand coverage, modify delivery systems, and adopt alternative financing structures. Prior to the ARP, states had to use waivers to extend postpartum coverage beyond 60 days, and several states included postpartum provisions as part of Section 1115 demonstration waiver requests. In April 2021, federal approval was given for waiver proposals from Illinois, Georgia (limited to six months of coverage), and Missouri (limited to substance use disorder treatment). Additional states have waivers pending or have plans to submit waivers.

Although states can still seek a waiver, the ARP allows states to use an SPA, beginning in 2022. There are key distinctions between a waiver and an SPA. For most states seeking to expand postpartum coverage, an SPA would have advantages in terms of funding, federal approval process, and administrative simplicity. For birthing people, an SPA would typically have advantages in terms of eligibility, covered benefits, and provider choice.

While the waiver process can be used to offer comprehensive postpartum coverage, some states’ proposals have set limitations on populations or benefits covered. In the ARP, the option to use an SPA to extend postpartum coverage to one year offers full Medicaid benefits, with more people covered over a longer time period. Important distinctions between the waiver and SPA approaches include:

As states wait for the Centers for Medicare and Medicaid Services to release guidance on the SPA postpartum coverage option later this year, policymakers can act. Some states pursuing an SPA will require legislative authority and be constrained by the timing of legislative sessions. Others will need budgetary authority. Still others may need time to adjust contracts with managed care organizations, accountable care organizations, or other plans and providers.

For most states seeking to expand postpartum coverage, an SPA would have advantages in terms of funding and administrative simplicity. An estimated 123,000 uninsured birthing persons could benefit from such expansions, reducing the risk that they might forgo needed care, leaving health conditions untreated and risking maternal complications. The more states that adopt this option, the more likely Congress may decide to make this permanent for all birthing people on Medicaid.