The Supreme Court is scheduled to hear arguments on November 29 in Becerra v. Empire Health Foundation. In this case, the Empire Health Foundation, created with funds set aside when the nonprofit Valley Hospital Medical Center was sold to a for-profit company, challenged a U.S. Department of Health and Human Services (HHS) rule established in 2004 that reinterpreted how Medicare calculates disproportionate share hospital (DSH) payments. DSH payments increase reimbursement for inpatient care to hospitals that serve a large number of low-income patients.

Medicare paid out more than $4 billion in DSH adjustments in fiscal year 2020. If a hospital qualifies for Medicare DSH payments, it also may have access to the federal uncompensated care pool, worth $8.35 billion in fiscal year 2020, and drug discounts through the 340B program, which account for 8 percent of drug purchases.

DSH payments are calculated using two components, often called the Medicare fraction and the Medicaid fraction. The Medicare fraction measures the share of inpatient hospitals days during which a patient is entitled to both Medicare Part A and supplemental security income (SSI) benefits. The Medicaid fraction measures the share of a hospital’s total inpatient care days for patients who are eligible for Medicaid but not entitled to Medicare Part A benefits. The sum of these fractions is called the Medicare Disproportionate Patient Percentage (DPP). If a hospital’s DPP is 15 percent or more, it is eligible for DSH payments. 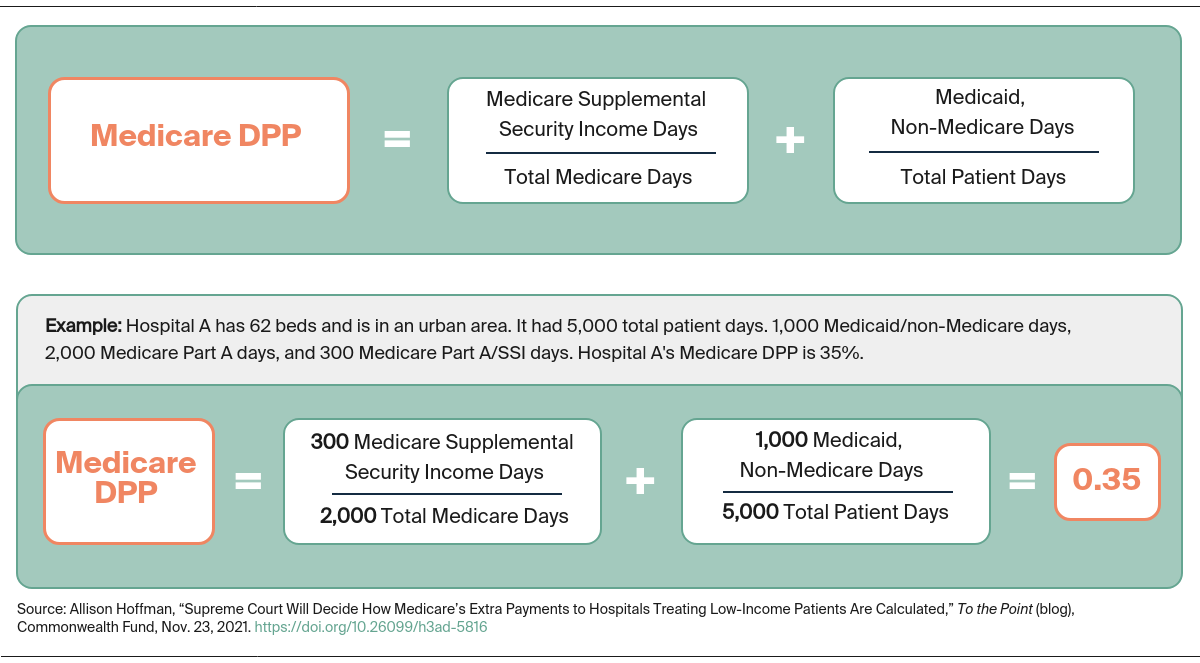 Hospitals Mount a Legal Challenge to the 2004 Rule

The case concerns a rule finalized in 2004 that changed how days of inpatient care are counted for someone who remains in the hospital after using up Medicare Part A inpatient care benefits. Before the 2004 rule, these days were not included in DSH calculations; only patient days covered by Medicare Part A were included. The 2004 rule included these days of additional care in the Medicare fraction. This change increased the denominator. It also increased the numerator for some hospitals when those additional days of care were for Medicare patients also entitled to SSI. Many hospitals will see lower DSH payments under this rule, but some could benefit.

Empire challenged the rule on substantive and procedural grounds. Procedurally, Empire argued that the rulemaking process was flawed because HHS failed to allow adequate time for comments on the rule before it was finalized. Substantively, it argued that the Secretary’s interpretation of how to calculate inpatient days for someone who had exhausted Medicare inpatient care benefits was inconsistent with the plain language of the Medicare statute.

The Ninth Circuit decision voided the rule based on the substantive arguments, relying on an earlier Ninth Circuit case’s discussion of the meaning of “entitled to” Medicare Part A benefits versus “eligible for” Medicaid. In that case, the court assumed that Congress used two different words because it intended different meanings, namely that “entitled” conveyed that a patient’s care was covered under the Medicare program and “eligible” conveyed the broader meaning that someone qualified for the Medicaid program on the date of care. By this logic, patients who have used up their Medicare inpatient care benefit are no longer entitled to Medicare payment for additional days and their additional inpatient days should not be counted in the Medicare fraction, in contrast to the 2004 rule.

The case could quell some future disputes, at least over the Medicare part of the DSH fraction, and could affect how courts interpret the language “entitled” elsewhere in the Medicare statute if it arises in future litigation. It also allows the Supreme Court to consider how much deference should be provided to agencies in setting payments.

If the hospitals prevail, CMS will be required to change the methodology for calculating DSH payments. What is unclear is whether it will attempt to return to the pre-2004 policy of not counting exhausted days at all or instead count exhausted days for dual-eligible patients in the Medicaid fraction. This latter approach would increase the DPP for nearly all hospitals since it will increase the numerator of that fraction without changing the denominator.

If HHS prevails, some hospitals will continue to receive lower DSH payments than they would have under the pre-2004 rule. Safety-net hospitals, which serve the most low-income Medicare beneficiaries who are entitled to SSI and have the fewest financial resources, may feel less impact.

Defining the two DSH fractions has long been contentious and litigated, with billions of dollars at stake for hospitals and CMS. With this case, the Supreme Court will have the opportunity to settle at least one aspect of the DSH calculation debate.