Under federal and state law, insurers must cover gender-affirming care — including medically necessary mental health care, hormone therapy, and surgical treatments — for transgender people. But many transgender people continue to face discriminatory barriers accessing this care. In Colorado, state officials requested — and the U.S. Department of Health and Human Services (HHS) approved — a change to the state’s essential health benefits (EHB) benchmark marketplace plan to affirm and clarify insurer coverage of gender-affirming care. Plans must comply beginning in 2023. This blog post reviews the status of insurer coverage for gender-affirming care, improvements made in transgender health under the Affordable Care Act (ACA), and Colorado’s announcement.

What Is Gender-Affirming Care?

Like all people, transgender people need preventive care to stay healthy and acute care when they are sick. This can include services, such as prostate exams or mammograms, which are traditionally associated with one gender, but which transgender individuals may need even when their insurance records reflect a different gender. Transgender people also may need access to medically necessary care related to gender transition to treat a medical condition known as gender dysphoria (formerly known as gender identity disorder).

“Gender-affirming care” or “transition-related care” refers to a range of services used to treat gender dysphoria and may include mental health care, hormone therapy, and a variety of possible surgical treatments. The World Professional Association for Transgender Health has long maintained a set of evidence-based standards of care for transgender people.

The medical services associated with gender-affirming care are not needed only by transgender people. The same hormone therapy used for transgender patients, for example, is provided to patients with endocrine disorders and menopausal symptoms. The surgical procedures that may be used in gender transition, such as a hysterectomy, are regularly covered by insurance companies for non-transgender individuals for treating injuries or for cancer treatment or prevention.

Coverage of gender-affirming care is highly cost-effective. The California Department of Insurance compared the costs and benefits of California’s law that prohibited insurance discrimination against transgender people and found an “immaterial” impact on premium costs and that “the benefits of eliminating discrimination far exceed the insignificant costs” because of improved health outcomes for transgender people, including reduced suicide risk, lower rates of substance use, and increased adherence to HIV treatment regimens. Other studies have similarly found zero or very low costs associated with the coverage of gender-affirming care.

The estimated 1.4 million transgender adults in the United States have faced numerous barriers to accessing health insurance coverage and health care. Before 2014, many transgender people were denied coverage altogether because being transgender, or seeking treatment for gender dysphoria, was considered a preexisting condition. Gender dysphoria is a medical diagnosis for someone who experiences distress because the gender they are thought to be at birth does not align with the gender they know themselves to be.

For transgender people who could enroll and afford coverage, insurance plans regularly included broad “transgender exclusions” — that is, plan language that explicitly excludes coverage for gender-affirming care. Many of these exclusions date to the early 1980s, when Medicare began excluding gender-affirming surgeries.1

Transgender people face this discrimination even though it is the overwhelming consensus among medical experts that gender-affirming care is medically necessary, effective, and safe when clinically indicated to alleviate gender dysphoria.

Improvements Under the Affordable Care Act

Access to health insurance undoubtedly improved under the Affordable Care Act (ACA). The uninsured rate among low- and middle-income transgender people dropped from 59 percent in 2013 to 25 percent in 2017. There also has been a documented decline in the use of broad transgender exclusions over time.

An annual analysis from Out2Enroll shows that most insurers that offer silver marketplace plans through HealthCare.gov did not incorporate transgender exclusions in their individual market plans beginning with the 2017 plan year. This was the first year that Obama-era rules barred such categorical transgender exclusions from many private plans. 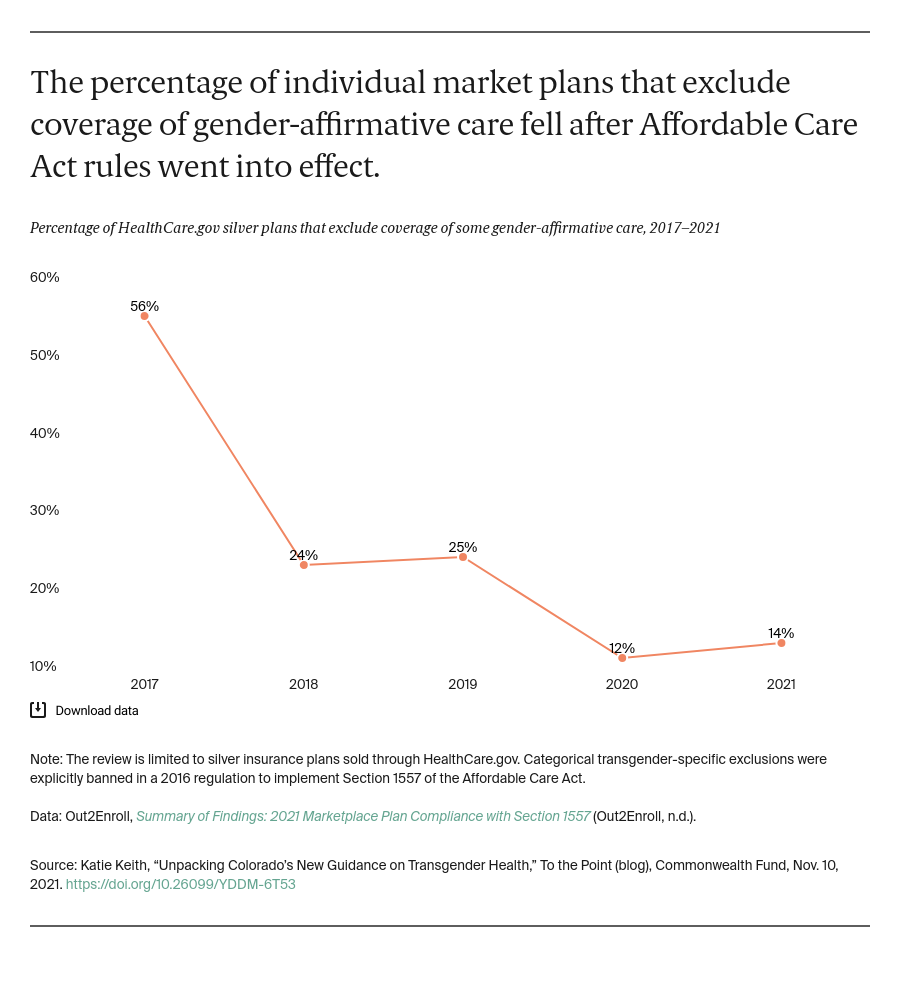 There also has been a documented increase in the inclusion of plan language that explicitly confirms that some or all medically necessary treatment for gender dysphoria is covered. For 2021, nearly half of HealthCare.gov insurers incorporated this affirmative coverage language, up from 18 percent in 2017.

Affirmative coverage language is critical to helping ensure that transgender people can access the care they are entitled to and appeal a claims denial, if needed. But this language varies significantly by insurer, and insurers might continue to restrict care through other policies (such as narrow definitions of medical necessity) that discriminate in practice. When used to restrict care in a manner that discriminates against transgender consumers, these practices violate federal law. Ensuring fully equal, nondiscriminatory coverage of medically necessary treatment for gender dysphoria would require eliminating these gaps.

Despite some remaining gaps, coverage has improved significantly as a result of the ACA, and there is continued momentum for the coverage of gender-affirming care in other types of plans as well. To date, 24 states and the District of Columbia, including Colorado, have additionally prohibited transgender exclusions in state-regulated health insurance. Private sector employers and state Medicaid programs are also adopting clear policies to affirm transgender-inclusive coverage.

What Does Colorado’s Recent Announcement Mean?

To help address the barriers that many transgender people continue to face, Colorado amended its marketplace EHB benchmark plan to provide greater clarity on how insurers should cover gender-affirming care. Under the ACA, insurers in the individual and small-group markets must cover 10 categories of EHB. HHS gave states flexibility to choose from among existing health plans to identify the benefit benchmark and specify the details of what must be covered in each category.

In updating its EHB benchmark plan, Colorado affirmed that insurers were already required to cover gender-affirming care, but made changes to reflect the need to be more explicit, more comprehensive, and less variable. This additional clarity is expected to increase access to care for transgender enrollees. Colorado also made other changes to its benchmark plan that will benefit transgender people and other Coloradans; for instance, requiring coverage of an annual mental health wellness exam. These changes will apply to ACA coverage in the individual and small-group markets beginning in 2023.

In the meantime, more changes are expected. HHS is rewriting new regulations that will formally interpret the ACA to bar discrimination based on gender identity. Additional guidance on nondiscriminatory coverage of gender-affirming care may be included in that rule.

1 Medicare’s exclusion was eliminated in 2014 after the HHS Departmental Appeals Board concluded that sex reassignment surgery “is safe and effective and not experimental,” “has gained broad acceptance in the medical community,” and “is an effective treatment option.” See Departmental Appeals Board, NCD 140.3, Transsexual Surgery, Decision No. 2576 (2014). As a result, the Board concluded that it is unreasonable to categorically deny such care to transgender people, and medically necessary gender-affirming care is now available to Medicare beneficiaries.