After a multiyear hiatus, the federal government has signaled it will soon resume oversight of marketplace health plans’ provider networks. While federal law has always required coverage sold through the Affordable Care Act’s (ACA) marketplaces to have an adequate network — one that is sufficient in number and types of providers to assure enrollees have timely access to needed care and services — the Trump administration erased federal network adequacy standards and stopped enforcing the protection. Though the Biden administration concluded there wasn’t enough time to introduce a federal network adequacy framework for plans being developed for sale in 2022, it recently proposed new federal minimum network standards and compliance procedures for insurers offering coverage through the marketplaces in 2023.

States have long regulated the provider networks of private health plans, but how they’ve done so — the content of their rules, the products to which those rules have applied (e.g., HMOs, PPOs), and states’ capacity to ensure compliance — has varied widely. Against this backdrop, the ACA established a minimum federal standard for network adequacy, entitling all marketplace enrollees, regardless of state, to timely access to the providers they need.

The Obama administration initially interpreted the ACA requirement quite flexibly and only gradually implemented concrete federal standards (and then, only for plans sold on HealthCare.gov). This slow rollout was intended to give the states and the National Association of Insurance Commissioners (NAIC) — a standard-setting and regulatory support organization comprising state insurance regulators — more time to reassess and strengthen their approaches to network oversight. In late 2015, the NAIC finished revising its decades-old network adequacy model state law and urged states to adopt the new version promptly.

As it turns out, few did. To date, just four states have revised their network rules to match the model; a handful more have updated their approaches in other ways. Yet despite only modest state movement on the issue, the Trump administration abruptly eliminated federal network adequacy requirements and halted health plan oversight. These decisions spawned a lawsuit, culminating in a federal court order invalidating the Trump administration’s approach and requiring the federal government to revisit its network adequacy policy.

To that end, the Biden administration has proposed to begin evaluating the networks of plans sold through HealthCare.gov against specific quantitative measures of adequacy. The proposed rule would establish travel “time and distance” standards for more than 40 provider specialties and facilities, as well as limits on appointment wait times for behavioral health services, routine primary care, and nonurgent specialty visits. For example, plans serving a large metro county would be required to ensure that at least 90 percent of enrollees have reasonable access to a primary care provider within five miles or 10 minutes. Access to outpatient behavioral health providers would be subject to a similar standard. The aim of the new framework is to provide clear expectations for stakeholders and the public about the minimum level of access that networks must deliver, and to facilitate consistent and objective oversight across insurers.

While this new approach may prove to be significant, it’s hardly radical. Federal regulators assess Medicare Advantage (MA) plans similarly. The numeric standards the administration has proposed are similar to (though generally more extensive than) those most states have already established for their individual markets. At the time the marketplaces launched, about half of states required at least some plans (e.g., marketplace HMOs) to meet at least one quantitative measure of network adequacy. Since then, the prevalence of quantitative standards has marginally increased. Thirty states have now adopted at least one such metric. Time and distance criteria apply in 29 states; wait time standards in at least 15. 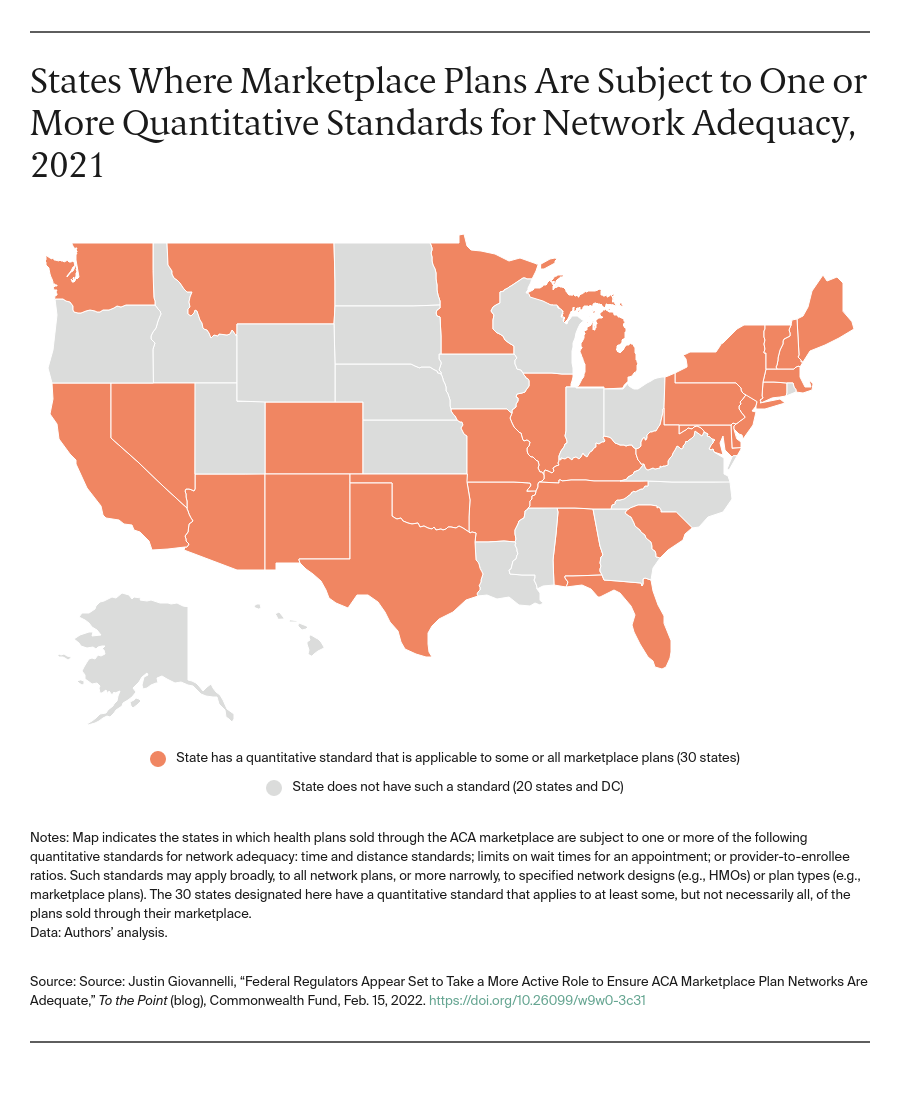 Setting standards is one thing; ensuring compliance, another. Traditionally, most states didn’t even attempt to test PPOs or other products with broader networks against adequacy standards; scrutiny of HMOs was more common. Oversight frequently has consisted of relying on an initial attestation of compliance by the insurer and monitoring for complaints.

In contrast, some states require insurers to submit specific network data and information annually and to update those submissions whenever the composition of their networks changes. These filings must affirmatively demonstrate compliance with quantitative and other standards and facilitate regulators’ independent evaluation of network sufficiency. To learn whether networks are performing as promised, consumer advocates have asked regulators to go further and obtain and analyze data on out-of-network utilization and claim denial rates, and test provider availability for themselves.

It appears the Biden administration intends for network oversight to be more proactive. Under its proposed framework, regulators will evaluate compliance with time and distance standards before they certify a plan for sale. While regulators won’t review appointment wait times prior to certification, the proposed rule suggests regulators may test whether plans are complying through random sampling.

Reinvigorating federal network adequacy regulation will be a multiyear project. The proposed rule seeks input on methods to collect and analyze claims data for oversight and signals the administration’s interest in designing network adequacy standards to improve health equity. It’s not alone on this front. Colorado recently proposed rules explicitly intended to make networks more equitable and culturally responsive, while the NAIC is studying the issue.

In a first, the proposal also asks whether federal regulators should pursue “a more coordinated, national approach to network adequacy rules across all exchanges,” state-run marketplaces included. This approach is consistent with precedents: MA enrollees in all states benefit from federal network adequacy rules and, new in 2022, federal minimum standards protect consumers nationwide against surprise medical bills. More important, it’s wholly in keeping with the statute: the ACA created a federal network adequacy protection for all marketplace enrollees. It may be time for federal minimum standards for all marketplace plan networks.