The Role of the Affordable Care Act Marketplaces

A pedestrian walks past the Leading Insurance Agency, which offers plans under the Affordable Care Act (ACA), on Jan. 28, 2021, in Miami, Fla. As the end of the public health emergency looms, many are at risk of losing health coverage. Advocates and government officials are primarily focused on the preparedness of Medicaid agencies, but the ACA marketplaces will serve as a critical safety net. Photo: Joe Raedle via Getty Images

In January 2020, the federal government declared a public health emergency (PHE) because of the emerging COVID-19 virus. The government has extended the PHE nine times since, and it is now scheduled to expire in mid-July 2022. Many may celebrate the symbolic end of the pandemic, but the end of the PHE could dramatically reverse recent gains the United States has made in reducing the numbers of uninsured. While the PHE is in effect, state Medicaid programs receive enhanced federal funding as long as they do not drop people from the program. At the end of the PHE, this enhanced federal funding will end and states will resume eligibility redeterminations for the more than 78 million people enrolled in Medicaid and the Children’s Health Insurance Program; as many as 16 million are expected to lose Medicaid coverage as a result.1

The Families First Coronavirus Response Act (FFCRA), enacted on March 18, 2020, gave states a 6.2 percent increase in the federal share of Medicaid financing for the duration of the PHE. In exchange, states were prohibited from dropping people from the program or limiting eligibility. (All states have accepted the enhanced federal funds.) Subsequent federal guidance has provided states with up to 14 months after the end of the PHE to complete the necessary Medicaid eligibility redeterminations and renewals, but they must conduct a fresh review of eligibility for each beneficiary.

Providing a Soft Landing: The Role of Marketplaces

As the end of the PHE looms, advocates and government officials are primarily focused on the preparedness of Medicaid agencies, but the Affordable Care Act (ACA) marketplaces will serve as a critical safety net. An estimated one-third of adults who lose Medicaid will be eligible for subsidized coverage through the marketplaces. But whether people understand the coverage options available, apply for premium tax credits, enroll in, and ultimately use their new coverage will depend largely on marketplace officials.

In most states, once the state Medicaid agency finds people no longer eligible, it transfers them to the marketplace. Then, the marketplace contacts those individuals and invites them to complete an application for a marketplace plan. To successfully transition to new coverage, the consumer must complete a number of steps within a limited, 60-day special-enrollment period. 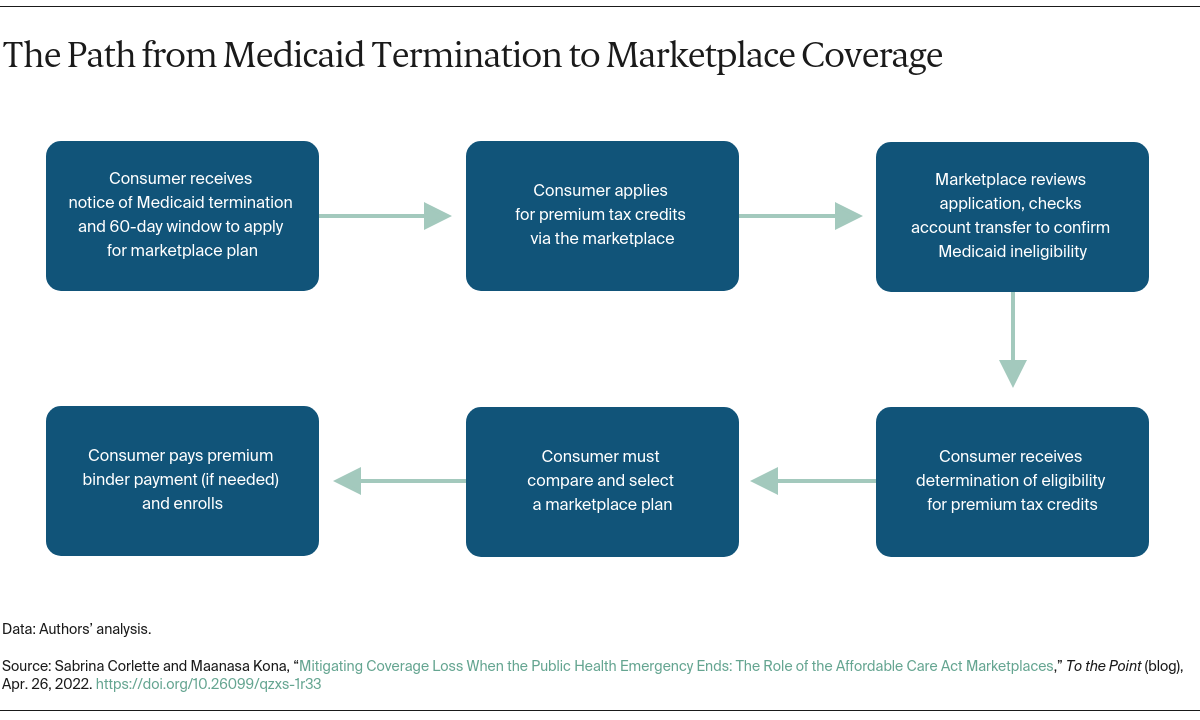 The complexity of the application and enrollment process can mean that consumers fall through the cracks. One study found that only 5 percent of individuals terminated from Medicaid successfully enroll in marketplace plans. However, several of the 18 state-based marketplaces (SBMs) have integrated their Medicaid and marketplace eligibility and enrollment systems and may be able to provide a more streamlined experience.

Marketplaces, both federal and state-run, can play a critical communications role before and after the end of the PHE. Unlike most Medicaid agencies, the marketplaces have marketing budgets and work with navigators and brokers who understand how to “sell” the importance of insurance. These resources can be leveraged to educate Medicaid enrollees about the importance of renewing coverage if they’re still eligible and can help those terminated understand their options through the marketplace. New York’s marketplace, for instance, is using a PHE-focused communications campaign to help educate Medicaid enrollees about how to maintain coverage.

State officials face considerable uncertainty. No one yet knows when the PHE will end, and many state Medicaid agencies have not yet decided on the timeline and process by which they will resume eligibility redeterminations and renewals. This makes planning for this unprecedented transition in coverage difficult. However, there are several steps the marketplaces can take now to prepare.

The marketplace can use its call center and consumer assistance workforces to contact individuals terminated from Medicaid and provide information about coverage options. Simply reminding people of the need to apply for new coverage — and the limited time window for doing so — has been shown to increase enrollment numbers. This will be particularly important for Black and Latino/a enrollees, who are disproportionately affected by Medicaid terminations. At the same time, the marketplaces need to prepare for an increase in incoming consumer calls and requests for assistance. Massachusetts, for example, increased its 2022 navigator budget in anticipation of the increased demand for assistance.

There is considerable evidence that the time and effort required for consumers to apply for and select health plans serve as barriers to enrollment. California’s SBM, Covered California, will soon roll out a program to automatically enroll individuals who lose Medicaid coverage into zero-premium marketplace plans, although people must consent to enrollment. Massachusetts and Rhode Island are exploring similar programs. There are other strategies to streamline the transition process, short of full autoenrollment, including using internal and external data sources to prepopulate consumers’ applications and conducting preliminary eligibility determinations.

The end of the public health emergency and Medicaid’s continuous coverage requirement pose tremendous challenges for federal and state-level officials. Historic gains in health insurance coverage could quickly be wiped out. However, early planning, coordination between Medicaid and the marketplaces, investments in communications and consumer support infrastructure, and greater automation of the eligibility and enrollment process could significantly reduce that risk.