What Are the Economic and Employment Consequences of Phasing Down Medicaid Enrollment After the Public Health Emergency Ends?

A “Help Wanted” sign is posted beside coronavirus safety guidelines in front of a restaurant in Los Angeles, Calif., on May 28, 2021. Declining Medicaid caseloads and health funding would lead to lower health care employment. These losses would reverberate through state economies, triggering lower employment in other sectors including construction, retail, and finance. Photo by Frederic J. Brown/AFP via Getty Images

The Families First Coronavirus Response Act of 2020 temporarily increased federal matching funds for state Medicaid programs during the COVID-19 Public Health Emergency (PHE) in exchange for a requirement that states suspend redeterminations of enrollees’ eligibility. This paused Medicaid disenrollment for the duration of the PHE and increased the number of people covered. The redetermination process often results in loss of coverage because of paperwork barriers, not just income changes. The pandemic policy had the effect of stabilizing overall health insurance coverage despite massive job losses and increases in poverty.

Unless current law is modified, Medicaid enrollment could decline rapidly when the PHE ends, which is now set for April 16. The Urban Institute projected that if the PHE had expired at the end of 2021, Medicaid enrollment could fall by almost 15 million people within six months as states resume eligibility redeterminations. This would erase nearly all the gains in Medicaid coverage that have occurred since the pandemic began.

Build Back Better (BBB) legislation passed by the U.S. House of Representatives sought to slow declines in Medicaid enrollment after the PHE ends by gradually phasing out federal matching funds for states and establishing disenrollment standards: states may redetermine eligibility for only one-twelfth of participants each month. The legislation also would expand eligibility for health insurance marketplaces for poor adults in states that have not expanded eligibility for Medicaid. Another version of the BBB Act was introduced in the U.S. Senate but stalled. It would similarly phase down enrollment.

This analysis uses the Urban Institute’s estimates of Medicaid enrollment reductions to project the likely economic and employment effects if the enrollment decline proceeds at a rapid vs. gradual pace. Our analysis compares the impact of:

These estimates assumed caseload reductions began in January 2022, but the effects would be similar if disenrollment begins this spring. Economic and employment impact are based on an economic model we used previously to estimate the effects of Medicaid expansion. 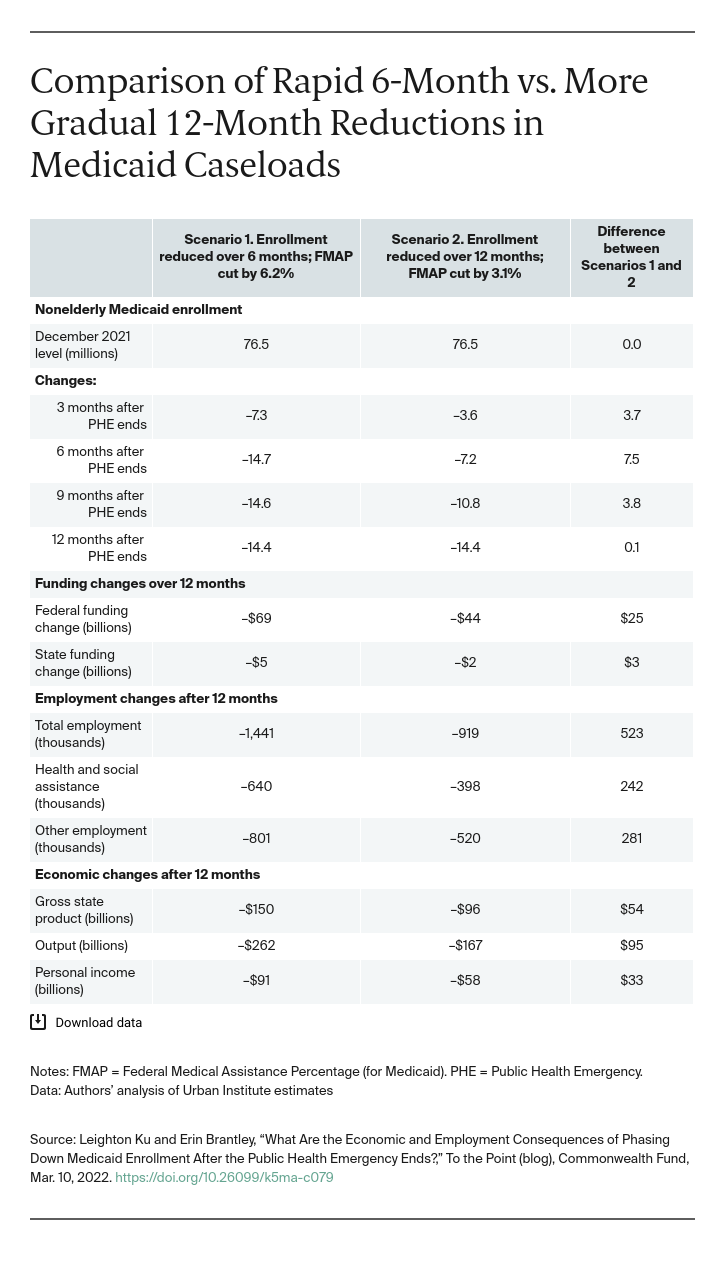 Medicaid Enrollment. If there were a gradual, 12-month reduction in enrollment, about 7.5 million more people would retain coverage six months after the PHE ends. While under both the rapid and gradual scenarios, about 14 million fewer people would be eventually be enrolled, the reductions would be less precipitous under the gradual pathway. Under the gradual path, at the six-month point, about 700,000 more people retain Medicaid coverage in each of California and Texas, more than 500,000 would retain coverage in New York, more than 200,000 each in Arizona, Georgia, and Kentucky, and 45,000 more in West Virginia. The gradual phase-down gives people more time to find other coverage through health insurance marketplaces, the Children’s Health Insurance Program (CHIP), or job-based insurance.

Federal and State Health Care Funding. Under both scenarios, lower Medicaid enrollment would cause federal and state Medicaid expenditures to fall. Because of the more gradual decline under the 12-month scenario, states would earn $25 billion more in federal matching funds. In 2022, overall state Medicaid expenditures would fall by $5.3 billion in the rapid scenario vs. $1.9 billion in the gradual scenario.

State Employment and Economies. Declining Medicaid caseloads and health funding would lead to lower health care employment. Since people would have less money to spend, these losses would reverberate through state economies, triggering lower employment in other sectors including construction, retail, and finance. Under the rapid scenario, national employment would fall by 1.44 million in 12 months, including 640,000 jobs in health and social assistance. The gradual scenario would trigger the loss of 919,000 jobs, including 398,000 in health and social assistance. This would mean a difference of 523,000 fewer jobs lost during the first year. This includes over 50,000 fewer jobs lost in each of California and Texas and about 10,000 fewer jobs lost in Arizona and Kentucky.

The maintenance-of-eligibility policy has bolstered Medicaid and overall health insurance enrollment during the pandemic and has had positive ramifications for state economies and employment. After the PHE ends, more than 14 million people could lose coverage. Extending the transition period to 12 months and providing transitional federal funding support to states substantially eases the impact, allowing low-income people who lose Medicaid more time to find private insurance alternatives and reducing the harm to state economies and employment. Recent guidance allows states to take up to 14 months to reassess eligibility, but without BBB or something similar, there is no requirement for states to move slowly. And if federal matching support expires, as it would under current law, states would face greater pressure to reduce enrollment quickly. Losses could be higher than estimated if states mishandle eligibility processing. Medicaid agencies and the U.S. Department of Health and Human Services should be careful in redetermining eligibility, coordinating “warm handoffs” to facilitate transitions to health insurance marketplaces, CHIP, and job-based insurance and monitoring enrollment losses. Slowing the pace of Medicaid caseload reductions is an important policy to protect insurance coverage and employment in the 12 months that follow the expiration of the Public Health Emergency.

See the appendix for five tables with state-by-state estimates of projected changes in Medicaid enrollment, federal and state health insurance funding levels, employment levels, and gross state product after the Public Health Emergency expires, as well as a summary of methods for these analyses.

Leighton Ku and Erin Brantley, “What Are the Economic and Employment Consequences of Phasing Down Medicaid Enrollment After the Public Health Emergency Ends?,” To the Point (blog), Commonwealth Fund, Mar. 14, 2022. https://doi.org/10.26099/k5ma-c079