New York, NY, July 7, 2016—The Affordable Care Act’s subsidies have made health insurance premium costs in the marketplaces more affordable for lower-income enrollees and nearly comparable to costs in employer-sponsored health plans, according to a new report from The Commonwealth Fund. Sixty-six percent of marketplace enrollees with annual incomes under $30,000 reported paying either nothing or less than $125 a month for individual coverage, compared to 60 percent of people in employer plans.

However, for enrollees with higher incomes, the phaseout of the marketplace tax credits means health care costs are greater compared to those in employer plans. Fifty-eight percent of marketplace enrollees with incomes above $30,000 paid more than $125 in monthly premiums compared to 34 percent of people with employer coverage, most of whom receive premium contributions from their companies regardless of income level. 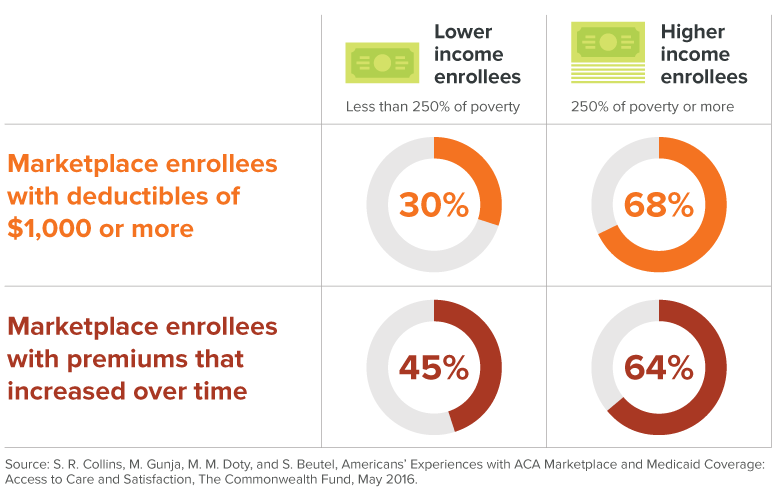 Americans’ Experiences with ACA Marketplace Coverage: Affordability and Provider Network Satisfaction, a new brief based on The Commonwealth Fund Affordable Care Act (ACA) Tracking Survey, February – April 2016, finds differences in the cost and cost protection that marketplace plans provide, depending on enrollees’ incomes. Under the health care law, marketplace enrollees living under 250 percent of the federal poverty level (just under $30,000 for a single person) are eligible for the most generous subsidies. But enrollees earning above that level, up to $47,000 annually, qualify for smaller tax credits and may face higher cost-sharing. Those with higher incomes pay the full premium for their coverage.

Because of the phaseout of subsidies as incomes climb, marketplace enrollees with lower incomes are less likely to have per-person deductibles of $1,000 or more compared to higher-income enrollees (30% vs. 68%). And while less than half (45%) of lower-income adults with marketplace coverage reported their premiums had grown over time, about two-thirds (64%) of higher-income adults reported paying increasing premiums.

“Affording health care remains a top concern for consumers,” said Sara R. Collins, Vice President for Health Care Coverage and Access at The Commonwealth Fund and one of the study’s coauthors. “The survey findings suggest that the law’s premium subsidies have been effective for people with lower and moderate incomes, who have been most at risk of being uninsured. We know from prior surveys that people are also getting the health care they need and using their insurance to get care they wouldn’t have been able to get before.”

Other key findings from the report:

The authors note that for next year’s marketplace open enrollment period, it is likely that marketplace premium increases on average will be higher in 2017 than in 2016. The majority of enrollees have subsidies that will help shield them from paying the full premium increase. And consumers are also likely to shop for better deals, as they did in 2016. Still, efforts are needed to ensure that marketplace plans and health care are affordable over time.

“The Affordable Care Act was designed to ensure all Americans have access to affordable and comprehensive health insurance so they can get the health care they need,” said Commonwealth Fund President David Blumenthal, M.D. “This survey shows that we will need to continue to monitor the affordability of marketplaces, especially as health care costs continue to rise and incomes remain flat.”