New York, NY, May 12, 2016—Out-of-pocket costs such as copayments and deductibles rose moderately in Affordable Care Act (ACA) marketplace plans between 2015 and 2016, for the more than 40 percent of enrollees who are not receiving cost-sharing subsidies, according to a new Commonwealth Fund study. While the law reduces cost-sharing for low-income people enrolled in silver plans, people with annual incomes over about $30,000 have plans without these subsidies.

The study found that cost-sharing in gold-level marketplace plans was on average about the same as in employer plans. However, employer plans have fewer mechanisms in place to protect consumers from rising out-of-pocket costs.

In Changes in Cost-Sharing for Health Plans Sold in the ACA’s Insurance Marketplaces, 2015 to 2016, Jon Gabel and colleagues at NORC at the University of Chicago examined deductibles, copayments, coinsurance, and out-of-pocket limits (i.e., the annual cap on what enrollees would have to spend on their health care) in plans offered in ACA marketplaces across 49 states and Washington, D.C. They compared these findings with cost-sharing in employer-based plans in 2015. 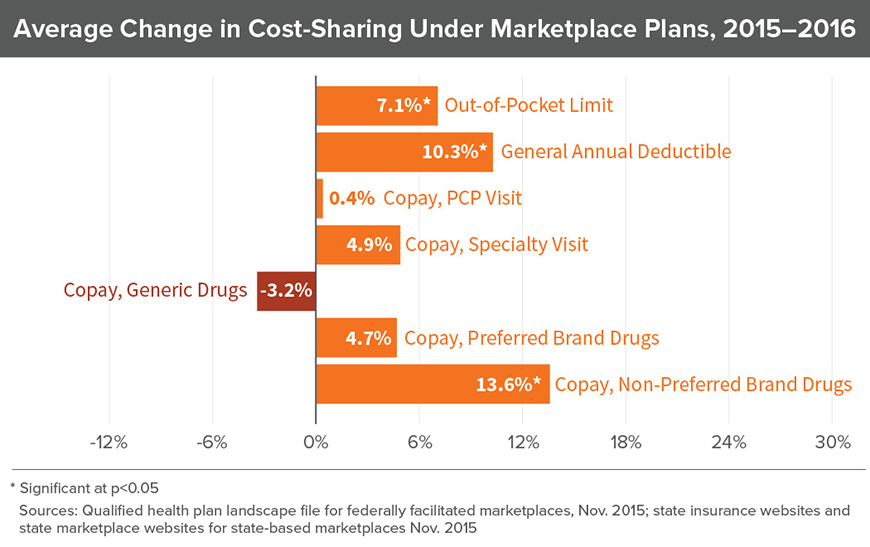 The authors found that cost-sharing increased overall in the marketplaces in 2016 for out-of-pocket limits, annual deductibles, and brand-name drugs not included in a plan’s list of preferred prescriptions. However, copayments for primary care office visits remained constant, copayments for generic drugs declined by more than 3 percent, and there was little change in the percentage of plans that require enrollees to meet a deductible before it begins paying for drugs and office visits.

“Affordability of health care is a top concern for consumers,” said Sara Collins, Vice President for Health Care Coverage and Access at The Commonwealth Fund. “More than 40 percent of people buying plans in the Affordable Care Act marketplaces don’t qualify for plans with reduced cost-sharing, so it is important that we track people’s cost-sharing obligations and the effect they have on their ability to get the care they need.”

The average copayment for primary care visits under marketplaces plans was $29, comparable to the average copayment of $24 under employer-based plans. While most marketplace plans require a copayment for primary care, a larger number of employer-based plans are using coinsurance. Coinsurance requires patients to assume greater financial risk for the cost of care, often obligating patients to pay 20 percent of the cost.

The authors note that as medical care expenses continue to rise, consumers are likely to be more protected from rising out-of-pocket costs in the ACA marketplaces than in employer-based insurance. That’s because marketplace plans must maintain a constant actuarial value (for example, 70 percent of medical costs for silver plans), while employer-based plans do not have such requirements, other than a minimum standard. Over the past 15 years, there has been an increase in lower-valued, high-deductible plans offered by employers, and this trend is expected to continue.

“It is certainly promising that cost-sharing only increased moderately in marketplace plans this year. However, health care costs will likely continue to rise in the next few years, and many consumers will feel the impact of those increases,” said Commonwealth Fund President David Blumenthal, M.D. “The financial protections the Affordable Care Act provides for those buying plans on the marketplaces will help assure people can continue to afford the health care they need. But more work is needed to lower growth in medical costs overall.”