New Commonwealth Fund Report: Latinos and People with Low Incomes Are Most Likely to Be Uninsured, Despite Significant Gains Under Affordable Care Act

New York, NY—Of the U.S. adult population currently without health insurance, 88 percent is Latino, makes less than $16, 243 a year, is under age 35, and/or works for a small business, according to new Commonwealth Fund survey findings. Half (51%) of the remaining uninsured live in one of the 20 states that had not yet expanded Medicaid at the time of the survey.

The report, Who Are the Remaining Uninsured and Why Haven’t They Signed Up for Coverage?, finds that an estimated 24 million working-age adults were uninsured between February and April 2016, six years after the initial implementation of the Affordable Care Act (ACA) in 2010. According to the report, as the number of people without health insurance declined by 20 million since the law went into effect, the composition of the uninsured population has changed: white adults now represent a smaller share and Latinos a larger share. 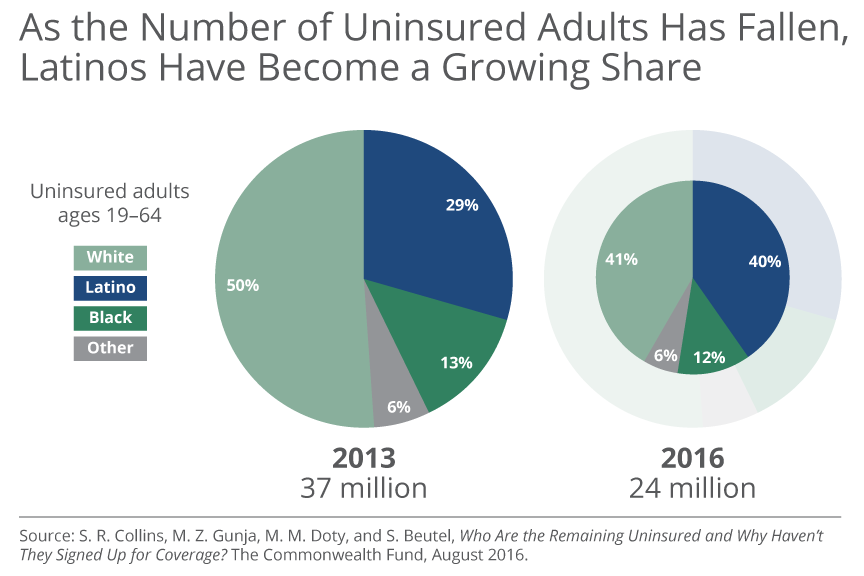 “About 26 million Americans have gained coverage through the Affordable Care Act’s marketplaces and Medicaid expansion,” said Sara Collins, Vice President for Health Care Coverage and Access at The Commonwealth Fund and the report’s lead author. “However, millions of people still don’t have health insurance. That means they are likely to go without the health care they need and are at risk of medical debt or bankruptcy if they get sick.”

The study finds that state and federal policies, varying levels of awareness about the health insurance marketplaces, and concerns about affordability are the primary reasons people remained uninsured. Specifically:

The ACA has expanded health insurance and access to health care for millions of Americans. Ensuring that everyone in the United States receives the full benefits of the law, the report’s authors say, may require additional action:

“The Affordable Care Act was designed to help the United States achieve coverage for all Americans and ensure that everyone can get the health care they need,” said Commonwealth Fund President David Blumenthal, M.D. “The law has been successful in reducing the number of uninsured, but now it is time to make it possible for all to realize its benefits.”