New York, NY, October 26, 2016—Employees’ contributions to their health insurance premiums rose more slowly between 2010 and 2015 in 30 states and Washington, D.C., and their deductibles grew more slowly in 27 states, according to a new Commonwealth Fund state-by-state analysis that compared the cost of employer health insurance between 2006 and 2015. Still, many families are spending, on average, a bigger share of their income on health care than they were prior to 2010. That is because median incomes, despite their recent surge, have not kept pace with health care costs.

The report, The Slowdown in Employer Insurance Cost Growth: Why Many Workers Still Feel the Pinch, found that families spent an average of 10.1 percent ($6,422) of their income on health insurance premiums and deductibles in 2015. But there were differences among states. In Mississippi, which has the lowest median income and among the highest health insurance contribution levels, families were at risk of spending 14.7 percent of their income, on average, on health insurance costs. In Arizona, Florida, Mississippi, New Mexico, Oklahoma, Tennessee, and Texas, families could pay 12 percent or more. Families in the District of Columbia and Massachusetts had the lowest health insurance costs as a share of income, at 6.8 percent and 7.3 percent, respectively.

“The good news is that premiums in employer plans are growing more slowly on average, as is the amount employees are being asked to contribute,” said Sara Collins, Vice President for Health Care Coverage and Access at The Commonwealth Fund and the study’s lead author. “Unfortunately, many employees with moderate incomes aren’t feeling the benefits of these slowdowns, because they haven’t yet experienced the sustained growth in their income needed to keep up with health costs.”

When looking at total premium costs in employer plans—the total cost of coverage to both employer and employee—the researchers found that annual premium growth rates for single policies have slowed down in 33 states and the District of Columbia since 2010. Louisiana experienced the largest slowdown, as average premium growth fell from 7.8 percent a year between 2006 and 2010 to 2.4 percent from 2010 to 2015. However, premiums have continued to grow by 5 percent per year or more in Alaska, Hawaii, Idaho, Kentucky, Maryland, New Hampshire, New York, and Utah. 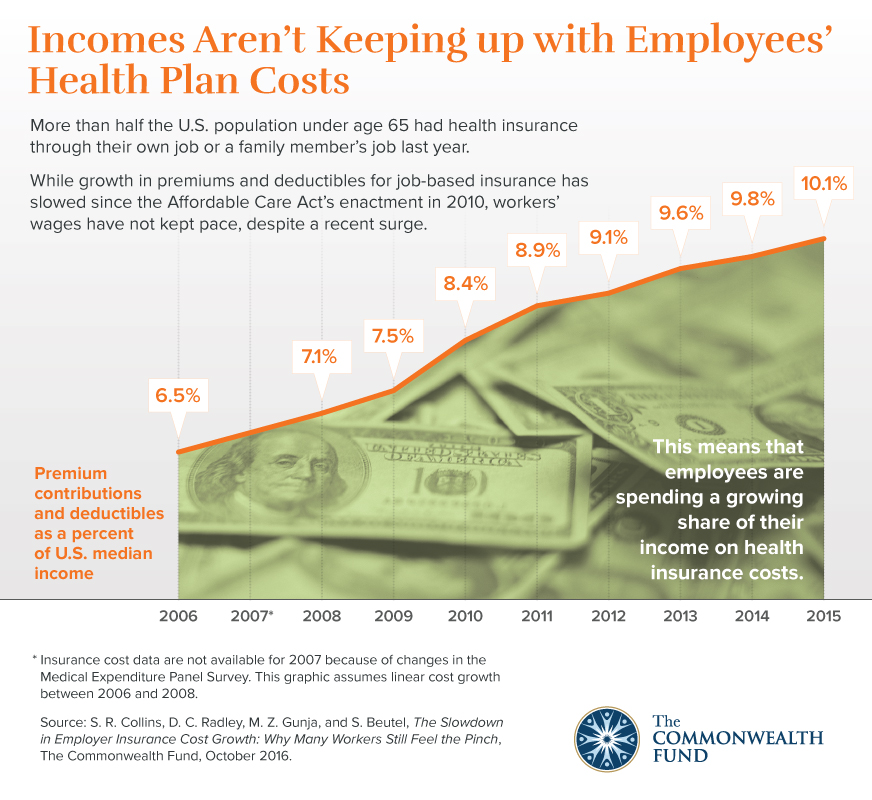 According to the report, employer health insurance premiums for single policies grew an average of 4.7 percent in the years leading up to the ACA’s passage and 3.8 percent in the years following it. The slower growth in employer premiums is in line with the slowdown in overall health care costs that began in 2009, the researchers say. They note, however, that the ACA provisions affecting employer plans—covering preventive care without cost-sharing and allowing young adults to remain on a parent’s plan until age 26—do not appear to have increased employer health insurance premiums and have been absorbed relatively easily by U.S. employers.

The report concludes that while employer premium costs and employee contributions to their health insurance costs have grown more slowly since 2010, many Americans continue to be pinched by their health care costs. Prior Commonwealth Fund research suggests that people living in states with a combination of higher average deductibles and lower median income may be particularly at risk of going without needed care because of costs.

The authors note that additional years of strong income gains will improve families’ ability to afford their health care. And innovation in health plan design to incentivize, rather than discourage, people to get the care they need would also help. Nevertheless, with medical costs being the primary driver of insurance prices, keeping cost of health care in check will be critical to keeping employer premiums and deductibles down.

“The vast majority of people under age 65 in the U.S., 154 million, get their health insurance through an employer, and many of them struggle to pay for it,” said Commonwealth Fund President David Blumenthal, M.D. “It would help if employers designed health plans that help their workers afford timely care. But since employer health insurance costs are driven by overall health care costs, it is also crucial to implement provider payment reform and quality improvement initiatives that keep health care costs down while improving patient outcomes.”