New Commonwealth Fund Survey Finds Uninsured Rates Rose in 2017 for 35-to-49-Year-Olds, People Living in States That Have Not Expanded Medicaid, and People with Higher Incomes

New York, NY, September 7, 2017 — There was a significant uptick in the uninsured rate for people ages 35 to 49, adults making more than 400 percent of the federal poverty level ($47,520 for an individual and $97,200 for a family of four), and those living in states that have not expanded Medicaid, according to a new Commonwealth Fund survey. Policy fixes like expanding Medicaid in all states, making premium subsidies available to more people, and assisting consumers as they shop for coverage on the marketplaces, the report finds, could address some of the barriers the uninsured face in gaining coverage.

According to the Commonwealth Fund’s fifth annual survey tracking the progress of the Affordable Care Act (ACA), despite the uptick in uninsured rates for some groups, the overall rate remained statistically unchanged from 2016 at 14 percent, representing an estimated 27 million working-age adults nationwide. The survey, conducted from March to June 2017, found that 13 million uninsured adults (48% of the uninsured) have incomes that would qualify them for Medicaid or for premium subsidies if they were to buy marketplace coverage. The remaining uninsured include 4 million people with incomes under the federal poverty level, which would qualify them for Medicaid if their state had expanded eligibility; 3 million people whose incomes are too high to qualify for premium subsidies; and 7 million foreign-born Latinos, who may be ineligible for coverage because they are undocumented. 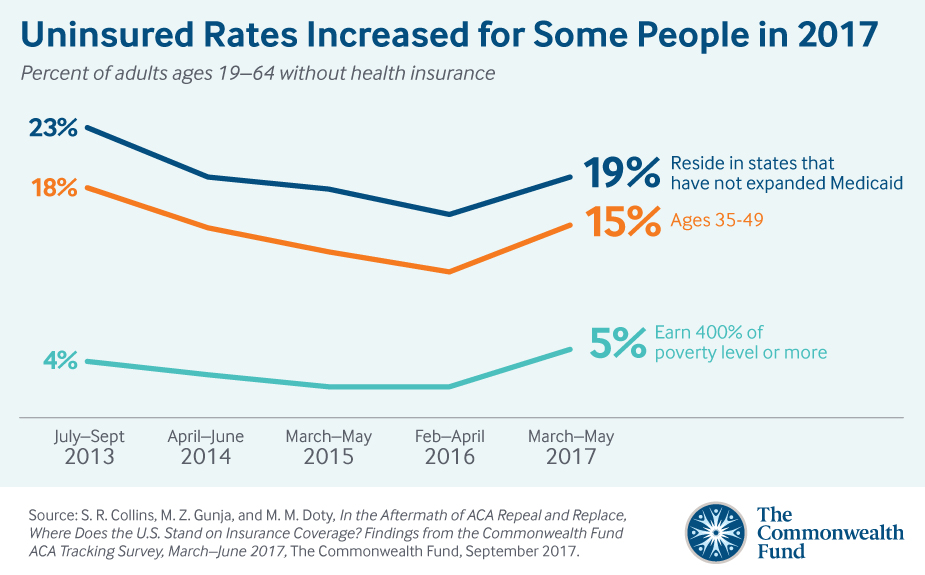 “In the years since the Affordable Care Act was passed, more than 20 million Americans have gained health insurance,” said Sara Collins, Vice President for Health Care Coverage and Access at The Commonwealth Fund and the report’s lead author. “However, there are weak spots in the law that will need to be addressed if we are going to ensure that everyone who is eligible is able to enroll. The good news is that there are several ways to achieve this goal, including expanding Medicaid in all states, making premium subsidies available to more people, and helping people sign up for plans.”

What Will It Take to Get the Remaining Uninsured Covered?

“To achieve a U.S. health care system that ensures everyone can get high-quality, affordable care, we must extend coverage to as many people as possible,” said Commonwealth Fund President David Blumenthal, M.D. “While the ACA has made great strides in driving down the uninsured rate, there are many who still don’t have the security of good health insurance coverage. But there are several potential policy fixes available that make this a largely solvable problem.”

In addition to the experiences of the uninsured, the report looked at consumers’ experience shopping for, enrolling in, and using marketplace health insurance plans. It found that: