New York, NY, August 24 — The disparities in health care access that blacks and Hispanics face compared to whites narrowed between 2013 and 2015, following implementation of the Affordable Care Act’s (ACA) major coverage provisions, according to a new Commonwealth Fund report.

While black and Hispanic adults still experience greater difficulty getting needed health care relative to whites, the historically wide gulf began to shrink after the ACA’s coverage expansions took effect. As a group, states that expanded Medicaid saw, on average, greater declines in racial and ethnic disparities on health care access measures than nonexpansion states did. 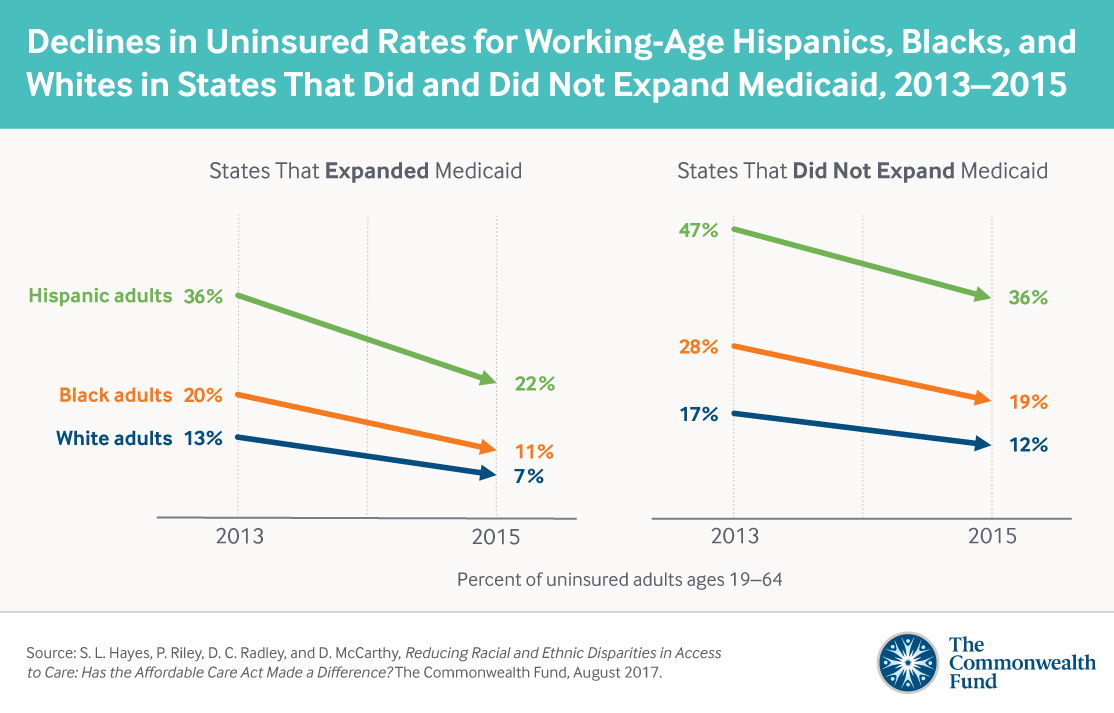 The report, Reducing Racial and Ethnic Disparities in Access to Care: Has the Affordable Care Act Made a Difference?, looks at three key measures of access through the lens of race and ethnicity: not having a regular source of care, not having insurance coverage, and going without needed health care because of cost. The analysis finds that between 2013 and 2015:

"This analysis shows that the Affordable Care Act’s health insurance coverage provisions have helped the U.S. make progress toward ensuring that everyone, regardless of race or ethnicity, has access to the health care they need," said Pamela Riley, M.D., The Commonwealth Fund’s Vice President for Delivery System Reform and a coauthor of the report. "However, blacks and Hispanics are still much more likely than whites to be unable to get the health care they need. If we are going to reduce these disparities, we must continue to focus on policies like expanding eligibility for Medicaid that will address our health care system's historic inequities."

Overall, disparities shrank more between 2013 and 2015 in states that expanded Medicaid than in states that did not expand, especially for Hispanics:

According to the Commonwealth Fund report, blacks and Hispanics across the country made historic gains in their ability to access health care following the Affordable Care Act’s full implementation. Even states that did not expand Medicaid saw improvements, as people gained coverage through the health insurance marketplaces. Between 2013 and 2015, an estimated:

“It’s encouraging to see racial and ethnic disparities in access to health care narrowing,” said Commonwealth Fund President David Blumenthal, M.D. “Improving upon the Affordable Care Act, and expanding Medicaid in all states, will be critical if we are going to see disparities continue to shrink and ensure that everyone can get affordable, high-quality health care.”

Despite the gains blacks and Hispanics have made, they still have a harder time than whites getting the health care they need and are more likely to be uninsured, skip needed health care because of cost, and go without a regular source of care. As Congress debates how to move forward with the Affordable Care Act and its health insurance marketplaces, the report’s authors say that it is important to keep in mind the millions of black and Hispanics for whom access to care improved as a result of the law.