New York, NY, March 22, 2017—After the Affordable Care Act’s (ACA) coverage expansions, people in California and New York—states that expanded Medicaid and created their own health insurance marketplaces—were less likely than people in Florida and Texas to have medical bill problems, more likely to be insured, and better able to afford the health care they needed. The findings are from Insurance Coverage, Access to Care, and Medical Debt Since the ACA: A Look at California, Florida, New York, and Texas, a Commonwealth Fund report out today that compares the health insurance coverage, access, and medical debt experiences of people in California, New York, Florida, and Texas—the nation’s four largest states.

“The striking differences among our biggest states demonstrates how much state health policy decisions affect residents,” said Sara Collins, Vice President for Health Care Coverage and Access at The Commonwealth Fund and coauthor of the report. “Where you live can determine whether or not you have health insurance, if you can afford your medication, and if you can get the health care you need when you’re sick.” 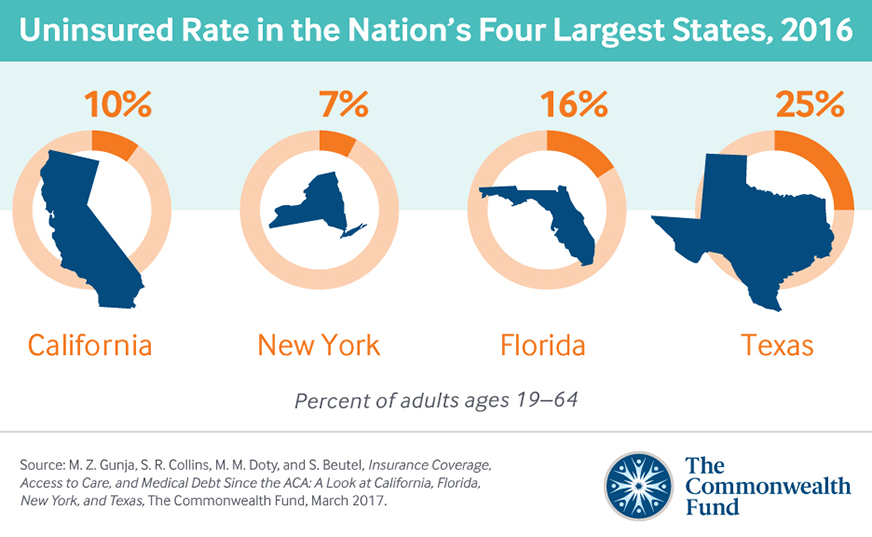 The report compared people’s experiences in 2016 in several areas:

“This report shows that when states embrace policies that make health care and health insurance affordable and accessible, people benefit,” said Commonwealth Fund President David Blumenthal, M.D. “As the Affordable Care Act and Medicaid face an uncertain future, states should take whatever steps they can to hold onto the progress they have made under the ACA and ensure people can get the health care they need.”

The Affordable Care Act’s health insurance expansions have been critical to helping people get and afford the health care they need. However, the authors note it is also important for health insurance plans to be comprehensive and cover the services people need, with deductibles and out-of-pocket expenses they can afford. Any proposal to repeal or replace the ACA, they say, should further expand health insurance coverage and continue to make health care affordable for people in every state.