Underinsured Rate Increased Sharply In 2016; More Than Two Of Five Marketplace Enrollees And A Quarter Of People With Employer Health Insurance Plans Are Now Underinsured

New York, NY, October 18, 2017 — Twenty-eight percent of working-age adults in the United States who had health insurance all year were underinsured in 2016, up from 23 percent in 2014, according to a new Commonwealth Fund report. More than half of the underinsured (52%) had medical bill problems and 45 percent went without needed health care because of cost.

People who are underinsured have high deductibles and high out-of-pocket expenses relative to their income. For lower-income families, this means spending 5 percent or more of income on health care, while for higher-income families it means spending 10 percent or more. While the Affordable Care Act has led to historic gains in coverage, with 20 million fewer people uninsured since the law’s passage, health care costs and premiums continue to rise faster than wages. As a result, employers are requiring workers to share a larger proportion of these costs, especially in the form of higher plan deductibles. More than half (56%) of the estimated 41 million adults who are underinsured get their coverage through an employer.

How Well Does Insurance Coverage Protect Consumers from Health Care Costs?, which is based on findings from the Commonwealth Fund 2016 Biennial Health Insurance Survey, finds that people with all types of health insurance can be underinsured: 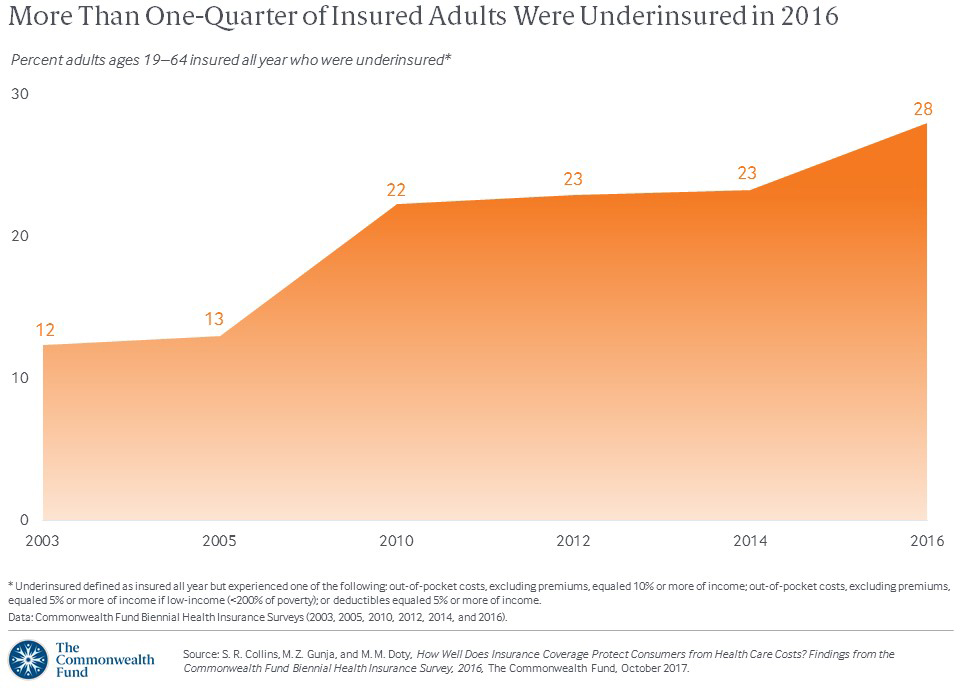 “The growing number of people who are underinsured is concerning, especially because people with the greatest need for affordable health care are most likely to be affected — people with low incomes and people with health problems,” said Sara Collins, Vice President for Health Care Coverage and Access at The Commonwealth Fund and the study’s lead author. “People who are underinsured face problems affording health care at rates similar to those seen for people with no health insurance at all, and they are almost as likely to skip needed care and to end up in debt when they get sick.”

According to the Commonwealth Fund report, underinsurance has risen in part because more people have deductibles, and because deductibles are higher. Specifically, it finds that:

What Can Be Done for Consumers?

Several policy options could help make health care more affordable for consumers, the Commonwealth Fund report finds. These include: extending the Affordable Care Act’s cost-sharing reductions to more enrollees, excluding more services from plan deductibles in both marketplace and employer plans, and increasing the required minimum value of employer plans. The authors note that, in addition to these options, policymakers must address rising health care costs.

“As we move beyond efforts to repeal and replace the Affordable Care Act, it is important to remember that many people, even some with insurance through their employers, still need better access to high-quality, affordable health care,” said Commonwealth Fund President David Blumenthal, M.D. “There are several bipartisan policy fixes that could make a huge difference for people struggling to afford the health care they need, while also making our health system work better for everyone.”