Close to 4 million Americans would gain health insurance, and premium costs would drop an average of nearly 12 percent, if every state joined Massachusetts and New Jersey in enacting state-level individual mandates. These mandates would replace the Affordable Care Act’s (ACA) penalty for not having health insurance, a fee that Congress eliminated, effective 2019. That’s according to a new Commonwealth Fund/Urban Institute report by the Urban Institute’s Linda Blumberg, Matthew Buettgens, and John Holahan examining what would happen if all states adopted their own individual insurance mandates.

The ACA requires most Americans to enroll in an insurance plan or pay a financial penalty — a move intended to stabilize insurance markets by encouraging healthy people to purchase and stay enrolled in a health plan. Now that the mandate penalty will be eliminated as of January 2019, the Congressional Budget Office predicts that premiums will increase and more people will lose their insurance coverage. 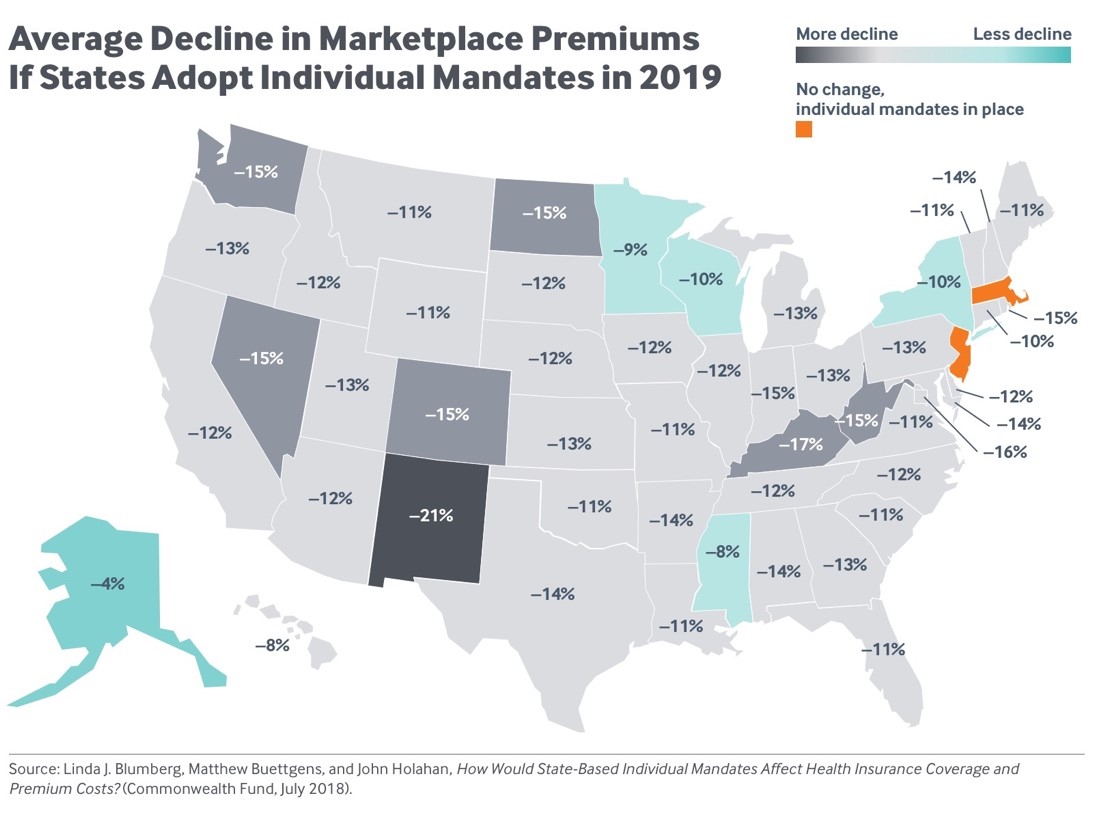 Linda Blumberg, an author of the study and Institute Fellow in the Health Policy Center at the Urban Institute

“Although the repeal of the individual mandate penalty will have negative effects across our health care system, states can act to keep their health insurance markets stable and affordable by offsetting the expected coverage losses and premium increases beginning in 2019.”

“Because of the ACA, more people have health insurance than ever before, and people with health problems can’t be denied coverage or charged more because of their condition. With the repeal of the individual mandate penalty, this report shows how states can exercise their own authorities to reduce the number of uninsured and make insurance more affordable for their residents.”

But if states acted on their own to replace the federal mandate, the new report finds that, compared with having no mandate:

The report outlines the additional benefits of individual mandates for state economies. These include:

By legislating comparable mandate penalties, states can mitigate the negative coverage and premium effects caused by eliminating the ACA’s individual mandate in 2019. Massachusetts, for example, legislated its own individual mandate in 2006 and New Jersey did so this year. Legislation has also been considered, but did not pass, in Maryland, Hawaii, and Connecticut. In the District of Columbia, an individual mandate passed as part of a larger budget bill and is expected to be signed by the mayor. However, there are riders to the D.C. budget in the U.S. House of Representatives intended to inhibit implementation, although it is not clear they would be successful.

The study’s authors note that state-level mandates face significant challenges. Some states, for example, do not have state income taxes, and new financial structures would have to be developed to collect individual mandate penalties. Other state political environments are not conducive to enacting individual mandate legislation, even in states where governors and state policymakers generally support the ACA.