New Survey: Just Over a Quarter of U.S. Adults Favor ‘Medicare for All,’ but Many Need More Information

Commonwealth Fund Survey Also Finds Strong Support for Medicaid Expansion in States That Have Not Expanded Eligibility; Majority of Insured Adults Satisfied with Their Coverage

Slightly more than one-fourth (27%) of adults favor eliminating all private health insurance and instituting a “Medicare for All” system, but 40 percent say they need more information to form an opinion, according to a Commonwealth Fund survey out today.

The Health Insurance in America Survey, fielded between March 19 and June 9, 2019, is the newest in the Fund’s ongoing series reporting on working-age adults’ experiences with, and perspectives on, health insurance, Medicaid expansion, and current health policy proposals, including Medicare for All. Other key findings include: 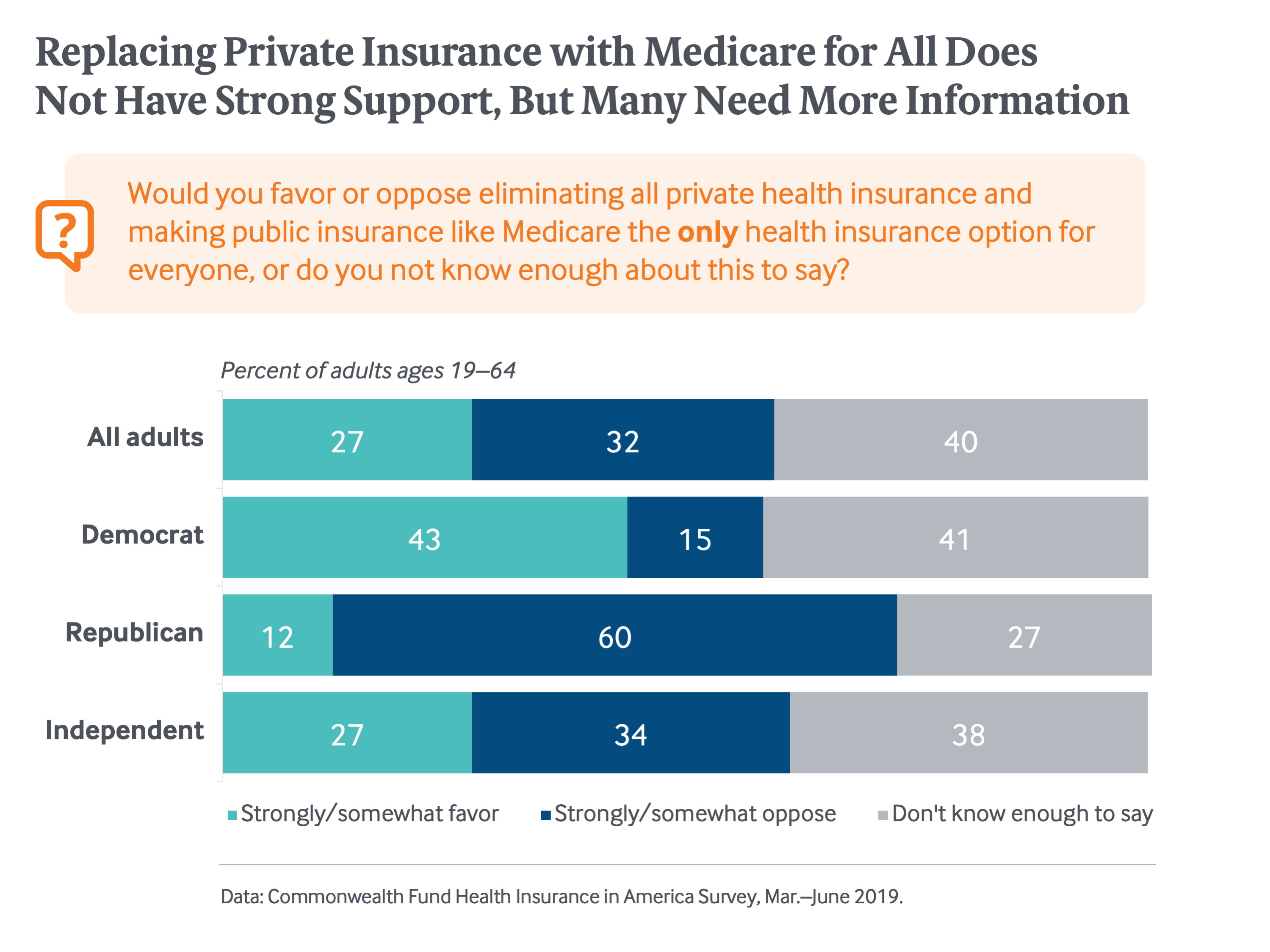 “Millions of people have gained health insurance since the ACA, demonstrating that it is possible for the nation to make progress in improving health care. Unfortunately, states that have chosen not to expand Medicaid are leaving millions of people uninsured and unable to get the health care they need. The survey shows that most adults in those states — 68 percent — believe that expanding Medicaid is the right thing to do. This aligns with what our survey work has historically shown about health insurance — most people want and need good coverage.”

“The current debates about Medicare for All and other proposals to get us to universal coverage in the United States are important because we know that health insurance is essential to people’s health and financial security. However, this survey reminds us that it is also critical to address people’s immediate concerns about their health care and to educate the public on how new policies would affect them.”

While the ACA cut the number of uninsured Americans by nearly half, reduced out-of-pocket spending, and ensured that people with preexisting health conditions can get the coverage they need, significant problems remain. Today, around 30 million people are still uninsured, and, in most states, health care costs are growing faster than median income. With the 2020 presidential campaign already underway, several Democratic candidates have proposed health reform plans aimed at addressing these problems. But the survey indicates that proponents of Medicare for All have some work to do to help people understand what this type of reform would mean for them and for the health care system, the authors note. Given the complexity of health care, this may also be the case for other approaches to reforming insurance coverage, including those advanced by Republicans.

The full report will be available after the embargo lifts at: https://www.commonwealthfund.org/publications/issue-briefs/2019/sep/what-do-americans-think-health-coverage-2020-election

The Commonwealth Fund Health Insurance in America Survey, March–June 2019 was conducted by SSRS from March 19 to June 9, 2019. The survey consisted of interviews conducted via web and telephone in English or Spanish among a random, nationally representative sample of 4,914 adults, ages 19 to 64, living in the United States. Overall, 1,453 interviews were completed via the online survey and 3,461 were completed via phone (either landline or mobile).

Unlike prior years, an address-based sample (ABS) was included in Wave 8. This change in sampling method and mode of response likely affected the trend on some measures between 2018 and 2019. However, the ABS sample was designed to mirror as closely as possible the RDD sampling approach used for the telephone sample.

As in all waves of the survey, the March–June 2019 sample was designed to increase the likelihood of surveying respondents who had gained coverage under the ACA. Data were weighted to ensure the final outcome was representative of the adult population ages 19 to 64. The data are weighted to correct for oversampling uninsured, direct purchase and Medicaid respondents, the stratified sample design, the overlapping landline and cellular phone sample frames for the Omnibus prescreened completes, and disproportionate nonresponse that might bias results. The resulting weighted sample is representative of the approximately 190 million U.S. adults ages 19 to 64.

The survey has an overall margin of sampling error of +/– 1.9 percentage points at the 95 percent confidence level. The overall response rate, including the prescreened sample, was 7.6 percent. This survey is the eighth in a series of Commonwealth Fund surveys to track the implementation and impact of the Affordable Care Act. Prior waves were part of the Commonwealth Fund Affordable Care Act Tracking Survey series.