To control rising prescription drug costs, the U.S. Congress is currently considering legislation to allow the Medicare program to directly negotiate pharmaceutical prices with drugmakers. A bill in the House of Representatives, H.R. 3, would rely on international benchmarks to set upper limits for prices. But according to recent media reports, the Senate is considering using domestic price benchmarks for Medicare negotiations, which could be based on prices paid by the Department of Veterans Affairs (VA) or any number of other government purchasers.

Below we delve into what’s known as domestic reference pricing, including the various pricing benchmarks that Medicare might use in negotiations with drug companies.

What is domestic reference pricing, and what role might it play in Medicare drug price negotiations?

Which benchmarks could be used for domestic reference pricing?

Domestic referencing pricing could be based on one of the current statutory definitions for U.S. drug prices. In order from highest to lowest cost, these include:

The Congressional Budget Office recently released a report comparing these pricing benchmarks to the prices of best-selling drugs in several federal health programs — Medicare Part D, Medicaid, the VA, and the DoD. Despite being the largest program, Part D — which doesn’t use a pricing benchmark — paid among the highest prices. In comparing net prices for high-priced drugs, Part D pays nearly triple the prices Medicaid pays and nearly double those paid by the DoD and VA. 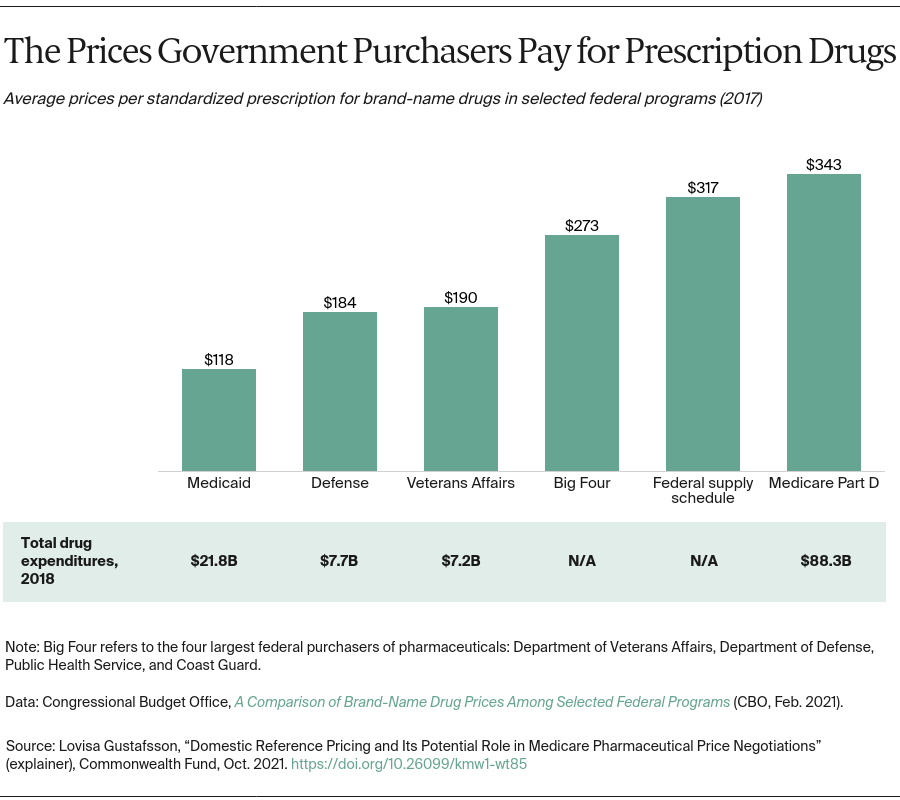 How can domestic reference pricing be used by Medicare in negotiating drug prices?

The domestic reference price could be a percentage of one of the statutory pricing benchmarks listed above. In the Medicaid Drug Rebate program, a discount of 23 percent is applied to the average manufacturer price of brand-name drugs to determine the Medicaid price, then adjusted for inflation rebates. Similarly, a statutory discount of 24 percent is applied to the non-FAMP for brand-name drugs that the Big Four agencies purchase; these prices also are adjusted annually for inflation.

What are the trade-offs of domestic reference pricing?

Unlike international reference pricing, domestic reference pricing is normally based on prices originally set by manufacturers themselves. That means drugmakers would have an incentive to raise their launch prices for new drugs (although a mechanism could be designed to ensure future launch prices are reasonable).

Some policymakers are also worried that if Medicare-reimbursed drugs are pegged to price points that reflect negotiated discounts below statutory ceilings that another purchasing agency received, those discounts might be at risk — as manufacturers would also now provide discounts to the much larger Medicare market. This echoes concerns over international reference pricing, which analysts expect would lead to price increases in the countries that Medicare uses as a benchmark.

Nonetheless, depending on which benchmark is used, domestic reference pricing could bring needed transparency to prescription drug costs in Medicare. And, given the far lower prices that other government purchasers pay, it would likely provide a ceiling below current Part D prices, yielding savings to the Medicare program and its beneficiaries.